Exciting discovery of this new most distant star....will this be in SE soon (as well as the other distant stars mentioned here)?

So cool! Sadly it would hard to be put in SE, I remember there were problems rendering stars in the intergalactic space :'(
The universe is not required to be in perfect harmony with human ambition.

I think even putting the host galaxy, being that distant, into a catalogue could be a challenge.

I'm very excited to see how this and the new (actually very old and now dead) star Earendel will be modeled on space sims like Space Engine.

https://twitter.com/i/events/1511317799284711429
Scientists have discovered a gigantic exoplanet that's still 'in the womb'
Researchers have observed an enormous planet — called AB Aur b — that's about nine times the mass of Jupiter, and is at a remarkably early stage of formation.
It's providing new insight into our understanding of the universe, and the "complex and messy" nature of planet formation.
Top

I think even putting the host galaxy, being that distant, into a catalogue could be a challenge.

It would be interesting to see how comoving distance is implemented in SE.  This is the explanation I wrote when I posted this on my blog.

Now ask how we can see a star that is 28 billion light years away when the universe is supposedly half that age lol.  The key is the word "comoving distance"  meaning the star was likely less than half that distance away when the light left there and space has expanded that much in the time it took for that light to get here.  And that star likely went supernova and died out billions of years ago (which we might detect in the distant future-- if we are still around lol.)
Top

I think if SE supported proper spacetime travel, things would be somewhat confusing (but perhaps interesting).  So within a solar system I don't think the effect would be noticeable in practice. Within a galaxy, if you go to a distant star, it would move as you approach it due to proper motion of the stars, but again the effect would be minute even if the distance travelled would be thousands of lightyears in a few seconds.  Intergalactic travel, however, would be interesting.  You would see galaxies spin gently when you approach them.  Going between the Milky Way and the Andromeda galaxy, you would see 2.5 million years of galactic evolution play out.  And on the grander scale of galaxy clusters and the galactic foam, things would become extremely weird.  You would watch the evolution of the entire universe play out as you move at speeds in the order of millions of lightyears per second.  You would never be able to travel into any kind of large scale galactic structure as they would change beyond recognition before you can approach it.  Things would be very weird.  Evolution would go in fast forward for things that you approach, but backwards behind you.
NIL DIFFICILE VOLENTI
Top

Veritasium's video about it here, https://youtu.be/Q1bSDnuIPbo along with his older explanation of what exactly we are looking at (what does the shadow really represent?). But the best bit is his explanation of how interferometry works. It's a wonderfully intuitive one that I don't think I have heard described in this way before.

Some actual science results from the imaging, including a couple of surprises. The size and shape of the shadow of course were not surprises and matched GR's predictions to within limits of precision. But some unknowns that have been resolved are that the accretion is in a magnetically arrested disk (MAD) state, which means the magnetic fields are strong and break the accretion flow up into distinct chunks. (Neat computer simulation of a magnetically arrested disk here: Youtube: Relativistic Jets from Magnetically-Arrested Prograde Black Hole Accretion. The disk becomes magnetically arrested after about 1 minute into the video.) We also have some weak constraints on the orientation of the black hole (it seems to be facing largely towards us at about 30°, rather than more edge-on at 90°). It is also spinning prograde with a spin parameter of at least 0.5, and quite possibly 0.9 or higher.

Which models in spin/orientation parameter space pass or fail observations. R_high is another parameter representing the ratio of proton to electron temperature in the plasma. 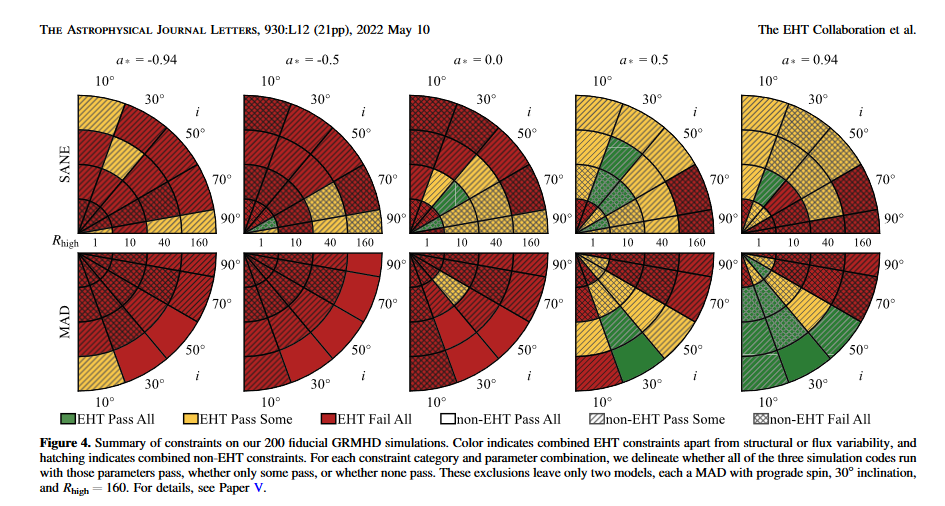 Examples of two models, left is a good fit, the right we can rule out:

I'm surprised and a little disappointed by the orientation. I expected a little tilt (there is not a strong reason to expect it to be perfectly edge-on, and other observations such as the derived motion of hotspots around the accretion disk suggested to expect some tilt), but I did not expect it to be facing towards us this much. It's very similar to M87's orientation. I would have liked to have seen a more edge-on orientation with the disk crossing in front of it.

Concerning orientation: Is there any reason to think that the nearby stars rapidly orbiting give any hints?  Or to assume that these stars formed along with the black hole and that way at some time shared momentum?
NIL DIFFICILE VOLENTI
Top

Concerning orientation: Is there any reason to think that the nearby stars rapidly orbiting give any hints?  Or to assume that these stars formed along with the black hole and that way at some time shared momentum?

Yes, there are some subtle hints. Perhaps counter to intuition, the spin of the black hole has little to no relation to the orbital planes of those stars, or the galactic disk. This is because the black hole is the result of possibly many mergers over the life of the galaxy, and each merger involves adding the spin of another supermassive black hole with a random orientation. We've looked at the spins of several supermassive black holes in other galaxies (via their jets), and they are indeed fairly randomly oriented relative to their host galaxies.

We might instead wonder if the spin of the black hole shifts the orbits of nearby stars over time, through the frame dragging effect (Lense-Thirring precession). This effect is strongest very close to the black hole of course, and negligible for the galaxy, but the nearest of the S stars experience some measurable precession because of it. (There is also another precession caused by general relativity regardless of the spin -- the same effect that was noticed in the precession of Mercury's orbit around the Sun.)

There are two challenges, however. First is that each star only lets you place an upper bound to the spin and inclination. It's kind of like how when using the radial velocity method to detect exoplanets, if you don't know the inclination of the orbit, then you can only infer the minimum mass of the planet. So the method doesn't give you a definitive answer, but rather narrows down the possibilities. The second problem is that uncertainties in the measurements of the orbits and precessions of the stars can be significant. Still, this technique has been used and was good enough to get some useful answers. (For example, it was able to rule out the spin axis being aimed directly at us.)

Many people have also wondered about the Fermi bubbles, the two enormous x-ray and gamma emitting clouds above and below the galactic center. If we think of them as the remnants of black hole jets from enhanced activity in the galactic center millions of years ago, don't they imply that SgrA*'s spin axis is perpendicular to the galaxy, and hence we should see its accretion disk edge on? Clearly the EHT observation says no, but we knew that reasoning was suspect anyway. Those bubbles may have little to do with jets at all. In fact they may have been a more omnidirectional outflow at first. The reason they extend more above and below the galactic plane is simply because those are the directions in which the density of the interstellar medium decreases most quickly. The bubbles follow the path of least resistance.
Top

Sorry to change topic but there's a very nice recent paper about the possibility of having rings around exomoons and how to spot them in transit light-curves. It seems that there are some possibilities for detection. And importantly for SE: the configuration space for these systems is not so restricted as expected (they tracked some ways as to how these might be formed), so perhaps we could see this as a realistic feature in SE (they even show that the ring structures of these moons would be dominated by the resonances produced with the planet spin). Apparently the term coined for these ringed moons is "Cronomoons". 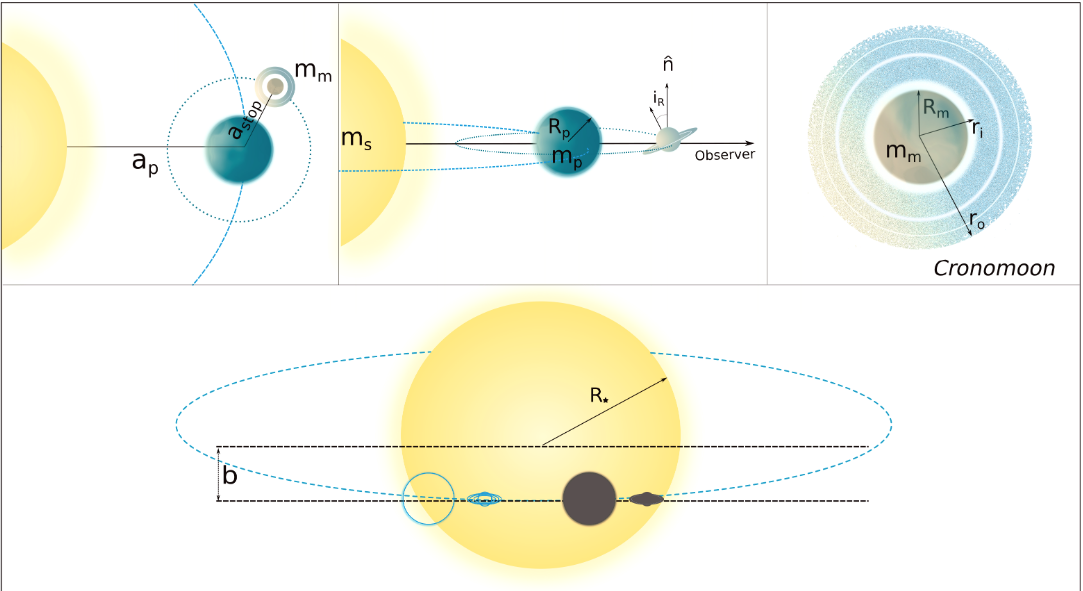 One researcher that I know was in the team that discovered a galaxy cluster acting as a gravitational lens and now this object has been selected as the first target to be observed for the first science programme to have data taken in JWST Cycle 1.  How cool is that?  Release in a few weeks.  The target looks like this: