Let's continue the thread in the old forum

It's been a warm year in the Arctic.  Longyear airport at 78N managed to average +0.1C for the year, which I believe is the first time a yearly average above 0C has been recorded in Spitsbergen.  Only a few days in 2016 had lows below the normal temperature for those days.

that really amazing how the arctic get so much warmer than average this time in the year.
what is more strange is that my area this month had much colder than average. 2.3c below average december.
i hope soon it get colder up there. i think scandinavia will get below -10c in the coming days if i checked right.
i also became very interested in weather system and i started to look on 500hpa, 850hpa maps of europe. also get me excited to when snow will come to my town (been 2 years since the last snow) i love the winter and i love to invastigate weather

Spacer wrote:
that really amazing how the arctic get so much warmer than average this time in the year.
what is more strange is that my area this month had much colder than average. 2.3c below average december.

It's been pretty wild.  In my neck of the woods we've been much colder than average as well.  Sure enough, this has been the general pattern for much of the northern hemisphere. The atmospheric circulation has been causing the Arctic's cold air to spill southward, and conversely the Arctic gaining the warm air.  Like leaving the fridge door wide open.
Top
Watsisname

My area has been colder than usual (nowhere close to snowing, though) and it has been raining on and off for the past month or so, which is rather strange as rainy weather rarely lasts longer than a few days.
Bananas are eggcellent.
Top
Banana

December at Longyear airport was the 73rd consecutive month with a temperature above the normal (defined as the 1961-1990 averages).  That's a pretty long "heatwave".  And it shows that the climate in the Arctic is quite different from the rest of the world.
NIL DIFFICILE VOLENTI
Top
midtskogen

after a rainy and stormy december...we got very dry january.
the average rainfall here on january is 140mm, but until now we only got 2.6mm
if it will continue like that until march (the end of the winter here) we will have one of the worst winters in recorded history.
we only got 195mm this season out of 550mm average.
this winter seems to kick strong in center-east europe around greece, italy and the balkans, but it seems storms avoid going south east more south to turkey-lebanon and that why we get serious drought
"man cannot discover new oceans unless he has the courage to lose sight of the shore"
-Andre Gide
Top
Spacer

We've had a few days of fog and freezing drizzle here in Oslo.  When moist air from the ocean cools to below freezing above the cooler land, droplets of water don't immediately freeze.  That happens only when they hit particles in the air, or hit the ground.  This is somewhat different from freezing rain or an ice storm, when temperature inversion causes rain to freeze on the ground.  I hope I get a chance to get some shots of the forest when the fog lifts, which is becoming pretty coated in ice, in particular in places where there is a slight breeze.  Currently, visibility is 50-100 meters or so, so only close-ups are possible.


This poor birch is beginning to crumble under its own weight: ► Show Spoiler
When it comes to icing, it can be extremely foggy and windy in parts of the mountains, among my favourite weather related pictures are the ones below, taken in 1961 near Voss in Norway.  During the winter the energy company had noticed some power irregularities, so in the spring a crew put on their skis to inspect the power lines.  This is what they found.  Ice had grown around the lines reaching a diameter up to 1.5 m.  It's pretty amazing that the power lines didn't collapse. Those are such great photos.  The effect I think is visually even more impressive than a typical ice storm from freezing rain.

Nothing like that tends to happen here, though definitely we're getting lots of the other frozen stuff at the higher elevation: 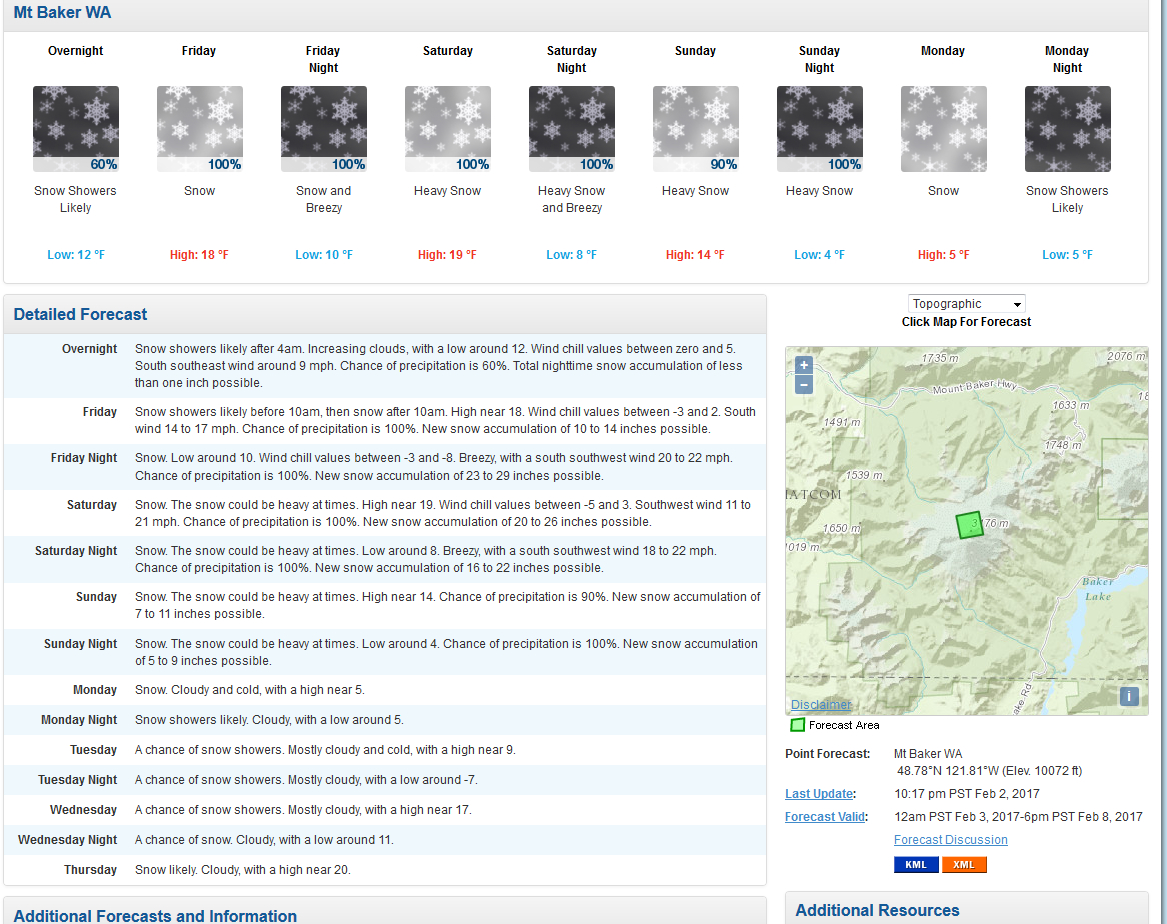 As it so happens, the world record for most snowfall recorded in a year was placed there: 29 meters in the 1998/1999 season.  Unlikely to beat it this year, but it's been a pretty good one and a lot more coming.
Top
Watsisname

wow, that lot of snow. i miss snow, didnt see snow for 2 years now. but what cool about snowfall here is that if its happens, it comes with lot of snow. because of the sea snow effect. when it comes over the warm mediterranean sea and get lot of humidity and water. then when it reach the land it snows a lot. in 2013 we had half meter in 2 days.

Watsisname wrote:
As it so happens, the world record for most snowfall recorded in a year was placed there: 29 meters in the 1998/1999 season.

How is that measured?  At a level place which is measured and swept clean once a day?
The wettest place in Norway is on a glacier with an estimated annual precipitation of 5600 mm, much of which falling as snow.  I suppose the world record is mostly about doing actual measurements in the right place.
NIL DIFFICILE VOLENTI
Top
midtskogen

midtskogen wrote:
Source of the post How is that measured?  At a level place which is measured and swept clean once a day?

You bet.  Any such measurement must be reviewed and demonstrate good methodology before being accepted as an official world record.

For snowfall records, it really is mostly a matter of where official measurements can be made.  Nobody stays on a remote mountain top year-round to carefully record such observations.  And in this case the record is also only a shadow of what falls at the higher elevations.  The recording station is at the ski area at ~1280 meters.  The wet season starts in late September to early October, but at that elevation it doesn't reliably become snow until late November or even December, and in Spring it transitions back to rain before the dry season kicks in.  If you go a little higher then the annual snowfall is much greater, and on the mountain itself (3280 meters) it pretty much only falls as snow -- thus why it is completely covered in glaciers.  But of course, nobody stays there to make measurements.

It would be interesting to know where the annual snowfall really is the highest and how much that is.  The general factors you need are a lot of moisture, terrain to force the moisture to precipitate, and cold enough temperatures for snow.  So coastal mountain ranges generally take it.  The North Cascades have a particularly strong claim since there is a nearly continuous blast of moisture off of the Pacific throughout the winter, which immediately rams into the mountains, and among the mountains are individual high volcanic peaks which catch even more of it.
Top
Watsisname

midtskogen wrote:
Source of the post It's been a warm year in the Arctic.

I miss it too

Xoran wrote:
Source of the post I miss it too

there is no snow in denmark?

its so north!
"man cannot discover new oceans unless he has the courage to lose sight of the shore"
-Andre Gide
Top
Spacer

Spacer wrote:
Source of the post there is no snow in denmark?  its so north!

There is, but very little. Stupid global warming.
Space is too big to understand, so do not try to understand.
Top
Xoran

Xoran wrote:
Source of the post I suspect climate change.

For the general trend of the Arctic warming faster than the rest of the world, yes, but the conditions this year have more to do with the state of the atmospheric circulation and how heat is transferred between the Arctic and the surroundings.  (There's a reason the winter has been widely cold and turbulent in the mid latitudes).

There could be a connection between climate change and changes in the atmospheric circulation, and there is research suggesting that this is the case, but the details are much less clear.

Another funny fact with global warming is that in some places it can increase the amount of snowfall.  Intuitively, global warming will make the snow line tend to move poleward and rise in elevation.  But as long as it still gets below freezing, then it can still snow, and in a warmer world you could get more snow since the precipitation patterns can change and in general there is more moisture in the air.
Top
Watsisname
Post Reply