Here I shall describe my Mother Spaceship concept. My goal here is to achieve physical realness, except for the energy generator, hyper-drive and other technical details about interplanetary drives, etc.

1) The ship is several kilometres in length and between 100-200 meters in diameter.

2) The ship uses a rocket engine propulsion system. The engines are identical and placed symmetrically on the ship. In addition for reasons of realness the ship is similar in layout to a skyscraper building, instead of the submarine design which we are so accustomed to seeing in games and movies. The engines are at the bottom of the ship and therefore when flying with acceleration, the "gravity" will be directed "downwards" towards the engines.

3) Engines and tanks contain a working substance in them (the reactive mass), which occupies 30-70% of the ship's volume. It is important to consider how the engines are arranged, as they're not chemical, I.e. the energy source and reactive mass (working-substance, propellant) are different things. The engines are very powerful, and can accelerate the ship to 5-10 G, and has a stock characteristic speed ("delta-V") in the order of 1000-10,000 km/s from just one refuelling. (It gives the ship ability to change speeds. I.e. the ship can be accelerated to 100 km/s and stopped several times just from one refuelling). The working substance is crystallized hydrogen, water and some other thing that can be easily collected from space.

4) The energy plant is a separate reactor or combined with engines (fusion engines allows to produce electricity). In the second case, some energy batteries (quantum condensers?) are needed to power ship systems then engines are shut down.

6) There is an anti-meteorite shield in the forward part of the ship. Flying at a speed of 1000 km/s in the interplanetary zone will create the effect of a continuous bombardment of sub relativistic micrometeorites. The shield itself may need to be replaceable, or have separate replaceable modules, or maybe have some kind of magnetic energy shield. The shield should cover all parts of the ship against the flow of space matter; it is therefore necessary to place it more compactly and closely to the longitudinal axis.

7) The cargo and habitation modules are placed behind a meteoric shield, surrounded by a radiation shield. On its surface there are different hatches, air-locks, hangars, viewing decks, telescopes and other sensors, weapon loop-holes etc. What's important is that it's all covered by the forward meteoric shield.

8) If rendering for indoor-scenes are implemented in the engine later, it will be possible to model the interior layout of habitation module. Then it will be possible to walk around the ship too. The ship's layout is similar to a skyscraper, with an internal system of transport (with lifts and escalators). The direction of the floor would run parallel to the length of the ship. There are hand-rails and short flights of stairs located on the walls to aid movement in weightlessness when engines are dis-engaged. At the center of the bridge is the control center where everything is managed, with its panoramic displays, armchairs, diamagnetic jacks of inertia and other such things. Monitor displays would be holographic and look like windows - the player will view external space through such monitors. It would be interesting to conceptualize another layout mode with artificial gravity with the rotation of the ship around the longitudinal axis, where the external walls will become the floor. It's possible to make some parts of the habitation module rotatable: When the ship accelerates, gravity will be directed to the floor of the module, but when the ship shuts off its engines it will switch the habitation module into rotation mode, the module will turn at 90 degrees, so centrifugal "gravity" will again be directed to the module's floor. Windows aren't present on the ship, only the special observation deck will have them. And of course, windows will not be on the external part of the meteoric shield

9) The ship has on-board factories, where new shuttles, modules and other devices can be manufactured using resources taken from planets or synthesized by on-board nuclear-conversion reactors.

10) The ship can fly faster-than-light. The currently approved concept is the Alcubierre warp drive, so ship must be equipped with two or more large "hyper rings". Look for the default SE ships called "Explorer-1", "Explorer-2", "Doctor Ship" for reference.

11) The Mother Space Ship cannot land on planets. Instead it carries various shuttles, specially designed to fly from space down to planets with atmospheres or airless worlds. Besides shuttles, there are also some repair, cargo and harvesting vessels.

12) There are special vessels with a ram-scoop for collecting hydrogen from atmospheres of gas giants (hydrogen is the propellant for the main engines). Though it is possible to place a ram-scoop behind a meteoric shield. The shield opens up as a bud and puts forward a ram-scoop. Another way to resupply the main ship is by using collector boats for harvesting, for grabbing ice formed comets or icy moons, etc.

13) There are no limitations on the number of polygons for the models, due to development of technology of adaptive and/or procedural detailization of the ship and its parts. In the beginning, it will be possible to make each part of the ship's model with an independent set of LOD's. The ship would be built with several replaceable modules - engine, reactor, cargo etc. So this shall provide a good system of upgrade for the ship later. 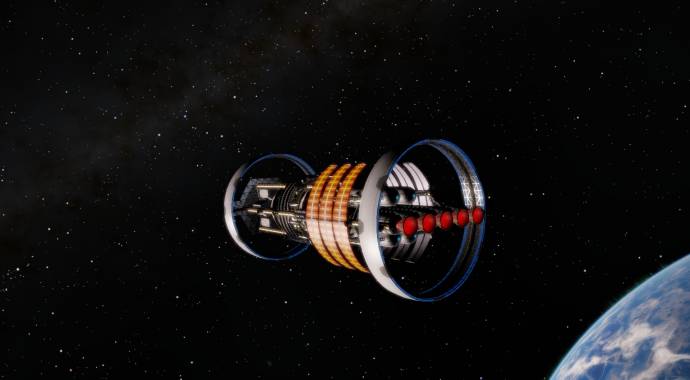 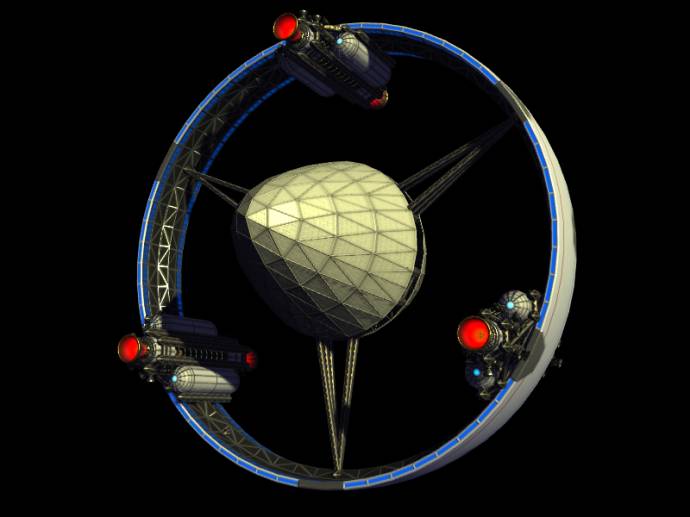 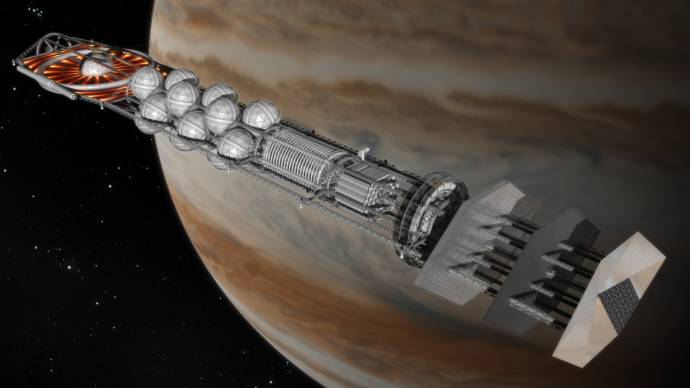 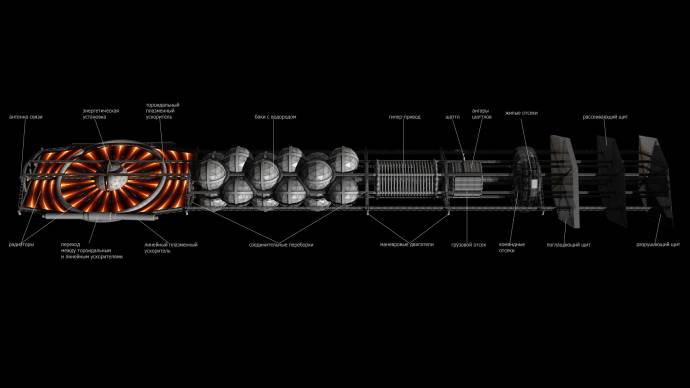 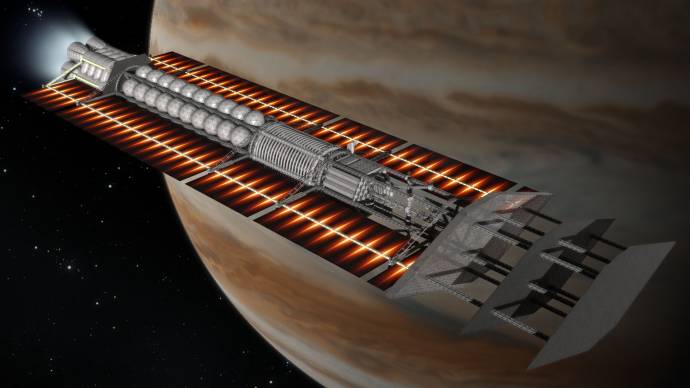 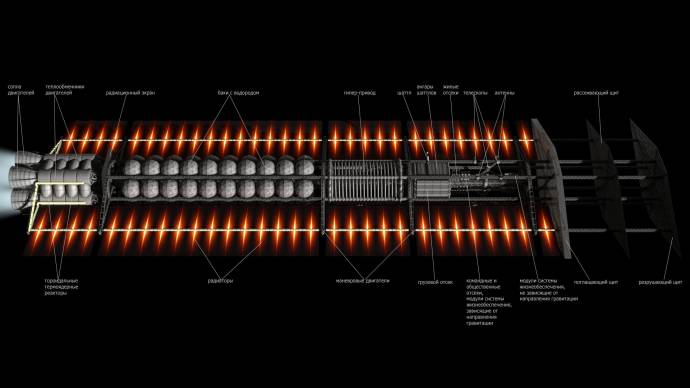 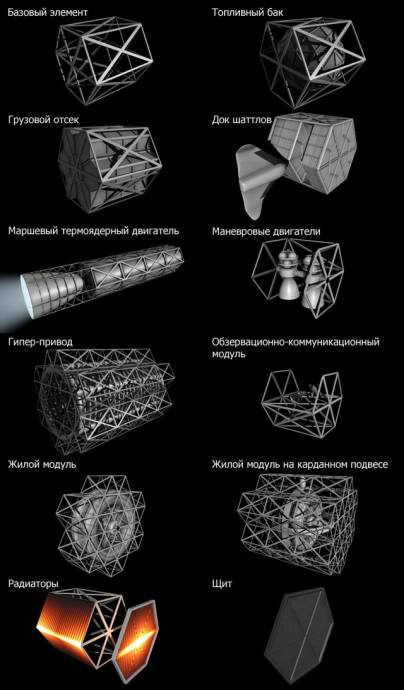 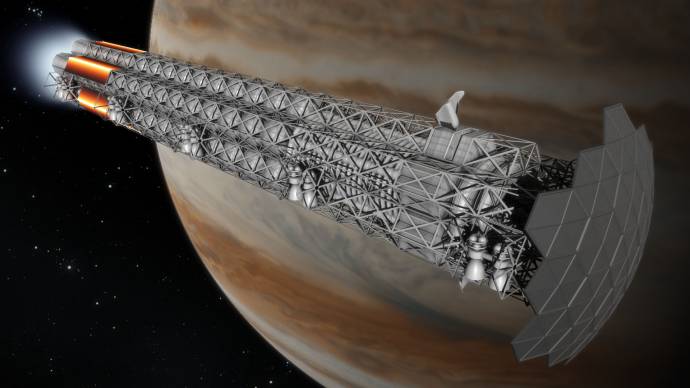 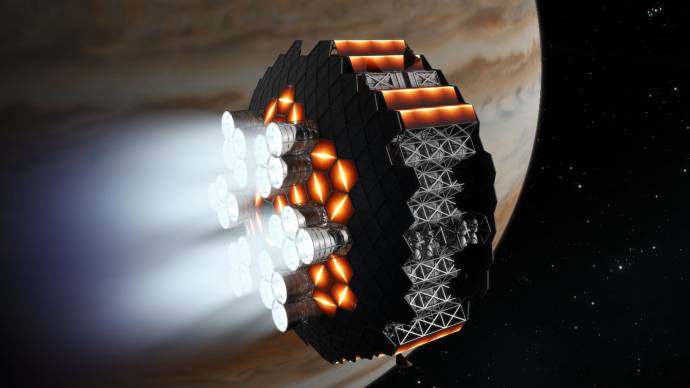 Very nice !
That would be Cool to have an observation deck to hang out in, and view the planet below!

As long as the thread's already been bumped, I'm curious to know how much, if at all, the mothership concept has changed by now and how the existing ship editor and its sample ships stack up against it.
For instance, reading through the specifications above it seems SpaceEngineer was imagining something like a torchship that would keep its main engines running most of the time, while the editor seems to be mainly focused on ships that spend most of their time in warp or inertial cruise.
ᴩʀoʙʟᴇᴍᴇᴄɪᴜᴍ﹖
Top
problemecium

problemecium wrote:
Source of the post it seems SpaceEngineer was imagining something like a torchship that would keep its main engines running most of the time,

That was never the plan.  It takes a lot of fuel to keep burning, the plan was always to have an FTL system help in transit time and only accelerate to a few 10x of km/s.  The only thing that has changed, and the concept was updated to reflect this, was the addition of the Alcubierre drive.
CPU: Ryzen 9 5900X @5Ghz - RAM: G.Skill Ripjaws V 64 GB (2 x 32 GB) DDR4-3600 CL18 - GPU: EVGA GeForce RTX 3090 FTW3 ULTRA GAMING 24GB
Quando omni flunkus, moritati
Top
DoctorOfSpace

See that makes sense, but in the OP there's a bit about how the ship is designed like a skyscraper with cabins oriented along the axis of thrust, which wouldn't be useful if the ship only spent a fraction of the time generating artificial gravity using the main engines.
ᴩʀoʙʟᴇᴍᴇᴄɪᴜᴍ﹖
Top
problemecium

problemecium wrote:
Source of the post designed like a skyscraper with cabins oriented along the axis of thrust

The sections on the habitation ring rotate in the direction of acceleration.  This means when accelerating the outer part of the ring is facing in the direction of the engines and when coasting it is facing outward from the ring as they rotate.
CPU: Ryzen 9 5900X @5Ghz - RAM: G.Skill Ripjaws V 64 GB (2 x 32 GB) DDR4-3600 CL18 - GPU: EVGA GeForce RTX 3090 FTW3 ULTRA GAMING 24GB
Quando omni flunkus, moritati
Top
DoctorOfSpace

Re-reading number 8, it seems like SpaceEngineer had originally thought up a torchship-esque design with parallel decks but later warmed up to the idea of radial decks with centrifugal artificial gravity, which happen to be what the Editor program builds.

As for me I've just been figuring that the captain puts out an announcement when the ship is about to start a burn and then everyone gathers in special sections where they can strap in (or in relevant cases enter a fluid-filled acceleration capsule) to ride it out.
ᴩʀoʙʟᴇᴍᴇᴄɪᴜᴍ﹖
Top
problemecium

I tried to create with blender a project for the habitation ring...
every cylinder can contain a 6m x 12m x 4m habitation space.
in acceleration the floor rotates 90 degrees and it aligns with doors to connect to the rest of the ship.
in my idea the ring rotates with magnetic rails placed above and below... ettore_bilbo, it would be great if you make the module compatible with SHW's ship editor. You may extract the hab module from the editor's files (modules/toroidal_living_module.obj), load it into blender and use to scale/align your module with it. Then with maybe help of SHW it could be imported into editor.
Top
SpaceEngineer

SpaceEngineer wrote:
Source of the post Then with maybe help of SHW it could be imported into editor.

SpaceEngineer wrote:
Source of the post ettore_bilbo, it would be great if you make the module compatible with SHW's ship editor

DoctorOfSpace wrote:
Source of the post It's actually pretty easy to import custom objects into the editor since all the scripts can be easily edited.

Hi DoctorOfSpace, May I ask you if it's enough edite "module.js" or there is more to do?
there's some trick to keep in mind in the export of obj? triangulation and materials for example...
Top
ettore_bilbo

ettore_bilbo wrote:
Source of the post triangulation and materials for example...

DoctorOfSpace wrote:
Source of the post I remember posting on the old forum about it so if need be I can check there.

thanks... I'll try to look in old forum.
I tried import yesterday but model was not loaded and I don't know if is a problem with scripting or obj materials...
Top
ettore_bilbo
Post Reply