Created and originally posted by SHW on the Russian forum here. This is a repost of the HarbingerDawn's repost on this forum. This is a slightly updated version (with some new modules) running on the SE website hosting. A WebGL-capable browser is needed.

This is a prototype spacecraft editor for Space Engine. You can use it to create a spacecraft model from pre-made modules.

Modelling video tutorial
It is in Russian, made in old editor and with SE 0.962, but good anyway.

The whole interface consists of a single window with a workspace for constructing the ship, and several toolbars. - In the upper left panel are the file options:

- In the top center are buttons to toggle the modes of symmetry with respect to the main axis of the ship. The options are no symmetry, two-symmetry, three-symmetry, and six-symmetry. This applies to both adding and removing modules.

- In the top right are buttons to toggle showing/hiding of:

- Several sliders to control the grid and shields:

The ship is build from modules mounted to a framework. The framework itself, in turn, consists of longitudinal bars for the transmission of loads from the main propulsion engines to other elements, and crossbeams are used to increase the stability and rigidity. All modules are attached to a triangular grid with 15-meter steps in the transverse axis and 10-meter steps in the main axis of the ship.

The components can be divided into four classes with different ways to add them:

Exporting ships to SpaceEngine
To transfer your ship into SE, select "Export spacecraft SpaceEngine *.sss" (4th button from left on top) and save into <SpaceEngine directory>/addons/models/spacecrafts/ (create the folder if it does not exist). Then you must slightly edit the .sss file, because editor is a bit outdated. Open it with a notepad, and you will see a code like this:

All other parameters in the code are okay. Example of the updated code:
Code: Select all

Save the updated file and try out your ship in SE. You may change global orientation and offset of the model using a ship editor which is built-in in SE. Read more about this here. 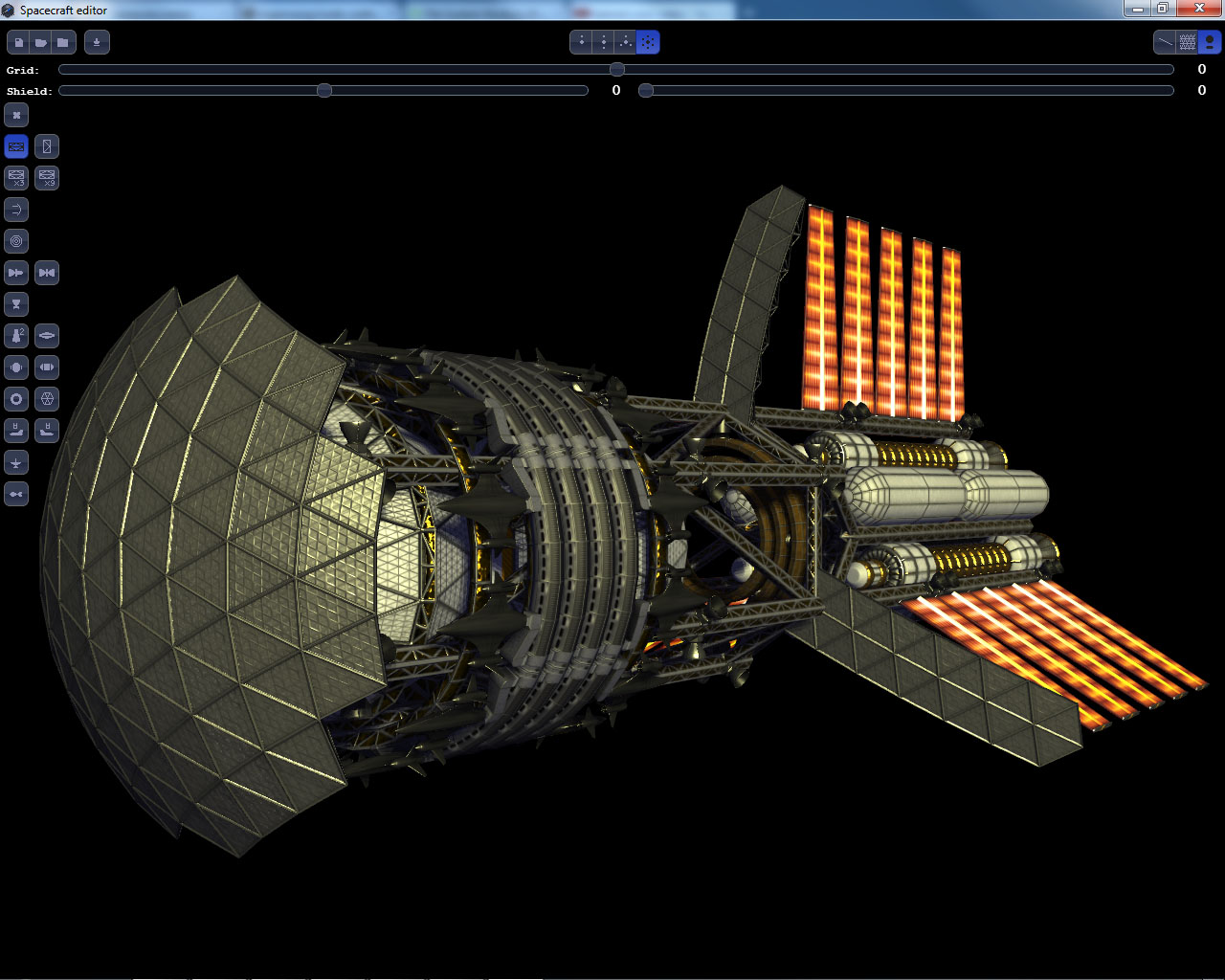 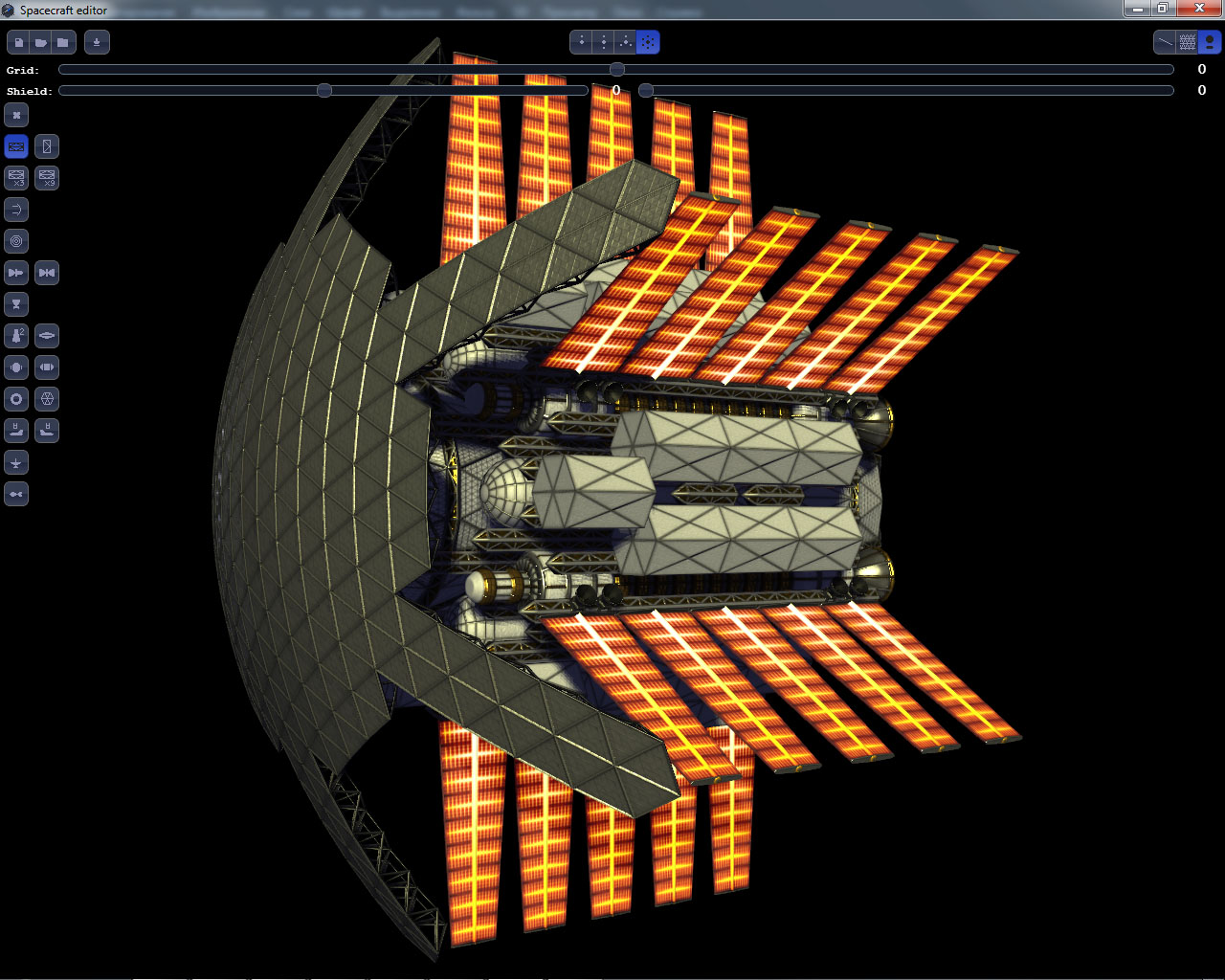 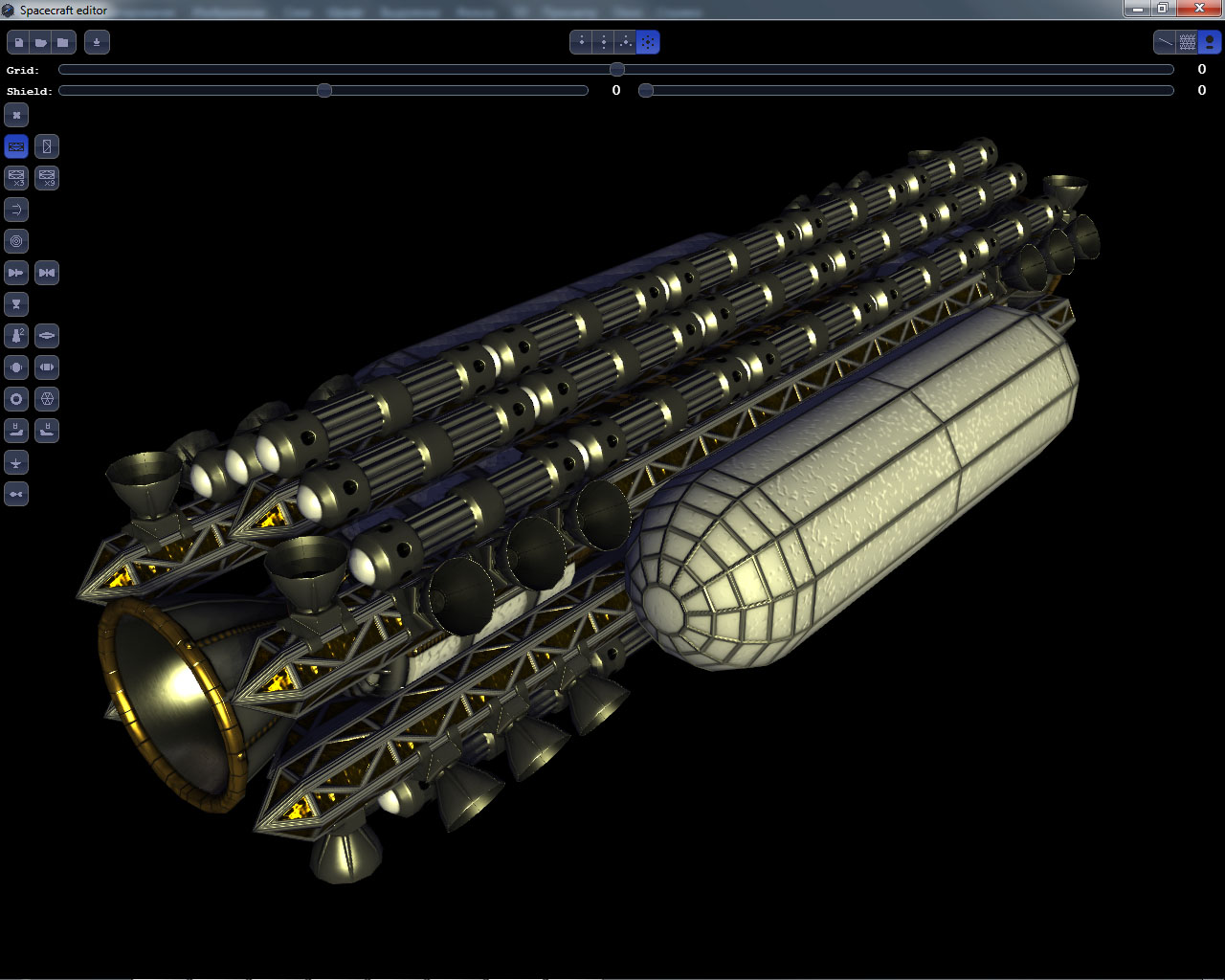 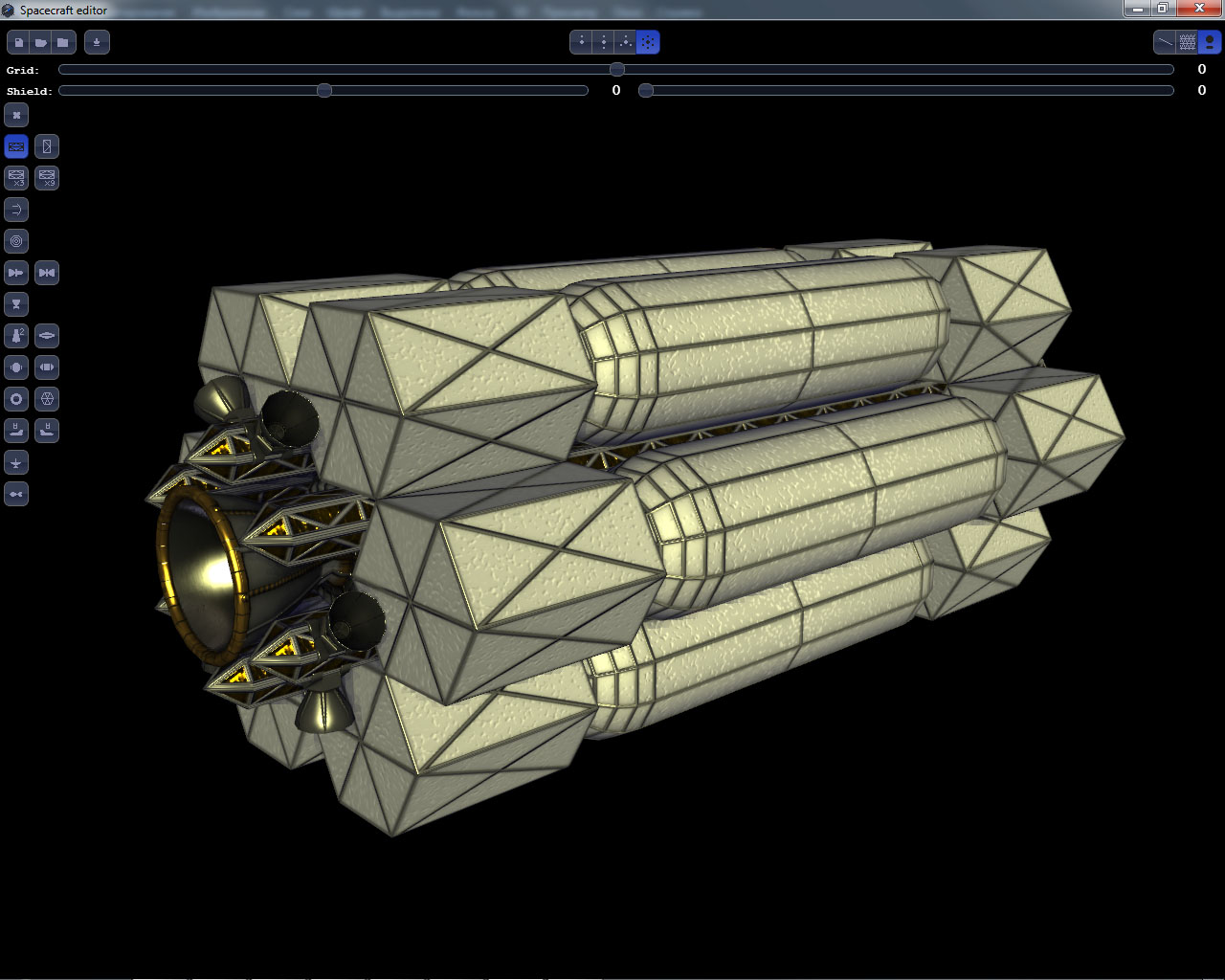 Updated probe (one of the default ships). Very lightweight unmanned craft, capable to reach 33G acceleration (even thrusters are capable of 1.7G). Heavy gauss gun ship (600 thousand tons). Capable to reach 14G acceleration with reversible engines, which enable high manoeuvrability. Does not has warp drive, it must be carried into the system by a large warp carrier (in development). The gauss gun (coil gun) passes through entire ship along its axis (I used old warp drive module as a coils). This means that to aim the target, you have to rotate entire ship. This allows to protect it with shields only from the nose side. Shields does not cover the engines though, because they are reversible. The ship is capable to perform even if lose several engines. Shields are made from hi-reflective material to reflect enemy laser fire. The ship has a lot of shunting engines, but they are capable to achieve only 0.5G - the ship is too heavy. To make a dodge, you have to rotate the ship a bit and make a burn with main engines. This limits the ship's tactical capabilities, because it lose aiming on the target while doing this. The ship also has a several missiles to protect itself in a close-range fight. The ship has just two tanks with main propellent, which limits its delta-V capability. Taking into account powerful engines, tanks can be dried out within just few minutes. But this is okay for such type of ships, delivering to the target attack vector is performed by the warp carrier.

The ship has little amount of heat radiators - they are unable to cool all 14 engines during a continuous acceleration at a 100% thrust. But this ship must never be used in such mode - real battle is performed in a series of short powerful burns. Losing of several radiators does not affects ship's performance significantly. Note that the ship is rotated by 90° in the SE built-in editor (the rotation data is stored in sss). Take this into account if you want to re-import it from json.

YAY new spacecraft editor / update! Wait - this isn't new at all! In fact it's old. Why has this one been linked instead of the more recent one from last November?
BTW, where would one such as I go to make feature requests for this?

Also, whenever I try to go to any thread in the Russian forum I receive a "403 Forbidden" error page. Is the website configured to disallow plebian American nubs from accessing the glorious Russian forum threads? xP
ᴩʀoʙʟᴇᴍᴇᴄɪᴜᴍ﹖
Top
problemecium

I bring to you...The Fjordmaker!
(An absolutely ridiculous design) problemecium wrote:
Source of the post Wait - this isn't new at all! In fact it's old.

Yeah, where are the live cargo and military cargo modules from the update posted in the old forums?

Anyways, here's a ship of mine. I call it: Vega X This one was made with the november ship editor update.
My Mods(Old Forum)
My Mods(New Forum)
"I think of space not as the final frontier but as the next frontier. Not as something to be conquered but as to be explored." - Neil Degrasse Tyson
Top
Ostarisk

Hornblower wrote:
Source of the post (An absolutely ridiculous design) DoctorOfSpace wrote:
Source of the post Hornblower,a better design but somehow I don't think it would have that level of capability given how much mass that ship has.

Editor computes maximum acceleration by dividing summary thrust of all engines by summary mass of all modules, and writes it to sss file. Engines has ridiculous thrust of 6000 tons-force, but otherwise ships would be as slow as a probe powered by ion engines.
Top
SpaceEngineer

SpaceCraft editor 3.0 coming soon. So, i will be happy while ending it.
Top
ePayload
Post Reply