by HarbingerDawn
SpaceEngine contains many, many catalog objects, and only a tiny number of them have descriptions in the database files (these descriptions are what show up in the Info section of the 'Wiki' window in SE). Writing descriptions for objects is a very time-consuming task, so it's hard for SpaceEngineer and the few people who help him to find the time to do it. 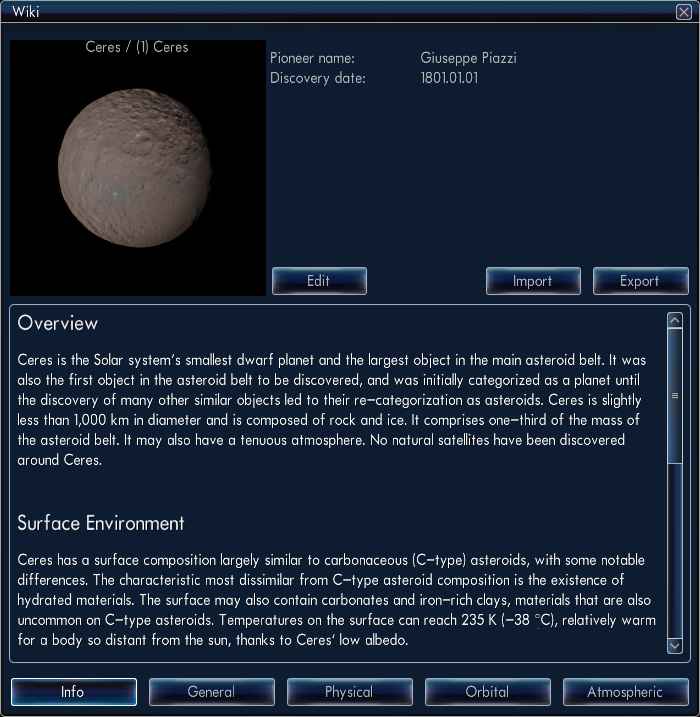 by ARBB
Wait a second, this sounds awfully familiar.

by Mosfet
I was just writing few lines for Oberon and Titania. This should cover with some contents all major planets and moons of the solar system for the Italian database.

by Heath
The hardest amount of info is for asteroids. Most information that I drag up on some of these asteroids only are like one or two sentences like "It exists" and that is all. For example, asteroid 334 Chicago literally only has one sentence about it on Wikipedia and everything else that I find on it is more about the guy that discovered it than the actual rock itself.

by Mosfet
I don't know if it's done yet in languages other than mine, but I think it could make sense from an amateur astronomer point of view to cover all objects which are directly visible with small instruments first, most famous Messier objects, for example.
And of course all main planets and moons of the solar system, which are been studied somehow with a probe. This because they are those with the most available sources.

One-liners should be the last, if covered at all. Then again, for many asteroids there many papers publicly available mentioning some of their characteristics, that are "hardcore" science and difficult to synthesize in a wiki page.

The part about there being hardcore evidence for them is not so much the issue (because most of the hardcore info about a nebula or an asteroid for example is already in the game files on the left side of the screen when you click on a known object) but so much so in the actual information such as an object's full description like a planet such as our own or a more famous asteroid such as Hale-Bopp. The nebulas, asteroids, star clusters, etc that we know of in real life that are just slapped on with a random number and letter pattern (i.e. asteroid 1999 US3) doesn't have a long and lengthy description like other objects (again such as Hale-Bopp) that have been observed more frequently and most of the time, you can't get info on who found it, the story of how it was found, etc. So that is what I was just mentioning in reference too was just how some of them are going to not have as much information as other well known objects in the sky. Not saying there isn't any info, but just a whole lot less.

by darth_biomech
But are locale folder moddable? I tried to create descriptions for a few of my custom planets, it didn't showed up in SE, "info" tab is greyed out.

by JackDole
darth_biomech,
you can add descriptions to each object with 'Edit'. by darth_biomech
Well, yeah, I have locale\eng-db.cfg in my addon's folder with an entry for one of the planets, but it doesn't show up in the program.Or it should only appear if it will be in data\locale\eng-db.cfg of the main root?

by DeathStar
A few years ago, I made a thread similar to this on the old forum. Unfortunately, nothing much came of it, but I'm glad to see a similar project get started up. Anyways, here's my own cfg file I've done during the old project(which can still be downloaded on the thread). It contains entries for the Moon, Io, Europa, Ganymede, and a few minor asteroids and comets. If there's any problem with the file(since it was made several versions ago), let me know.

by JackDole
DeathStar,
if someone would use your file, he would overwrite the original file. This can not be the purpose.
It would be better, you save your extensions as 'user-eng-db.cfg', in the folder 'config'.

Well, I thought that there will be some sort of compilation of all the submitted cfg files in the OP itself(or that the submitted files are collected, vetted and then added to the next version) rather than having to be manually downloaded individually by a user reading the thread, so I don't really think it's a major problem. But I'll keep your advice in mind in the future.

The wiki has an option "import" to merge db files. However, I didn't tested it during a long time, so it may be broken.
Edit: yes it doesn't work.
Edit2: bug fixed.
Edit3: updated eng-db.cfg is added to OP. Some typos are fixed. Please use a text editor with spell-checking!

by DeathStar
So, I haven't been active for a rather long time on these forums. I've both had a lot of IRL stuff to deal with in the last several months, and I've only recently ordered a new GPU, which should arrive on the 31st (I was unable to start SE with my current, rather outdated one). Hence, I haven't been able to do any localization work whatsoever, but Marko S. has taken that into his own hands until I'm able to translate again, so major props to him for that