Wat on one of the news outlets a professor came on and said that the fire season has extended an average of 75 days a year post-2000 compared to pre-2000!  That's an extra two and a half months!

On a (sort of) unrelated note, what do you think of this new announcement coming out of the UK RAS about Venus?  People seem to be pretty excited about it!
Top
A-L-E-X

The smoke plume recently reached the jet stream, and is rapidly sweeping eastward. It now covers the entire northern US and southern Canada:

I would not be surprised if people in northern Europe notice it in another few days.

Conditions here meanwhile are slowly improving... for now. Two days ago was the worst day, with air quality as bad as the scale gets, and the Sun and sky looked like this (exposure and color balance to match what it looked like in person.) 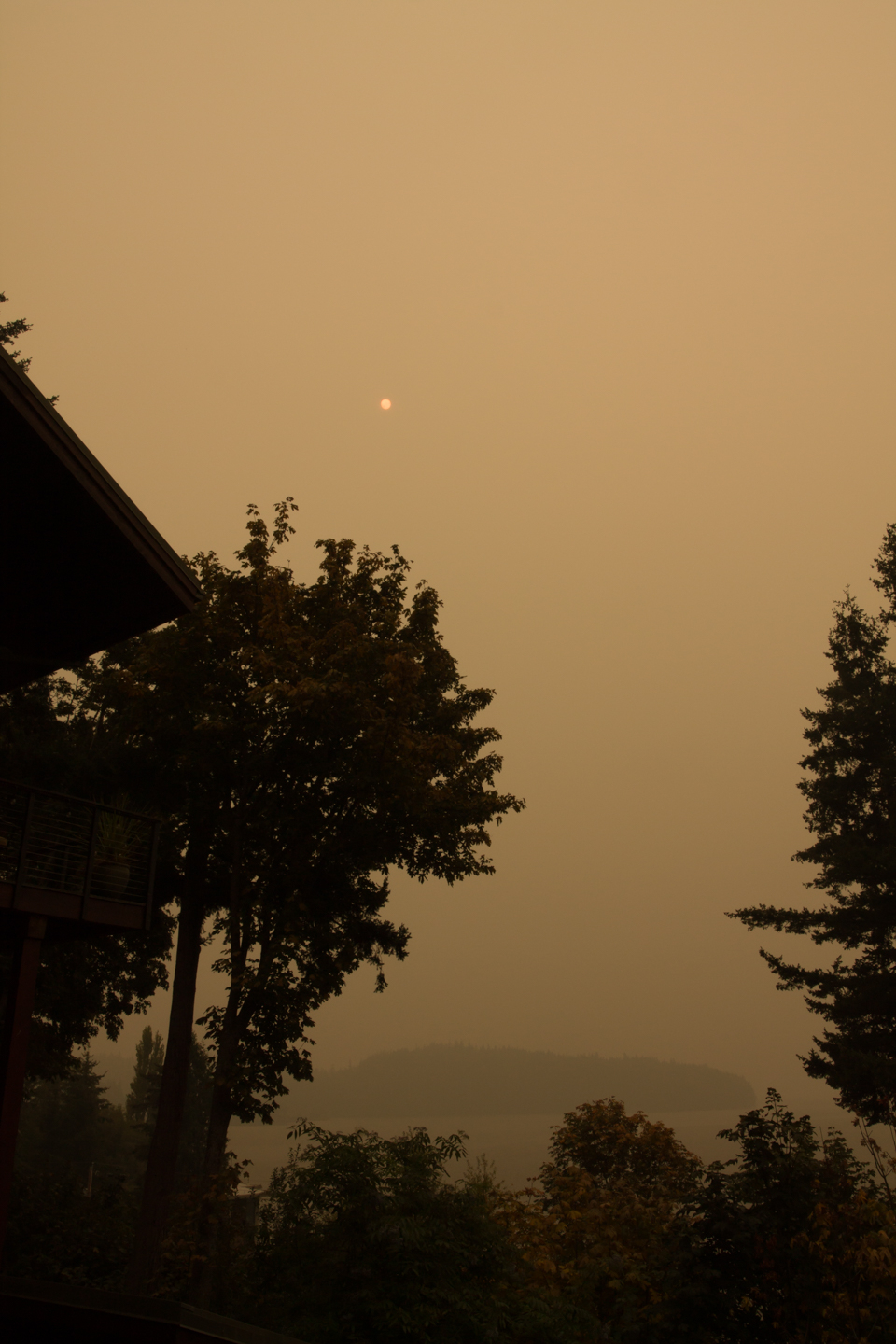 Heh it's already here in the Northeast.  The skies are supposed to "clear" and instead have the look of a very pale yellow.
Top
A-L-E-X

Excellent article on the climate impacts of these wildfires via smoke injection reaching the stratosphere!

A vast region of the western United States, extending from California, Arizona and New Mexico north to Oregon and Idaho, is in the grips of the first climate change-induced megadrought observed in the past 1,200 years, a study shows. The finding means the phenomenon is no longer a threat for millions to worry about in the future, but is already here.

The study, published in the journal Science on Thursday, compares modern soil moisture data with historical records gleaned from tree rings, and finds that when compared with all droughts seen since the year 800 across western North America, the 19-year drought that began in 2000 and continued through 2018 (this drought is still ongoing, though the study’s data is analyzed through 2018) was worse than almost all other megadroughts in this region.
The researchers, who painstakingly reconstructed soil moisture records from 1,586 tree-ring chronologies to determine drought severity, found only one megadrought that occurred in the late 1500s was more intense.

“The megadrought era seems to be reemerging, but for a different reason than the [past] megadroughts,” said Park Williams, the study’s lead author and a researcher at the Lamont-Doherty Earth Observatory at Columbia University.
Although many areas in the West had a productive wet season in 2019 and some this year, “you can’t go anywhere in the West without having suffered drought on a millennial scale,” Williams said, noting that megadroughts contain relatively wet periods interspersed between parched years.
“I think the important lesson that comes out of this is that climate change is not a future problem,” said Benjamin I. Cook, a NASA climate scientist and co-author of the study. “Climate change is a problem today. The more we look, the more we find this event was worse because of climate change.”

A trend of warming and drying
Global warming has pushed what would have been a moderate drought in southwestern North America into megadrought territory. Williams et al. used a combination of hydrological modeling and tree-ring reconstructions of summer soil moisture to show that the period from 2000 to 2018 was the driest 19-year span since the late 1500s and the second driest since 800 CE (see the Perspective by Stahle). This appears to be just the beginning of a more extreme trend toward megadrought as global warming continues.

Severe and persistent 21st-century drought in southwestern North America (SWNA) motivates comparisons to medieval megadroughts and questions about the role of anthropogenic climate change. We use hydrological modeling and new 1200-year tree-ring reconstructions of summer soil moisture to demonstrate that the 2000–2018 SWNA drought was the second driest 19-year period since 800 CE, exceeded only by a late-1500s megadrought. The megadrought-like trajectory of 2000–2018 soil moisture was driven by natural variability superimposed on drying due to anthropogenic warming. Anthropogenic trends in temperature, relative humidity, and precipitation estimated from 31 climate models account for 47% (model interquartiles of 35 to 105%) of the 2000–2018 drought severity, pushing an otherwise moderate drought onto a trajectory comparable to the worst SWNA megadroughts since 800 CE.

Abstract
Trees are the living foundations on which most terrestrial biodiversity is built. Central to the success of trees are their woody bodies, which connect their elevated photosynthetic canopies with the essential belowground activities of water and nutrient acquisition. The slow construction of these carbon-dense, woody skeletons leads to a slow generation time, leaving trees and forests highly susceptible to rapid changes in climate. Other long-lived, sessile organisms such as corals appear to be poorly equipped to survive rapid changes, which raises questions about the vulnerability of contemporary forests to future climate change. The emerging view that, similar to corals, tree species have rather inflexible damage thresholds, particularly in terms of water stress, is especially concerning. This Review examines recent progress in our understanding of how the future looks for forests growing in a hotter and drier atmosphere.
Top
A-L-E-X

Well besides the historic California forest fires, we now have the historic Colorado forest fires, the two largest in recorded history, only 8 miles apart and there's a chance they could combine into one megafire complex.  The only thing that could stop that is there is a forecast for a foot of snow on Monday but before that happens the winds are forecast to intensify, which will make the fires worse.  The bark beetle infestation plus the multiyear drought is really doing a number on those trees and the fires are spreading from tree top to tree top and nearing large towns.  There's already been deaths reported, including a couple that hid in their basement and had been married for 68 years.
Top
A-L-E-X

Föhn winds are fun.  In the last 24 hours I recorded a low of 10.0 °C, an average of 12.2 °C and a high of 14.4 °C.  That's pretty impressive in November at 349 masl in Oslo at 60°N.  Not even in October have I recorded a warmer day.  My record goes nearly 20 years back.  Around midnight last night it was as windy as it ever can get here (gusts reaching 20 m/s) and hovering around 13 °C, a pretty balmy night!
NIL DIFFICILE VOLENTI
Top
midtskogen

We have been over 20C to about 25C for the last few days with it forecast to continue for the next few also.  Low humidity, clear blue skies and light winds too.  Sounds like our warm periods seem to occur in synchronicity with yours!
Top
A-L-E-X

Had a crazy derecho like weather event here last night with 60-70 mph winds from Ohio across PA and right into the NYC including 3 tornado warnings in and near NYC area never seen that before. And a 15 ft seiche in Lake Erie!

And then there is Cat 5 Iota about to hit Central America and still strengthening.  This is 2020's version of Wilma and the last hurdle for the season to clear and it just did.
Top
A-L-E-X

I know right? Besides the pandemic, this Atlantic hurricane season is one of the most crazy things about 2020.
Top
Watsisname

We're getting our first Pacific Northwest cyclone of the season making landfall on Vancouver Island right now. This was an interesting storm to watch develop: a textbook example of an extratropical cyclone undergoing rapid ('bombing') intensification, with central pressure dropping more than 25mb in just 24 hours. It even has an eye (sort of). 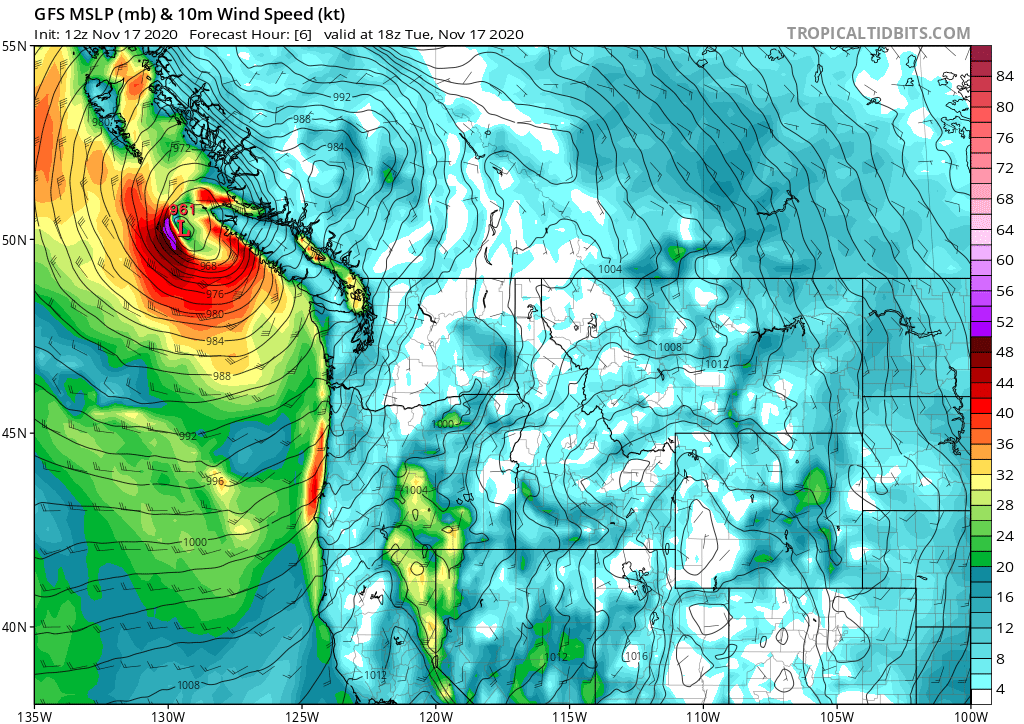 I know right? Besides the pandemic, this Atlantic hurricane season is one of the most crazy things about 2020.

there seems to be a lot of strengthening right before they hit land, which is the worst possible combo.  We have hurricane fatigue going on in addition to pandemic fatigue =\
Top
A-L-E-X

Watsisname wrote:
We're getting our first Pacific Northwest cyclone of the season making landfall on Vancouver Island right now. This was an interesting storm to watch develop: a textbook example of an extratropical cyclone undergoing rapid ('bombing') intensification, with central pressure dropping more than 25mb in just 24 hours. It even has an eye (sort of).

Hopefully this will end fire season for the year, although I heard there have been new fires springing up near Reno, Nevada.
Top
A-L-E-X

we have 3 tornado warnings here today, crazy spring-like weather with warm temps and lots of rain and instability
Top
A-L-E-X

I got caught in a rather impressive snowstorm in the mountains today, with perhaps 8-10cm accumulating per hour and frequent thunder (which sounded like it was everywhere at once, being inside of the storm cloud). I've been up there during snow many times before, but this was something to remember.

Some photos:
► Show Spoiler
At the top near the ski area. The storm is actually beneath me at this moment. 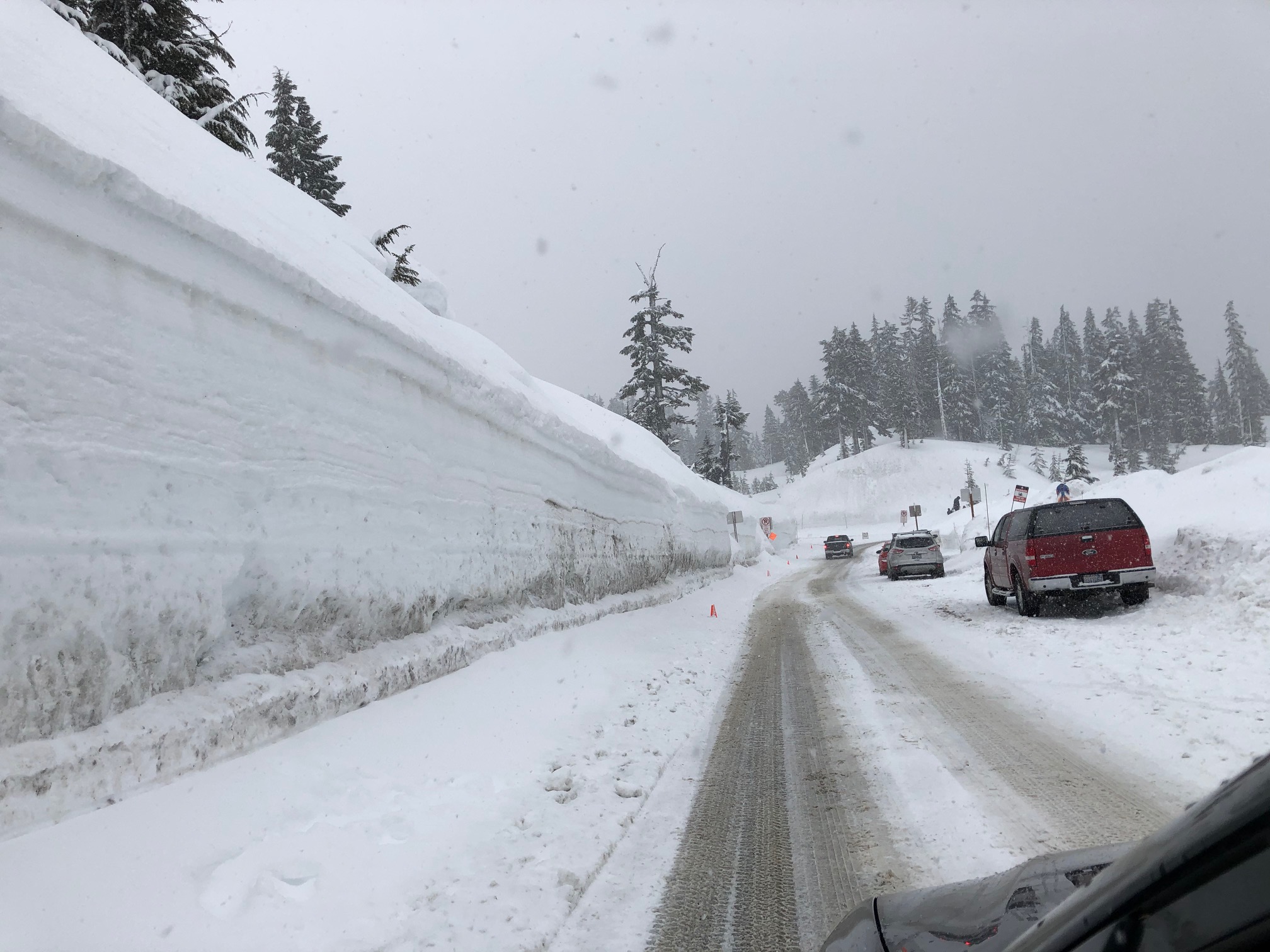 Driving down into it: 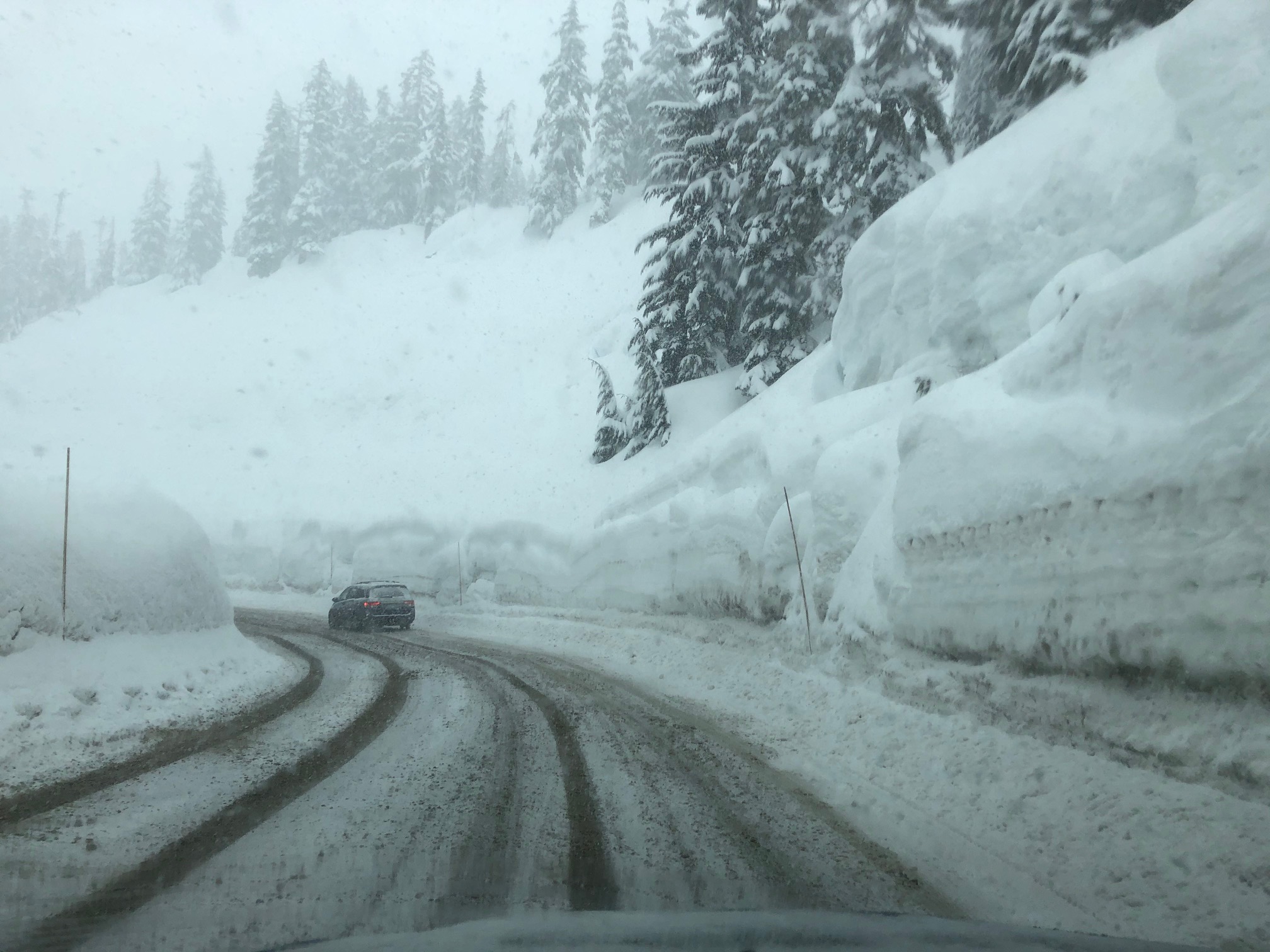 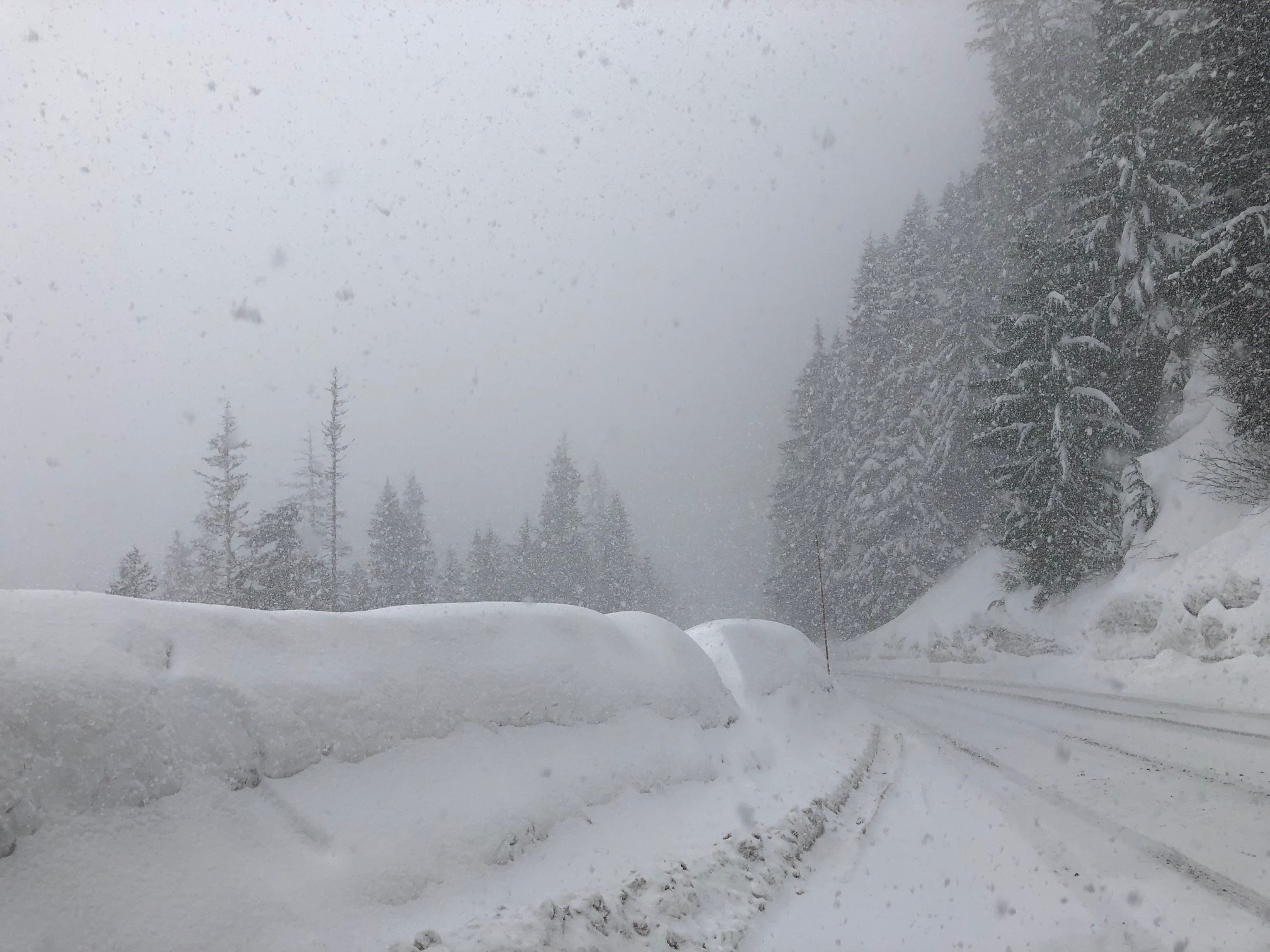 Wow that sounds dangerous, did you have to shelter in place, Wat?  4 inches per hour is something I wouldn't want to be caught outside in!
Top
A-L-E-X
Post Reply