Wat we're about to get an amazing hybrid noreaster tropical or sub tropical event ourselves that the media is not yet paying attention to.  It is supposed to be two events, one is Tuesday night into Wednesday and the other is Friday into Saturday and by the time it's finished, NYC may have 10 inches of rain and 60 mph winds!  What do you think of that?  We've already had three straight months of 10" of rain which hasn't happened before and if this happens to close out October it will be the fourth month in a row of double digit rainfall!

October has also been abnormally warm (+5 F) and as far north as Caribou, Maine hasn't even gotten their first freeze yet, blowing away the old record by more than 2 weeks!
Top
A-L-E-X

Watsisname wrote:
Source of the post Currently watching what may be the deepest low ever recorded this close to the coast in the Pacific Northwest. It is currently about 950 hPa and still intensifying rapidly, with models in good agreement for a minimum pressure of around 943 hPa.

That's just a typical North Sea winter storm.  Usually, the deepest lows occur far out at sea, but 10h Feb 2020 it was different and the storm shut down airports in Norway, not because of the wind but because instruments could not be calibrated for sea surface pressures below 948 hPa.

I had planned to install meteor cameras at a mountain top at about 1800 masl today, but blizzard conditions made it too dangerous for such outdoor activities today.  Which is not uncommon at that altitude at this time of year (and I've had to postpone a couple of times already), but tomorrow looks better.
NIL DIFFICILE VOLENTI
Top
midtskogen

Wow sounds exciting!  How much snow fell there Mid and how high were the winds?
Top
A-L-E-X

Alex, check the post I made in the asteroid/meteor thread.
NIL DIFFICILE VOLENTI
Top
midtskogen

Last month I installed meteor cameras at the summit of a mountain in southern Norway, at 1846 masl.  This is the highest mountain in a 94 km radius, making it home to some of the most extreme weather in Norway.  The mountain is particularly exposed to humid Atlantic air making atmospheric icing a real challenge here.  The picture below shows a 2.5 meter tall pole after a couple of days of "normal" weather here.  In that short time a layer of ice up to half a meter thick has accumulated on the side of the pole facing the wind.  Interestingly, we can clearly see that the wind has blown upwards here having been pushed up by the mountainside.  This also makes supersaturated fog very common here, and in combination with typically gale force winds, the humidity quickly deposits ice on everything exposed.  When I visited this place the time before in April, some structures had collected at least 2 meters of ice.

I've mounted the cameras to a similar pole, and not surprisingly the ice is a problem.  I'm planning to return soon to add more heat to keep ice away. Clearly (and not surprisingly) we also need to heat the pole.  This is what it looked like today after a week since the last de-ice.  And with more surface, the icing would just accellerate and quickly engulf the cameras.  By April this would become a 5 m³ lump of ice. Wow Mid what kind of temperatures are you experiencing there?
Top
A-L-E-X

A-L-E-X wrote:
Source of the post Wow Mid what kind of temperatures are you experiencing there?

Around -5C.  The temperature itself isn't a problem.  It's not a very cold place, monthly averages (1991-2020) vary from -9.2C in February (record low -35.1C) to 5.3C in July (record high 20.4C).  It's the combination of wind and fog.  The dominant wind from the south-west is very humid, Atlantic air and at that altitude there is no mountain anywhere near that high in that direction (well, until you hit the Andes 12,000 km away).  Wind gusts up to 51 m/s have been measured there (so we need to think well through how we mount the cameras), and some months can have average at 15 m/s and have fog most of the time.
NIL DIFFICILE VOLENTI
Top
midtskogen

We're used to a lot of rain here during this time of year, but this is something ridiculous. 10 inches or more in the mountains, in less than 48 hours. 3 to 5 inches almost everywhere else. And it's so warm that almost none of it will come down as snow, not even at the high elevations.

Obviously, that's going to cause some flooding. The Skagit River is currently forecast to exceed flood stage by 11 feet, and exceed the previous record (set in 1990) by 2 feet. Records at this site go back more than 100 years (at least to 1906). 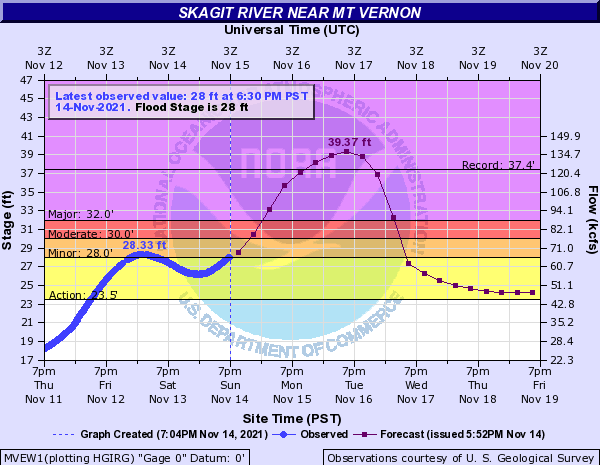 An amazing day on Saturday!  Long Island had never before seen a November tornado (period of record beginning in 1950) and on Saturday we saw 4 tornadoes on the same day on Long Island including one that touched down right in my town!  I lost power for 3 hours that afternoon, and the whole house was shaking and I heard hail pinging outside.
Top
A-L-E-X

The water is finally beginning to recede from the coastal areas today, and the scale of the disaster is setting in. A lot of damage, evacuations, and homes lost. A lot of all-time rainfall and flooding records have been broken. Something we also expect to see more of with our warming climate, which will bring this region warmer and wetter winters. This event in particular has as much to do with the warm temperatures as with the amount of precipitation itself. Normally most of this would have fallen as snow in the mountains instead of becoming runoff.

A shot I took down in Skagit Valley two days ago, as the flood water crossed highway 11. 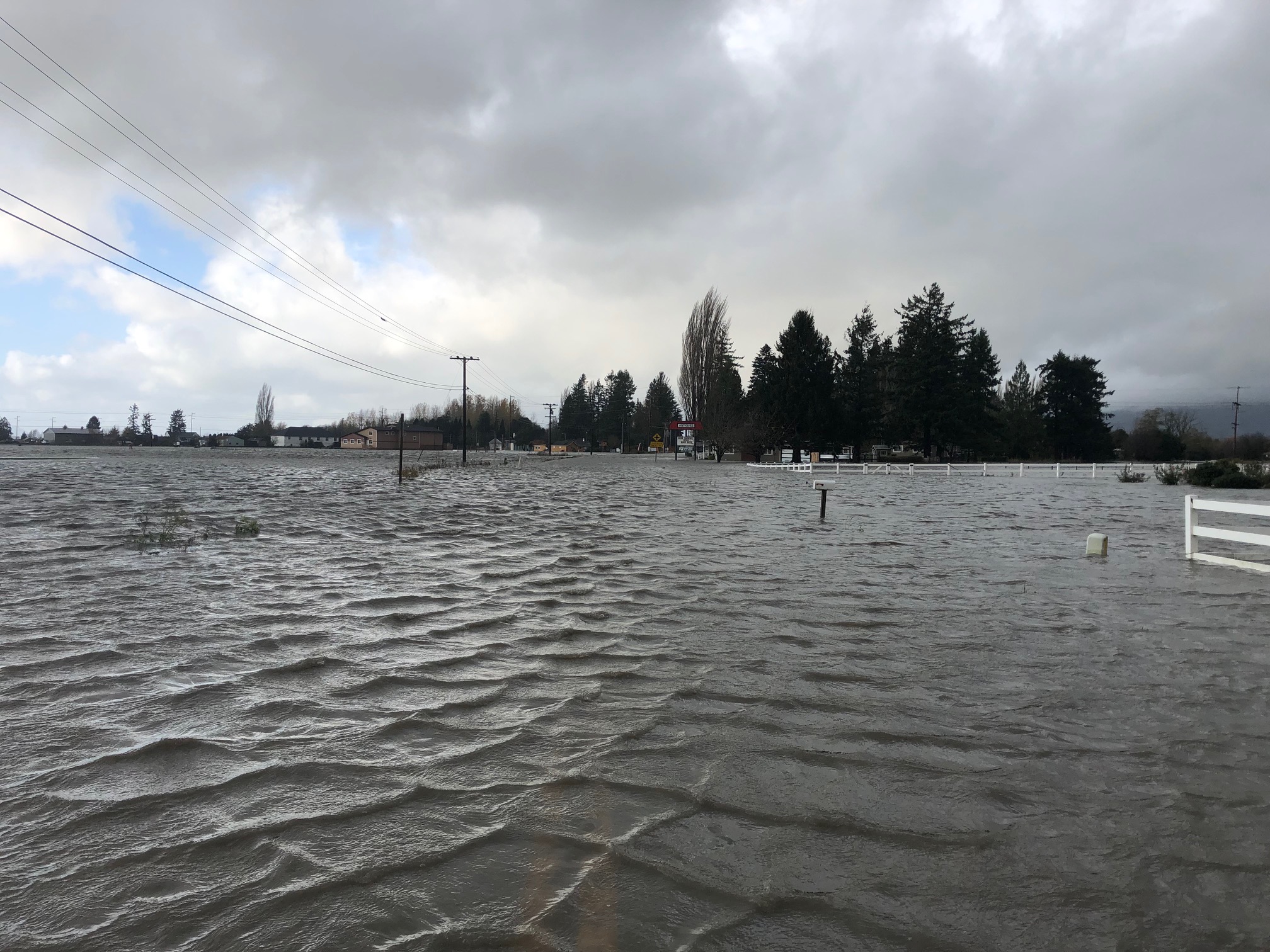 The situation is also dire up in BC. Vancouver and many surrounding communities are effectively isolated from the rest of Canada.

A-L-E-X wrote:
Source of the post An amazing day on Saturday!  Long Island had never before seen a November tornado (period of record beginning in 1950) and on Saturday we saw 4 tornadoes on the same day on Long Island including one that touched down right in my town!

That's pretty crazy! How strong were they?
Top
Watsisname

It's been updated to now 6 tornadoes on Long Island!  There had never been a recorded tornado on Long Island before and the previous record for the entire year was 3 in one day (and records go back to 1950 for these.)  One landed right in my town and the other 5 were east of me.  They actually weren't very strong five were EF0 85 mph (including mine) and the strongest one was EF1 110 mph.

Wow Wat, are those pictures from Vancouver, I heard they had horrible flooding there and the town  was cut off from the outside world.  How much rain did they have?  This is an atmospheric river event isn't it?  They have been relentless this year and one of them actually made it across the country and gave us this surprise severe weather outbreak we just had.

Over here the meteor cameras which I got installed on a mountain top last month is currently going through its first violent blizzard.  The forecast predicts wind gusts up to 38 m/s (85 mps).  It could be less, or even much worse.  Unfortunately, the cameras went offline one by one this afternoon.  The footage shows that the dome was hit by something, most likely a lump of ice.  Best case: everything was shook up and needs to get properly reconnected again.  Worst case: The dome was shattered and everything is now coated in ice.  Not much can be done until the weather wears off over the weekend.  Currently the conditions at the summit are lethal.  Any unsecured person will easily be blown away tumbling down the steep mountainside.

The camera has been mounted about 20 m from a TV tower, seen to the left in the below image. In this frame something in the upper left part can be see hitting the camera, probably a heavy lump of ice that has blown off the tower.  I considered this the biggest risk, but it must have been something pretty big and hard. A few days ago I made this timelapse: https://www.youtube.com/watch?v=ONhpCpVyHME
NIL DIFFICILE VOLENTI
Top
midtskogen

A-L-E-X wrote:
Source of the post Wow Wat, are those pictures from Vancouver

No, from here in Washington, south of Bellingham. The rain and flooding affected a very large area: the Olympic peninsula, all of northwest Washington north of Seattle, and into British Columbia and Vancouver Island. There are many towns on both sides of the border that have had significant damage The town of Sumas, WA had 75% of its homes inundated.

midtskogen wrote:
Source of the post The footage shows that the dome was hit by something, most likely a lump of ice.  Best case: everything was shook up and needs to get properly reconnected again.  Worst case: The dome was shattered and everything is now coated in ice.  Not much can be done until the weather wears off over the weekend.

Dang, here's hoping it is easily recoverable soon. Mountain summits in winter in these kinds of regions are hostile environments. Meteor cameras on the mountaintops here would be challenging too, both from ice accumulation and snowcover.
Top
Watsisname

It was finally possible to inspect the cameras after they went offline four days ago: Cr*p, the dome is gone, but admittedly what I suspected.  We need something more bulletproof.  But it's not simply picking up something like that in a hardware store.

Now everything must be allowed to dry for a couple of days.  Good thing is that everything (save the dome) still seems to be in place despite extreme winds up to 40 m/s.  I fear, though, that one camera got hit hard.
NIL DIFFICILE VOLENTI
Top
midtskogen
Post Reply