Yes exciting times, JD!  I remember we have been talking about trying to attain this (and cold fusion lol) since back in the 80s!  Do you think we will reach level 1 within our lifetimes?  Do you think that would be controllable fusion at reasonable temperatures?
Top
A-L-E-X

Jupiter's satellites are pushing Venus from its orbit and they are as huge as all nine planets together, so maybe one day they could push the Earth from its planet thus leave it without the conditions for living.
Top
John Done

John Done wrote:
Source of the post Jupiter's satellites are pushing Venus from its orbit and they are as huge as all nine planets together

Where was this news reported? Please post your references.
Top
Watsisname

Water found on the sunlit side of the moon!

What do you guys think of this?  Might be time to restart my previous discussion about what artifacts we might leave and where to leave them for them to survive weathering in case humanity goes extinct and how long it might take for humanity to evolve again from primates.

According to this, this bird went extinct 136,000 years ago and evolution caused it to re-evolve twice?
Top
A-L-E-X

Thats a wonderful point, JD!  I was wondering the same thing...humans couldn't evolve from chimps or bonobos!  And you dont see those creatures evolving to becoming hominids- because they are already well-suited to the environment they live in!

Well, given millions of years, something might to technological levels again, but it likely wouldn't be human?
Top
A-L-E-X

Cornell astronomer Lisa Kaltenegger and Lehigh University’s Joshua Pepper have identified 1,004 main-sequence stars – similar to our sun – that might contain Earth-like planets in their own habitable zones within about 300 light-years of here, which should be able to detect Earth’s chemical traces of life
Top
A-L-E-X

I've posted about the Swedish bolide in the "show off" forum.  Here are two videos that are not mine in any way. They are simply too amazing not to be shared.  Listen carefully, the first sonic boom arrives less than 30 seconds after the flash (the exact timing is still a bit uncertain, as I've discovered that the audio and video are slightly out of sync, but I've verified with the owner that the camera delivers video in correct speed and the audio eventually lags behind, so the delay is certainly less than 30 seconds).  We must take into account that what we hear is not the flash, which happens mainly between 30 and 10 km altitude, but the transition to subsonic speed, which happens several seconds later.  One possible solution (not the only one, but the one best fitting other data) is that it happened 7 km away at 3 km altitude.  According to the camera owner the first boom was really loud, and felt like a punch in the chest.

What is heard immediately after the first sonic boom is also interesting, which has been confirmed by witnesses.  There's a whizzing sound, like an incoming bomb or rocket, rapidly decreasing its frequency.  This has been reported by many people who have witnessed other large fireballs, but I'm not aware of any actual recordings of it.  Here it is, though the audio quality is not the best.  I can't think of any other explanation than it's the sound of the meteor body itself, a combination of deceleration and doppler, but this is something we need to discuss with several experts.

midtskogen wrote:
Source of the post What is heard immediately after the first sonic boom is also interesting, which has been confirmed by witnesses.  There's a whizzing sound, like an incoming bomb or rocket, rapidly decreasing its frequency.  This has been reported by many people who have witnessed other large fireballs, but I'm not aware of any actual recordings of it.  Here it is, though the audio quality is not the best.  I can't think of any other explanation than it's the sound of the meteor body itself, a combination of deceleration and doppler, but this is something we need to discuss with several experts.

This is seriously cool. I've also never heard of such a thing being recorded before.

In thinking of whether other atmospheric effects might be at play, I began wondering how much might be related to the dispersion of sound in air. Usually we treat the speed of sound is the same for all frequencies, but that is based on some simplifying assumptions. In reality, the speed of sound does vary with frequency very slightly, with higher frequencies travelling a little faster (also with some complicated dependence on humidity). Looking at the data, though, it appears the deviation in the speed of sound with frequency in the audible range is about one part in a million one part in ten thousand, which over a distance of 7km would cause the frequencies to be smeared out by a few milliseconds.

So, dispersion should be quite negligible, and that supports that the majority of the effect probably really is due to the meteor itself.
Top
Watsisname

There is a similar sound heard in the Mythbuster cement truck explosion, which I'm not sure how to explain.  The guy referred explicitly to the sound of that explosion saying that it was exactly like that.  The pitch drop in the Mythbuster explosion sounds faster, but in the Swedish videos I suspect that we miss the very first bit as the audio is saturated, so we only hear the slower, continued pitch drop, not so much the more powerful "Mythbuster" sound.

I've always imagined the pitch changes of whizzing bullets as doppler effects, but perhaps there are other factors as well.  For bullets it could certainly be a change in rotation speed, but a spinning rock of this size surely doesn't have a spin frequency matching the sound frequency.  Still, perhaps high sound frequencies can be produced by lower rotation periods due to funny air displacements around the rock.

I listened to a number of Chelyabinsk videos trying to find the same sound, but nothing like it.  Chelyabinsk came in quite shallow, though, and didn't enter the troposhere in such insane speed as in Sweden (probably well over 10 km/s at 15 km altitude!).  The pressure from that point and below must have been enormous.  It will be interesting to see what kind of rock could survive that.  But iron is unlikely.  10 tonnes of iron at 70 degree angle would just punch through the atmosphere and hit the ground supersonic.

midtskogen wrote:
Source of the post There is a similar sound heard in the Mythbuster cement truck explosion, which I'm not sure how to explain.

Hahaaa, that episode was so great. I'd completely forgotten the sound. Very weird. For fun, I plotted its spectrogram: 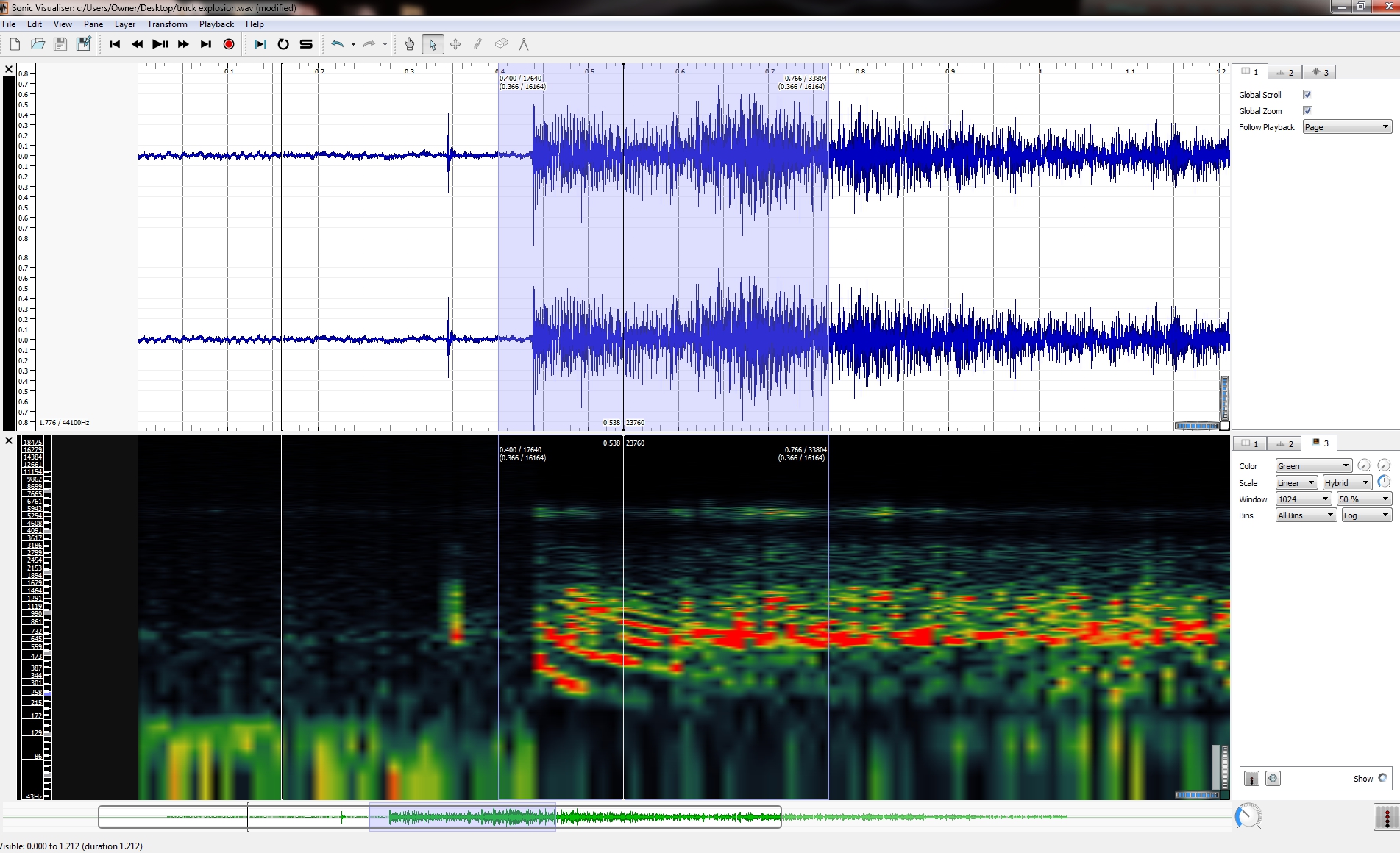 The downshift in frequencies is quite visible, with each peak being roughly halved in frequency over a span of about 100ms. Again too slow to be explained by dispersion, and I can only guess it must be due to the rapid deceleration of shrapnel flying through the air. But I really don't know.
Top
Watsisname

Watsisname wrote:
Source of the post I plotted its spectrogram

Nicely visualised.  Same thing visible in the spectrogram of the meteor sound.

The object is decelerating.  Before the sonic transition it leaves a trail of ripples moving slower than the object, so the object is outside the ripples.  As it approaches the sonic transition point, the lower part of these ripples become closer and closer, then they pile up at the transition point and as the object decelerates further inside the ripples they become more and more spaced again.  The packed ripples will reach the witness first, whether they were emitted before or after the transition.  I think that holds regardless of the relative position of the witness, but perhaps how rapid the pitch falls can hint the angle between the meteor and witness, if we know the deceleration rate.

This could probably be effectively visualised in an animation, but that takes a bit of work.

As for the Mythbuster video, maybe there is some initial supersonic expansion, which quickly goes sonic, and what we hear is that expansion approaching sonic speed, reversed.
NIL DIFFICILE VOLENTI
Top
midtskogen
Post Reply