Interesting discussion about Venus and Mars switching orbits. I was thinking of something very similar but slightly different: What if Venus was on an outer orbit, not that of Mars (because Mars's orbit is a bit eccentric), almost perfectly circular as it is now, and its orbit radius difference with earth was the same as it is today. I.e. ~50 million Km but on the outside of earth's orbit. Would it have slightly more chances of being habitable?

On an unrelated note what do you people think of this:

Since it's coming from Harvard, I'd say it's pretty legit.  Basically they're using diamond anvil cells to achieve pressures on the order of megabars (millions of atmospheres), which is where the transition to liquid metallic hydrogen is expected to occur.  They have not yet demonstrated the transition, but they are pushing the technology very close, and it looks promising.

An interesting thing about the diamond anvil cells is that since the diamonds are transparent, you can see what's happening to the sample under those conditions.  I actually didn't know that was possible before reading about this.  It's really cool.

That means if they do successfully produce liquid metallic hydrogen, they can subject it to a lot of tests and observe its properties.

As for the chances of Venus being more habitable if it had formed the same distance outside of Earth's orbit (i.e. at 1.28AU instead of 0.72AU), then almost certainly the odds of being habitable would be improved.

If Venus were at 1.28AU with the exact same atmosphere that it has now, then the ratio of new temperature to old temperature would be [math]\sqrt{\frac{0.72AU}{1.28AU}} = 0.75.  In other words, it would be 25% cooler.  That's still much too hot to be habitable.  But the evolution of Venus would have played out differently if it started there, and probably would not have the same greenhouse atmosphere that it does.  We might even suppose that it would not have lost its water, and therefore maintain tectonics and a rock weathering cycle such that its climate would be more stable.
Top
Watsisname

What would happen if a binary black hole with distance between them (AU type distance) had an accretion disk? As far as I know, It wouldn't or it would be more of a glowing debris cloud instead of a disk. If not either of them, Why?

Just wanted to see if I was right or not, And if not why. Got a larger backlog of questions and ideas I wanted to put forth, But just testing the waters first

The question is very interesting, and finding the solution requires use of some sophisticated models -- using both general relativity and magnetohydrodynamics (GRMHD simulations).  It turns out that there is a lot of study on this subject, as it is relevant to observations of active galactic nuclei following galactic mergers (the supermassive black holes in each galaxy quickly "sink" to the center and merge together), and for gravitational wave astronomy with black hole mergers (what is the effect of the accretion on the gravitational wave signal?).

So I did a quick literature review and turned up a few papers, graphics, and video that you may like to look at.  Some notable results are:

-There is still an accretion disk, not a debris cloud.
-At large separations, the disk is still actively accreting due to gravitational tidal torque, producing high accretion rates and a magnetorotational instability (MRI).  (The effect of MRI on an accretion disk can be seen here.  MRI kicks in about one minute into the video.)
-At smaller separations, the magnetic fields in the accretion disk become important and produce surprising effects.  Large swaths of the disk are cleared out behind each black hole, and material is ejected in polar outflows.  The merger proceeds rapidly from this stage.

Evolution of an Accretion Disc in Binary Black Hole Systems 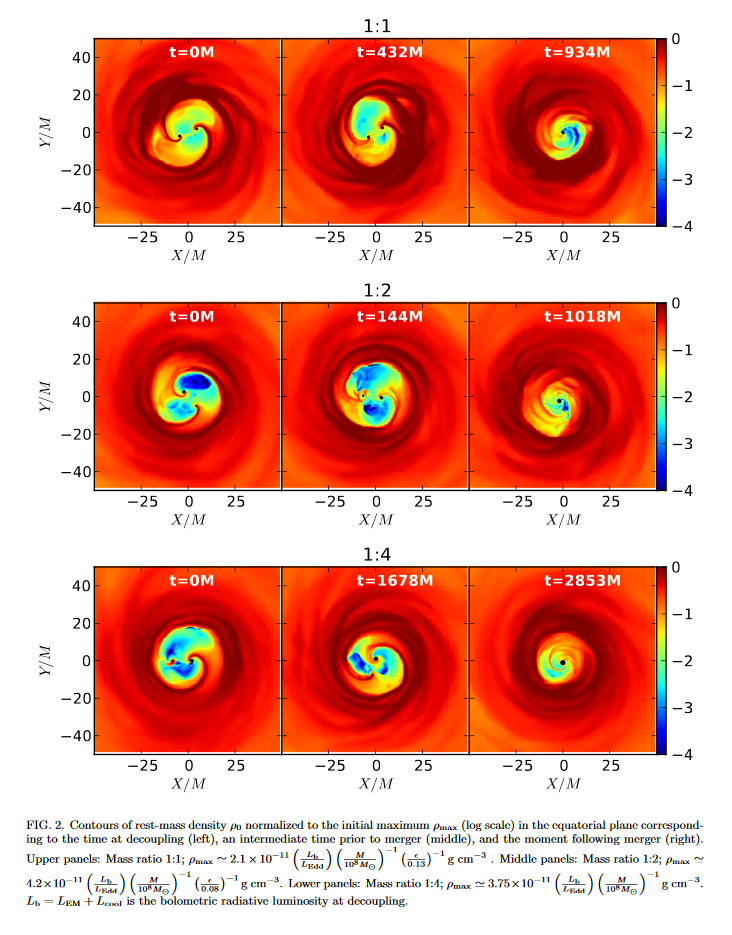 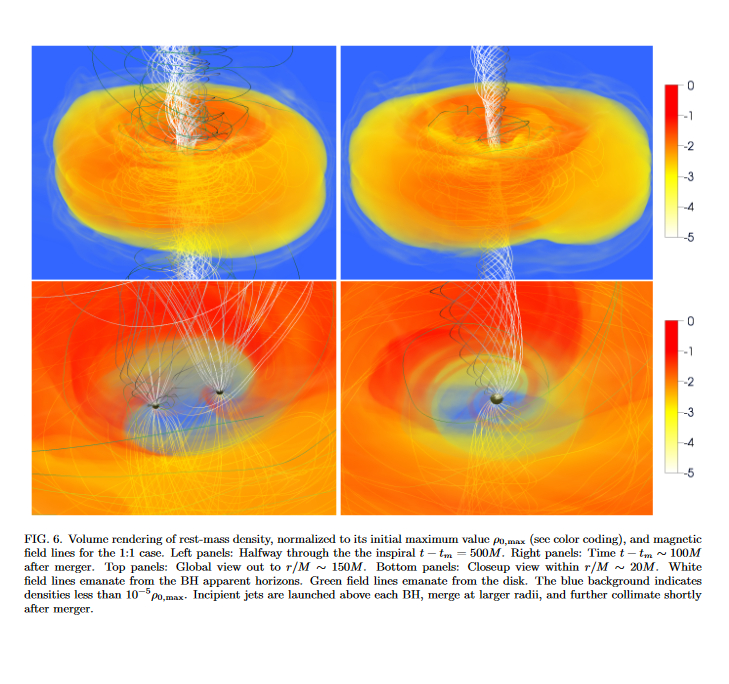 N0B0DY wrote:
I am slightly skeptic.

There might be a few if's involved in this experiment, like if they actually achieved the claimed pressure, if they didn't see something happening to the diamonds instead, and so on, but who knows.  There is a race to do this first, which means getting things published gets more important than getting things verified. They have to be very careful when bold claims are made.  It can be done the wrong way (arsenic life), or the right way (faster-than-light neutrinos).
Credit should go to the team who first produces metallic hydrogen samples that independent researchers can examine the properties of.
NIL DIFFICILE VOLENTI
Top
midtskogen

Wow, Alot more than I was expecting, Thats awesome.

It'll take me a while to ingest that, I am only an aspiring astrophysicist and on top of that I had to drop out of school becuase of a medical issue, So I am behind the curve somewhat. Alot of what I know is self taught/logic.

Here are Mars and Venus switched. Quontex wrote:
Source of the post Why would it take longer for larger mass objects? Is it becuase the higher the mass the more they dance around each other?

The idea is that they spiral together by emitting gravitational waves (this carries away their orbital energy).  The rate at which this energy is lost depends both on the mass and distance (it's proportional to the fifth power of the ratio of the mass to distance), and that makes their orbit shrink at a rate proportional to the cube of the ratio of mass to distance.  So heavier masses will spiral together sooner, if they started the same physical distance away.

But here we're looking at black holes that are the same number of radii away.  To illustrate with an example, two 1-solar-mass black holes separated by 10 radii are about 30km apart.  Two 1-million-solar-mass black holes separated by 10 radii are about 30 million kilometers apart.  In both cases, the rate at which they spiral together is the same (the ratio of mass to distance is the same), and the total time it takes to merge is a million times longer for the million solar mass holes (because they had to cover a million times greater distance).

Also, don't feel like you're behind any curve!  People enter the field at all ages, and many who start young drop away and try again later. I was no exception.  I knew I wanted to study physics and astronomy from a very young age, but I had a lot of issues with anxiety when I started college, and ended up taking a few years away to get myself together before getting back into it.  Hopefully you can get back into it too.  Very exciting stuff going on nowadays!

Havn't read it yet, Been rather busy atm

Any as I said before, Thanks.

One more quick question. Going into the field (Still maybe a year or 2 off uni) Should I retain what I have learned so far or clear it from my mind? I am afraid of my brain trying to fit what I learn into my already drawn conclusions.

Alot of what I know is from self teaching and assumsions based on that information. For instance I had an idea a while back that space-time is existance (The 'thing' that contains the multiverse) and was 1 dimensional. (I may go into depth if you are interested). I currently think however it is better to go in with an empty mind and re-hash as it were.
Specs: i5 6600K - No OC / GTX 960 FTW - @ 1380mhz OC / 16GB of RAM / 256GB SSD / 2TB HDD
Top
Quontex

I don't think there's any harm in either approach.  Certainly you won't want to be too married to your initial ideas, but I don't know if it's really possible to be "blank slate" either.  You'll pick up a lot of new knowledge, and some ideas that you brought with you will be good and useful while some others might be discarded or updated.  Your brain will figure it out for you as you go.

I think what's most important is not so much the conclusions themselves, but the strategies you develop for how to arrive at those conclusions, and how to know if you can be confident in them or not.  The astrophysicist's toolkit is not so much a bunch of formulas and theories, as a whole framework of knowledge on how to design and carry out an experiment, create models, apply mathematics, and perform data and error analysis.  The goal is for you to be able to say "Here's an interesting thing I'm looking at", build a model to describe it, and then be able to show if that model really does describe what you see in nature, and how well does it work.  It's a challenging -- and rewarding -- pursuit.

It sounds like you're interested in black holes and space-time, and if so that's going to be a really fun area to get into and there's a lot that we can talk about.  It's a big part of what interests me, too.

What if Mars had a large moon like Earth does? And venus too?
Top
Cantra

Well if we assume relative distances for thier respective gravities.

Mars and The Moon would be more of a binary system then a typical parent/moon system. Think of pluto/charon for an analogy.

Venus I am not entirely sure about, I think the systems barycenter would be off center causing a slight wobble, Best analogy would be the Sun/Jupiter gravitational interactions.

It all depends on distance, Are we talking just out side the roche limit or hundreds of thousands of kilometres? I also can't comment on the possible tidal issues or the effects on the climates, I will leave that to somone else.
Specs: i5 6600K - No OC / GTX 960 FTW - @ 1380mhz OC / 16GB of RAM / 256GB SSD / 2TB HDD
Top
Quontex

Well for Mars I am asking like 0.3x moon distance since mars has so little influence, taking Phobos and Deimos out of the picture since they wouldn't have existed, Not saying exactly the moon. I am asking what would happen if Mars would have formed with a Moon sized object, not really bound to exactly moon mass.

For Venus I am asking if it formed with the same with the moon about 0.5x from venus. (Half as far from Venus as the moon is from Earth)
Top
Cantra

what would happen if phobos was gently placed on the earth's surface with 0 velocity relative to the surface. what would it do at say:

the summit of mount everest

ontop of the marianas trench

plugging up meteor crater in new mexico?
Maybe it’s a little early. Maybe the time is not quite yet. But those other worlds — promising untold opportunities — beckon. Silently, they orbit the Sun, waiting -Carl Segan
Top
John Boone
Post Reply