TRAPPIST 1 - a system of an ultra-small red dwarf (just 0.08 Solar masses) with a 7 Earth-sized exoplanets, 3 of which are in the habitable zone, has been discovered recently. (Well, first planets in this system was discovered in 2015, but today was presented 4 new planets). 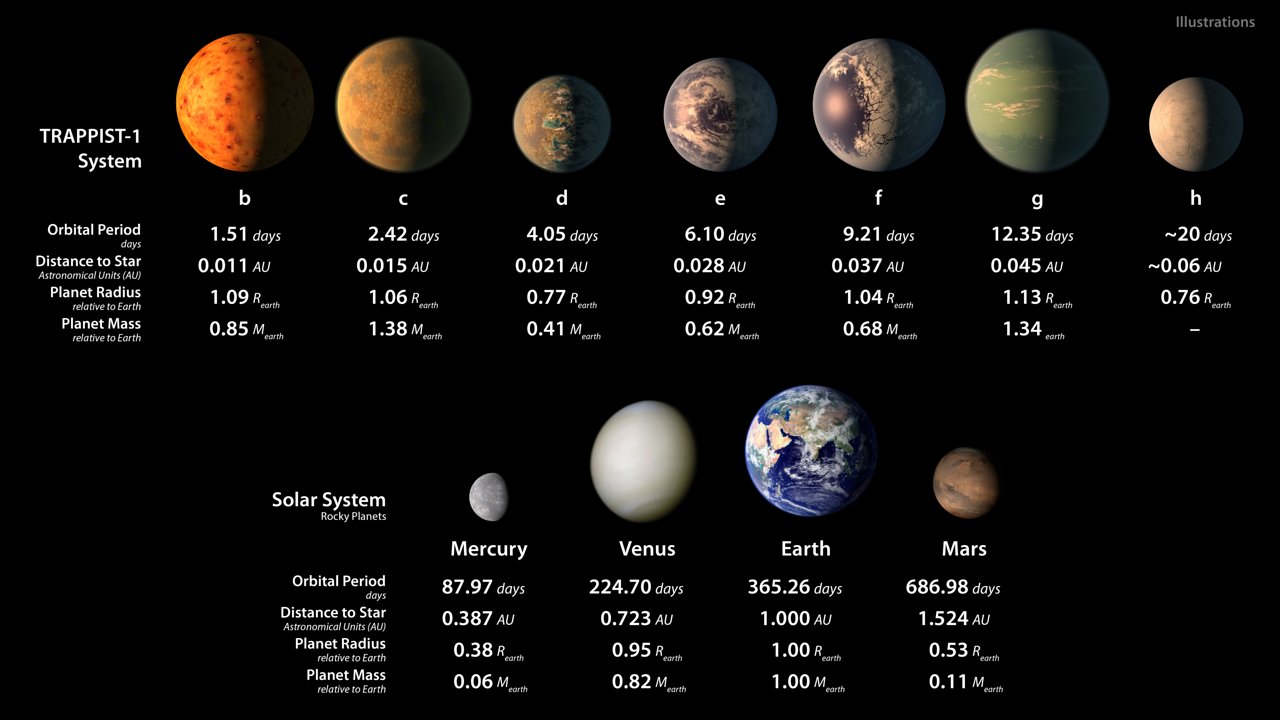 Official press-release: https://www.eso.org/public/usa/news/eso1706/
You may recognize the software used to make some graphics and animations for it:)

To add this system to SE, download this file and put it into addons/ folder. Surface classes are given to planets based on their bulk density: b, f - oceania, d, e - terra, c, g, h - desert according to the new article, masses of outer planets are much less, so they all must be composed of water and/or ice: b, с - desert, d - terra, e, f - oceania (partially frozen), g, h - ice world.
Star luminosity is increased 2 times to make temperatures on planets more high (because in SE temperature calculation on planets of cool stars is somewhat inaccurate).

The system map in the new planets Chart (coming in the 0.981). Maybe I should force 'correct' planet orientation in relation to the sun? Tidally locked planets looks weird without it. 4k view from the planet b on a planets c, d, h and e. Planets there does not needs moons, neighbouring planets sometimes became as large in the sky as the Moon in Earth's sky (planet с on this image is 1.2°, or 2.5 times larger than the full Moon). 4k view from the planet e on a parent star and planets b, c, d and f. Well, you should force the planets to be tidally locked in the correct orientation. In my version, they show up as iceworlds only, so you should maybe brighten the star, and also you should base the orbits off the equator and not the ecliptic because the rotation of the star and the orbits of the planets doesn't line up. Was about to add this data to SE myself, always nice when someone else does it.  I don't have high hopes for any of these planets but they are an interesting find nonetheless

DoctorOfSpace, agreed, we will most definitely not find life on any of these planets, but we could learn a lot from them such as how red dwarfs affect the surfaces of planets in low orbit, especially since it's only 37ly away. Probably one of the first few targets for the JWST.
"Space is big. Really big. You just won't believe how vastly, hugely, mind-bogglingly big it is. I mean, you may think it's a long way down the road to the chemist, but that's just peanuts to space." - Douglas Adams
Top
Hornblower

SpaceEngineer wrote:
Source of the post You may recognize the software used to make some graphics and animations for it

I can feel your satisfaction pouring out from the net. Way to go, Vladimir

SpaceEngineer wrote:
You may recognize the software used to make some graphics and animations for it

Oh dear didn't noticed that the first time I saw it. Nice to see its being used for what it was meant to.
Did they gave credit?
Last edited by tRetro-Visor on 22 Feb 2017 20:31, edited 1 time in total.
"Somewhere, something incredible is waiting to be known."
Top
tRetro-Visor

tRetro-Visor wrote:
Source of the post Did they give credit?

They show up a bit different on my end

Ok I fixed the addon by adding a star script (update is in OP). I also added a planet classes based on their bulk density, and made planets d, e, and f 'terras'. Now the system looks more interesting.

I also added a code which automatically assigns a realistic planet class to a terrestrial planets based on their bulk density (if the class is not specified and the mass and radius are known). So in 0.981 many catalog exoplanets will change their class to more realistic one.
Top
SpaceEngineer

SpaceEngineer wrote:
Ok I fixed the addon by adding a star script (update is in OP). I also added a planet classes based on their bulk density, and made planets d, e, and f 'terras'. Now the system looks more interesting.

I also added a code which automatically assigns a realistic planet class to a terrestrial planets based on their bulk density (if the class is not specified and the mass and radius are known). So in 0.981 many catalog exoplanets will change their class to more realistic one.

Looks alot better, but the planets don't orbit in the way the star is rotating. It is tilted at a weird angle. C and D have absurdly thin atmospheres and E shouldn't even be a terra because its too cold, the issue for C and D is probably on my end, the way I have the game modded probably effects the generation. Hey, I made a .pak file with the whole TRAPPIST-1 system, including updating the star, based on data from the document "Seven temperate terrestrial planets around the nearby ultracool dwarf star TRAPPIST-1".

Thanks for adding the planetary data SpaceEngineer, you made it much easier and quicker for me.

Although the file couldn't make TRAPPIST-1 d orbit with the correct period (~97 hours), by using just the Period tag with the transformation in years, I made it orbit correctly. I do not know if the error happened to others. Also, planet h has no mass determined (yet), so I erased that, and it calculated itself a mass appropriated for an ice world.

By adjusting the star's luminosity, I got this interesting system! Planet d actually is temperate, and all others are either too hot or too cold. Of course, because the atmosphere's code isn't very precise, the greenhouse effects are a bit weird, so more likely e and f would be much warmer. Also, f has a really low density (3.3 g/cm^3), which can suggest that either it has a huge atmosphere, or it's an ice world.

Bonus fact: the star has an apparent diameter of over 2 degrees on d! Over four times that of the Moon! I took a few photos of some transits, at a FOV of 20 degrees. Enjoy! Some images of my own version of TRAPPIST-1.
But the pictures are from SE 0.971 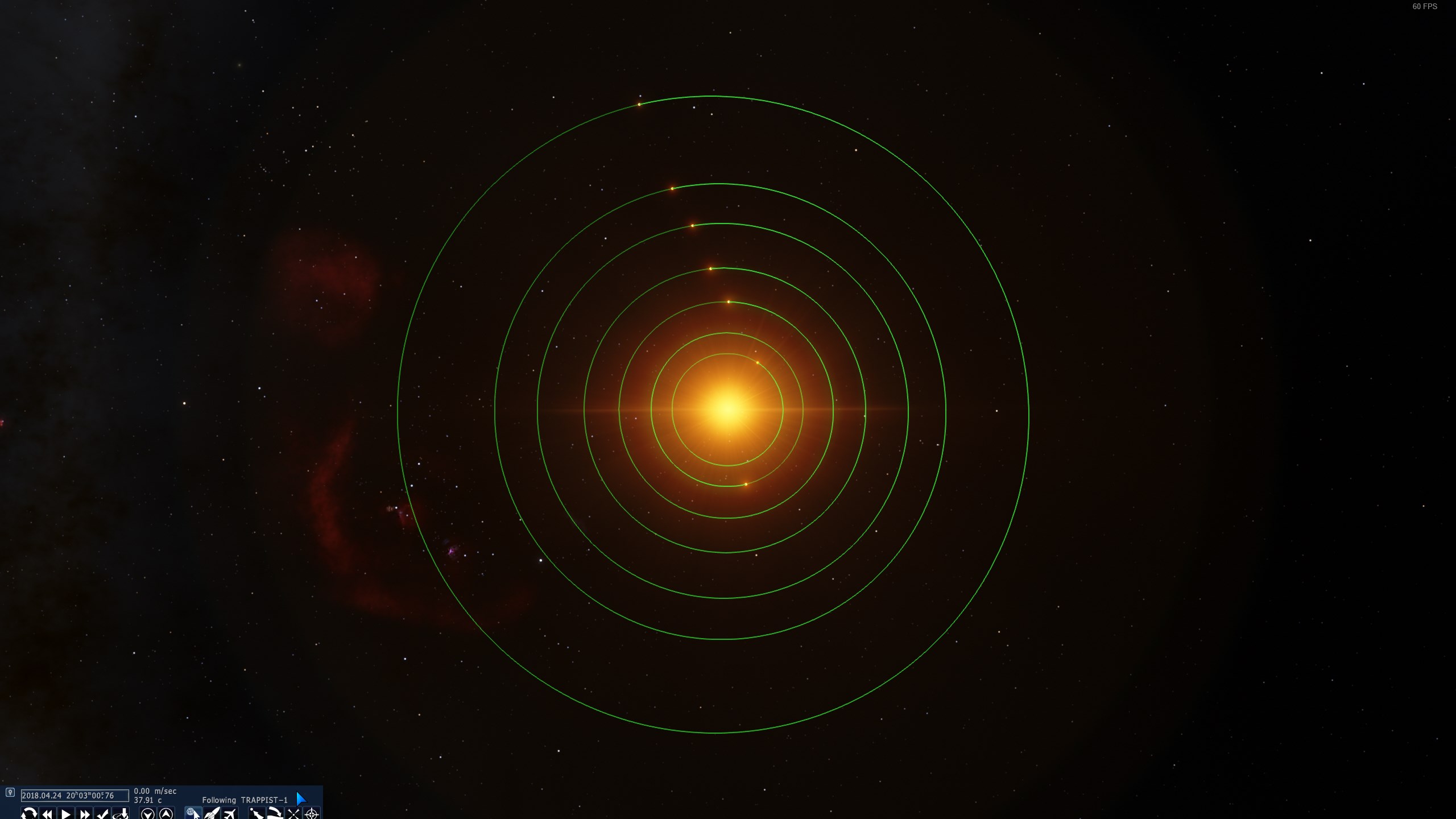 thank you Vladimir, for all the help. Funny story, using spaceengine we even corrected some of NASA's early press release images, since we noticed that Orion on their images looked different to ours (ESO), from Trappist-1 point of view. I checked trappist-1 position on the catalogue files of SE and it all looked correct, so we prompted them, and upon checking they had their coordinates for Trappist-1 wrong (they were using Uniview), and then corrected it!

So yes, thanks once again!
Top
muitosabao
Post Reply