I think that intel is trolling its customers. And here is why:
I decided to build a new system around Q3 2017. I had a six core 12 thread CPU (core-i7 970) back from early 2010/2011 which was still performing good 7 years later but I wanted to build a system that would be future proof in terms of performance and also windows 10 optimized and certified. The board that was housing the i7-970 was only up to windows 8 compatible and windows 7 certified. Also, in terms of performance, it was PCIexpress 2.0, USB2, SATA2 performance so it couldn't take full advantage of modern GPUs and peripherals. Windows 7 is nearing its end of support by 2020 so I thought that it would be a good time to upgrade to a windows 10 platform to give me another ~ 10 years of support for the OS and hardware. Naturally a six core / 12 thread CPU would be enough but I was impatient to wait for the 8700 that was released just a few weeks later and also I wanted to build something that would offer more than enough in terms of performance and raw power. While at the same time not exceeding a ~1000€ limit for the CPU, Motherboard and RAM. Well, with the CPU cooler that I had to purchase for this 7820x beast, I exceeded this limit

..
But anyway that is not the point. To understand what I am trying to say lets take a look at the 8-core 16-thread desktop segment of intel core family of CPUs. And please focus on the following 3 models: i7-7820x, i7-9800x and i9-9900K. The 1st two belong to the Skylake-X family of the X-series of processors. The last one is a "9th generation" Coffee-Lake series. Now the i7-9800X and the i9-9900K were released in Q4-2018 whereas the 1st one is the oldest of the three, released back in Q2-2017. And now lets compare their relative performance:
i7-7820X Vs i9-9900K , i7-9800X Vs i9-9900K and finally i7-7820x Vs i7-9800X.
What do you make out of this? All I can say is that the X-series owners get virtually zero performance gain across their platforms over a one and a half year difference. The 9800X is just a joke and a spit in the face of the x299 platform owners. This processor should have been faster than at least as fast as the 9900K. But it is vice versa. It has practically the same performance with its older brother and it costs almost 50% more. Also it produces more heat as it requires 25Wattage more power.

Intel manipulated naive buyers into thinking it was better then it's predecessors. It exists because of marketability and therefore KA-CHING!
Futurum Fusionem
Top
Stellarator

Stellarator, there are more ugly cases out there. Don't open the spoiler if you value your sanity.
► Show Spoiler
Lian-Li PC-888 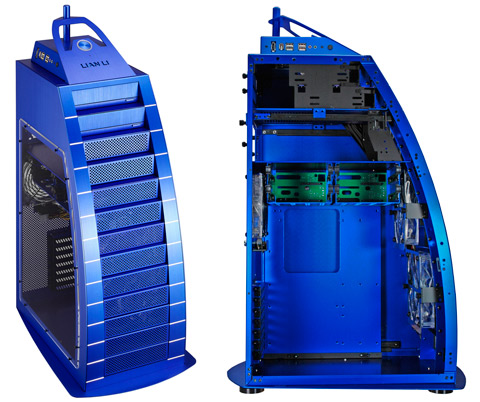 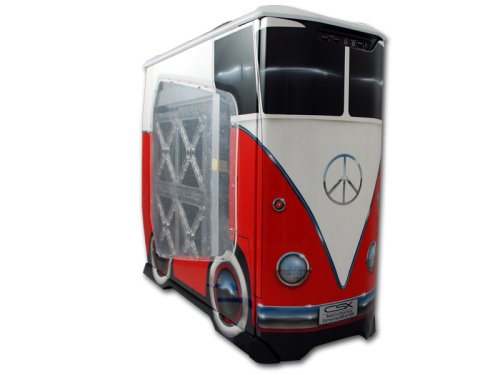 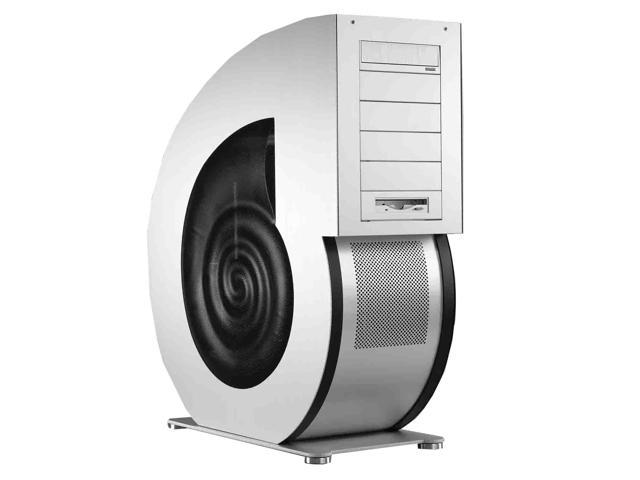 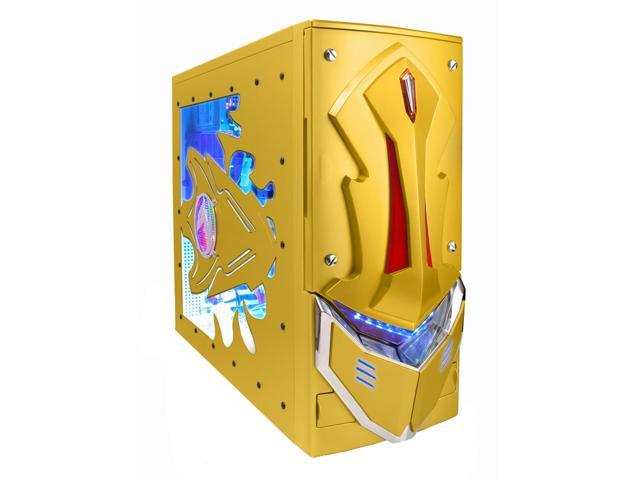 No idea what this one is called 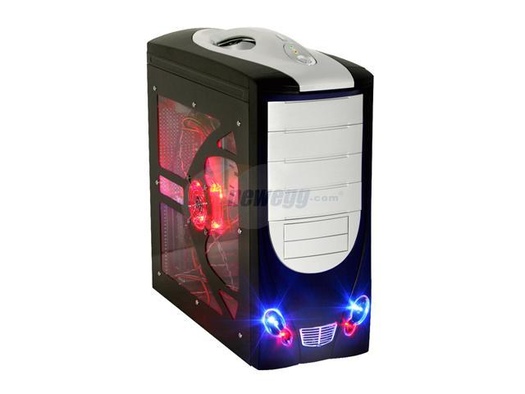 I might get banned after posting these pieces of PC hersey on the forum.
I knew I was an idiot in the past, I have toned down since then.
Top
Harge

Intel manipulated naive buyers into thinking it was better then it's predecessors. It exists because of marketability and therefore KA-CHING!

Harge wrote:
Source of the post Stellarator, there are more ugly cases out there. Don't open the spoiler if you value your sanity.

Competition is a double-edged sword. Read Ayn Rand and her gospel of Darwinian business to understand that. *shudders*.
Futurum Fusionem
Top
Stellarator

aahhh being a progressive libertarian I think diametrically opposite of Ayn Rand.  I keep a spread sheet of climate data from some of the hottest and coldest and snowiest and driest places on the planet that I download from data acquired from wunderground.  Since being bought by corporate giant IBM, this has become much more difficult, not only because of their new draconian subscription based on model, but also because they made the data very difficult to access even with a subscription.  I had to write my own program to access the data (shhh, dont tell them lol.)  One of the many reasons why I intensely dislike corporate buyouts and supermergers lol.

Does this mean that we will be able to use 16c/32t cpus in our motherboards without any issues?

If accurate, these specifications suggest that the Zen 2 architecture improves upon Zen and Zen+ designs dramatically. It appears to have made it possible to pack more cores into the same physical form factor, as well as leading to a big increase in clock speed without any change in TDP requirements.

The cores on offer with these chips are far greater than those in Ryzen 2000 CPUs — or even Intel’s latest ninth-generation chips. Clock speeds are comparable to that of Intel’s best chips and yet those frequencies are only possible on Intel’s CPUs on a couple of cores at a time without heavy overclocking. AMD’s turbo frequencies are typically applied to all cores, so the Ryzen 3000 series could be the first to offer an all-core 5GHz+ frequency out of the box.

Whether AMD can beat Intel in limited-thread tasks like most games, remains to be seen. Typically AMD’s Ryzen chips have a significant advantage in multithreaded tasks, and prove weaker clock for clock. However, other rumors suggest AMD may have made big improvements to the instructions per clock (IPC) of Ryzen 3000 CPUs. As much as 13 percent by some counts. Such a gain would be uncharacteristic of even a revolutionary architecture, but a few percentage point gains in IPC would almost completely close the gap between the two chip firms. When combined with increases in core counts and clock speeds, that could make AMD’s new Ryzen CPUs the most powerful consumer chips in the world.

One thing we do know for sure about the Ryzen 3000 series, is that like Zen and Zen+ platforms, the Zen 2 chips will utilize the AM4 socket. That means that the Ryzen 3000 CPUs will work in existing AM4 motherboards with a BIOS update and future motherboards built with the new-gen chips in mind should support first and second-generation Ryzen CPUs in turn.

AMD has pledged to continue to use the AM4 socket through 2020 when Ryzen 4000 CPUs (based on the Zen2+ architecture) are expected to be released. That means that not only will those looking to upgrade to the Ryzen 3000 series from existing Ryzen platforms not have to upgrade their motherboard at the same time, but they won’t have to do so for the Zen 2+ chips either. That could make it a much more cost-effective upgrade and the backward compatibility opens up many more options for potential buyers.

[color=#d1d1d1][size=100][font=Lucida Grande, Lucida Sans, Lucida Sans Unicode, sans-serif]According to this our new motherboards will be able to use PCIE4.0!
[/font][/size][/color]


AMD representatives confirmed that 300- and 400-series AM4 motherboards can support PCIe 4.0. AMD will not lock the out feature, instead it will be up to motherboard vendors to validate and qualify the faster standard on its motherboards on a case-by-case basis. Motherboard vendors that do support the feature will enable it through BIOS updates, but those updates will come at the discretion of the vendor.
[color=#d1d1d1][size=100][font=Lucida Grande, Lucida Sans, Lucida Sans Unicode, sans-serif]Most older motherboards could support a PCIe 4.0 x16 connection to the first slot on the motherboard, but the remainder of the slots could revert to PCIe 3.0 signaling rates. That's because any trace routing on the motherboard that exceeds six inches requires newer redrivers and retimers that support PCIe 4.0's faster signaling rates. That means the PCIe slot nearest to the CPU will easily support PCIe 4.0, while the other slots, including M.2 ports, could run at PCIe 3.0. Support could be limited to slots based upon board, switch, and mux layouts.[/font][/size][/color]


I know it's old news, Unreal being absolutely awesome and photorealistic and all, but everyone likes the showcases, so... I thought I'd post it.
Futurum Fusionem
Top
Stellarator

I really liked the new generation of Ryzen processors from AMD, super! I advise you to look at them, Intel's time is running out.
Hi, guys!)
Top
Kailth

The potential for this is mind-blowing:

Stellarator wrote:
Source of the post The potential for this is mind-blowing:

Everyone knew ray tracing was the future, there are various types that can be done as well, but the problem was "how". Don't expect it to change anything until the next console generation or after though, we need mass market adoption and with Nvidia owning all the tech that is going to slow down adoption quite substantially.
CPU: Intel Core i7-5960X 4.0GHz 8-Core Processor - RAM: G.Skill Ripjaws V Series 32GB (4 x 8GB) DDR4-2400 - GPU: EVGA GeForce RTX 3090 FTW3 ULTRA GAMING 24GB
Quando omni flunkus, moritati
Top
DoctorOfSpace

ugh near monopolization for our loss.  Why dont other companies jump in and compete?  Like AMD (and others)
Top
A-L-E-X

A-L-E-X wrote:
ugh near monopolization for our loss.  Why dont other companies jump in and compete?  Like AMD (and others)

Well they have. Don't let nvidia's flag planting make you think they own the tech, which they definitely don't.
Top
vlad01

vlad01 wrote:
Source of the post Well they have. Don't let nvidia's flag planting make you think they own the tech

Going to burst your bubble because AMD is NOT competing in that video.

Ray tracing has been possible in screen spaced reflections and everything else shown in the RTX and DXR lineup for over a decade if not longer in various previous forms.

What you are seeing in that video is rendering my old 5870 could do in 1920x1080 at around 30fps.  The big reason ray tracing is a thing now is because of Nvidia and their dedicated hardware, you cannot beat this without dedicated hardware which AMD does not have.  Nvidia is using multiple variations of ray tracing, specifically a form of selective path tracing, path tracing being notoriously noisy yet easier to render, followed by an AI denoising.

If you don't have the hardware you cannot do SSRTGI or RTAO or any other advanced ray tracing in a playable framerate or higher resolution, it has nothing to do with software and everything to do with dedicated hardware.

No RT or Tensor cores? No playable framerate.

It is somewhere between a potato and a nuclear reactor.
I do not aim to upgrade anything at the moment, because I would have to throw out everything - except for the GPU -, due to my old motherboard.
Besides, this configuration works well for me for what I use my PC for.
Core i5 2400 @ 3.10GHz, GF GTX 1050Ti 4GB, 8GB DDR3 RAM, CentOS 7
Top
TheObserver
Post Reply