A-L-E-X wrote:
Source of the post Wow, I did not know you can see Venus at noon!

Absolutely.  It can take a bit of effort to spot it, but once you do, it's usually very easy to find again.

The Moon and Venus are moving farther apart now, so it will get harder to find it in daylight until they're close together again.  When I saw it they were about 3 degrees apart.  I also knew where to look from the Moon because I had seen them together before the Sun came up.

A-L-E-X wrote:
Source of the post I had heard some people ask if it's possible to see the brightest stars if you're deep down in a well but I don't think that's possible.

Looking into it further, I found quite a few sources that say it is impossible.  This 1983 paper seems the most persuasive.  But if anyone has tested this themselves, please report in!

Probably the best way to see stars during the day is when the Sun is blocked by the Moon.  But even then I did not waste much time trying to do so since the stars proved much easier to see in actual night time.

Another fun bit of related history.  Throughout the 1800s, astronomers tried very hard to view the Sun's corona from the ground without a total solar eclipse.  Some were convinced that they were even succeeding at it, but most likely they were mistaken.  It was not until the invention of the coronagraph in 1930 that it was finally achieved reliably.

Wow thats fascinating!  I've tried to capture stars with a camera in daylight but it just can't be done, the background sky overwhelms any star and even all planets outside of Venus.  I'm always on the lookout for occultations, as they are one of the most interesting thing you can see from a light polluted sky lol.

Funny thing, I live close to an airport and sometimes for a second, an airplane is in my direct line of sight with the sun and it gets dark here for a split second.  How large would an airplane have to be from say 1,000 feet up to be able to block the sun completely (realizing that since the two are of different shapes it would be really difficult to do- the round sun would mean the oblong plane would have to be excessively large in both dimensions.)  Is it hypothetically possible for a plane to be large enough to block out the sun enough to glimpse the corona or the brightest stars during the day?  I would think not.
Top
A-L-E-X

A-L-E-X wrote:
Source of the post How large would an airplane have to be from say 1,000 feet up to be able to block the sun completely

I'll take a slightly different approach: using measurements of the dimensions of a Boeing 747, from how far away can the plane, seen from below, completely block the Sun?

I found this image for the dimensions of the plane: 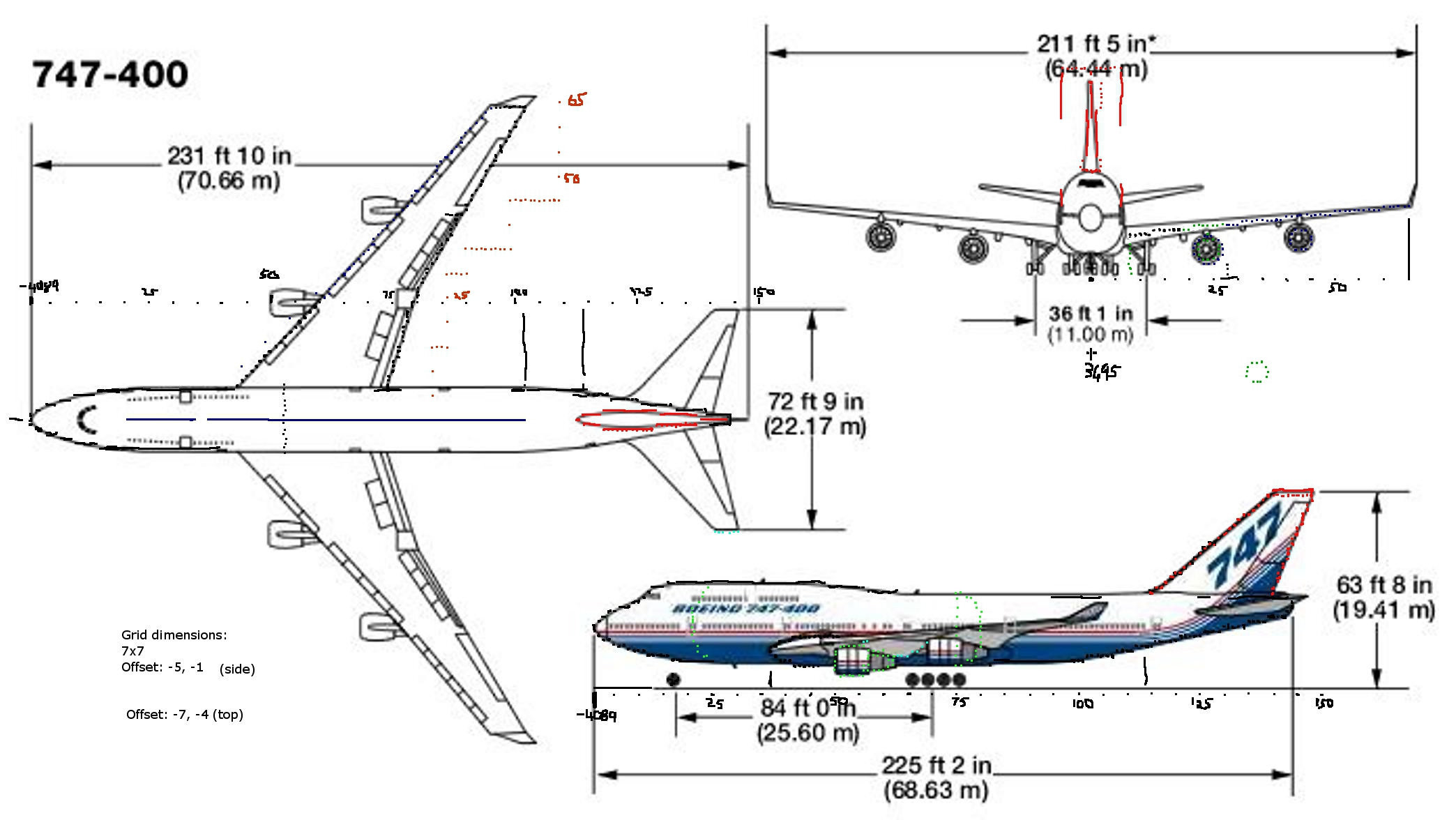 Performing pixel measurements in GIMP, I find the image scale to be .070m per pixel.  Drawing in a full circle, let's find the maximum size of circle that can be 100% obscured by the plane: 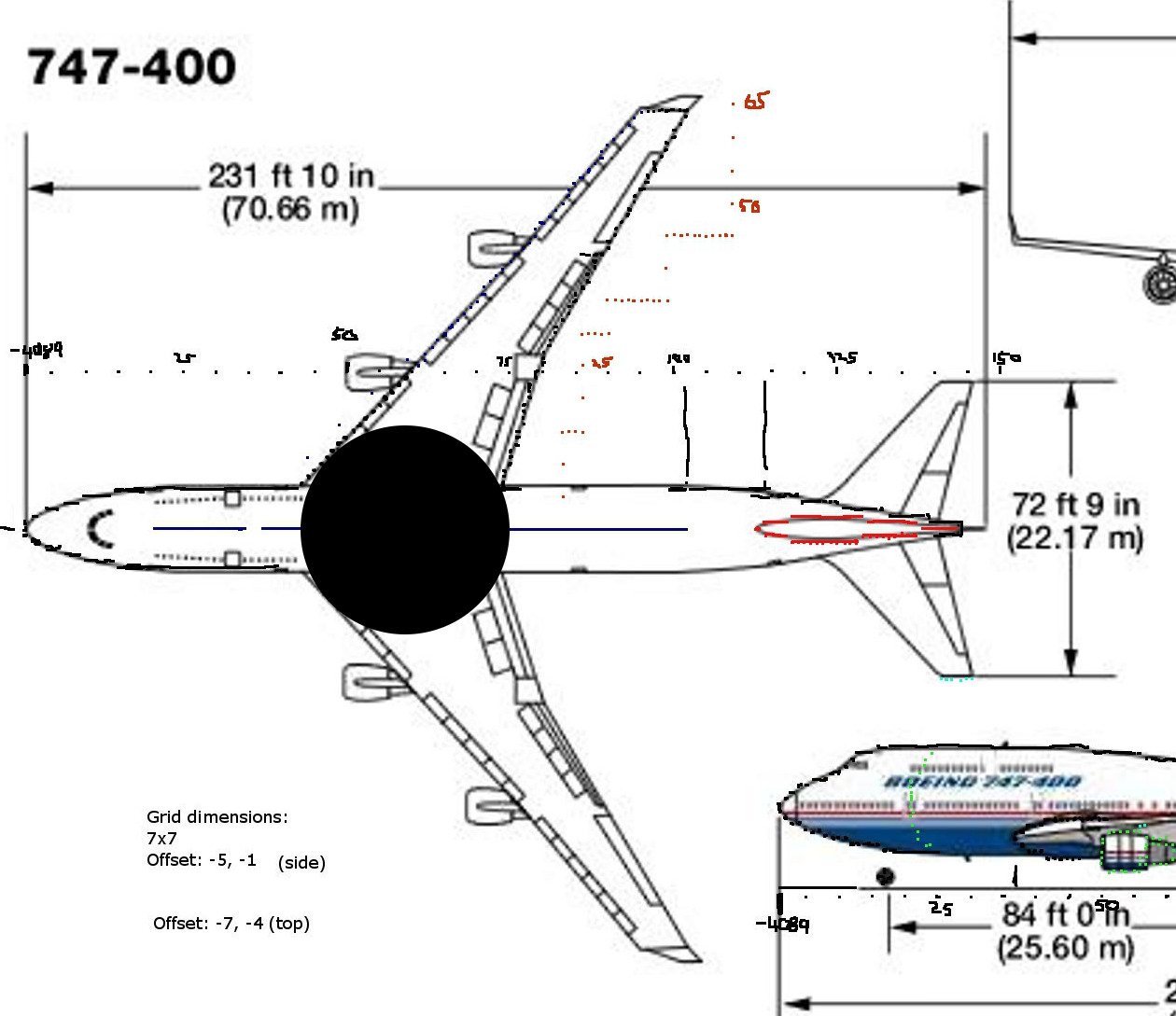 I'm actually surprised by that!  I did not expect a Boeing 747 over a mile in altitude to be able to block the Sun completely (given nearly perfect alignment).  I think this easily explains how aircraft flying to/from your nearby airport are able to cause a brief noticeable dimming.

(Also, from the plane, you can clearly see the shadow on the ground, up to several thousands of feet.)

Could an airplane be large enough to make the stars visible?  Definitely no.  Just like with trying to use a chimney, the sky itself is still too bright.  Stars become visible in eclipses because not only is the Sun blocked, but also the sky brightness is reduced.  And even then it is still somewhat hard to see the stars (though planets are easy), because a lot of light is scattered into the shadow from outside of the totality.  It's more like twilight than night time.

But could the plane cause the Sun's corona to be visible?  Actually, I think it could!  If the plane completely blocks the Sun's photosphere without blocking too much of the surrounding corona, then it basically will act as a coronagraph, and for a brief moment, cause an artificial eclipse on the ground that could render at least the inner corona visible.  But it's definitely not the best method, given both the brief duration of the totality and also the shape of the plane blocking most of the surrounding corona out as well.

Not having any of the Sun's photosphere visible is crucial to seeing the corona by eye.  In the 2017 eclipse the re-appearing Sun made me unable (and unwilling) to see the corona within just a few seconds, which corresponds to a sliver of Sun only a few arcseconds wide, or still more than 99.9% of the Sun being covered!  Really amazing that such a tiny bit of Sun is so bright.

A camera can do better.  By varying the exposure I was able to digitally capture the Sun's corona more than a minute before the totality: 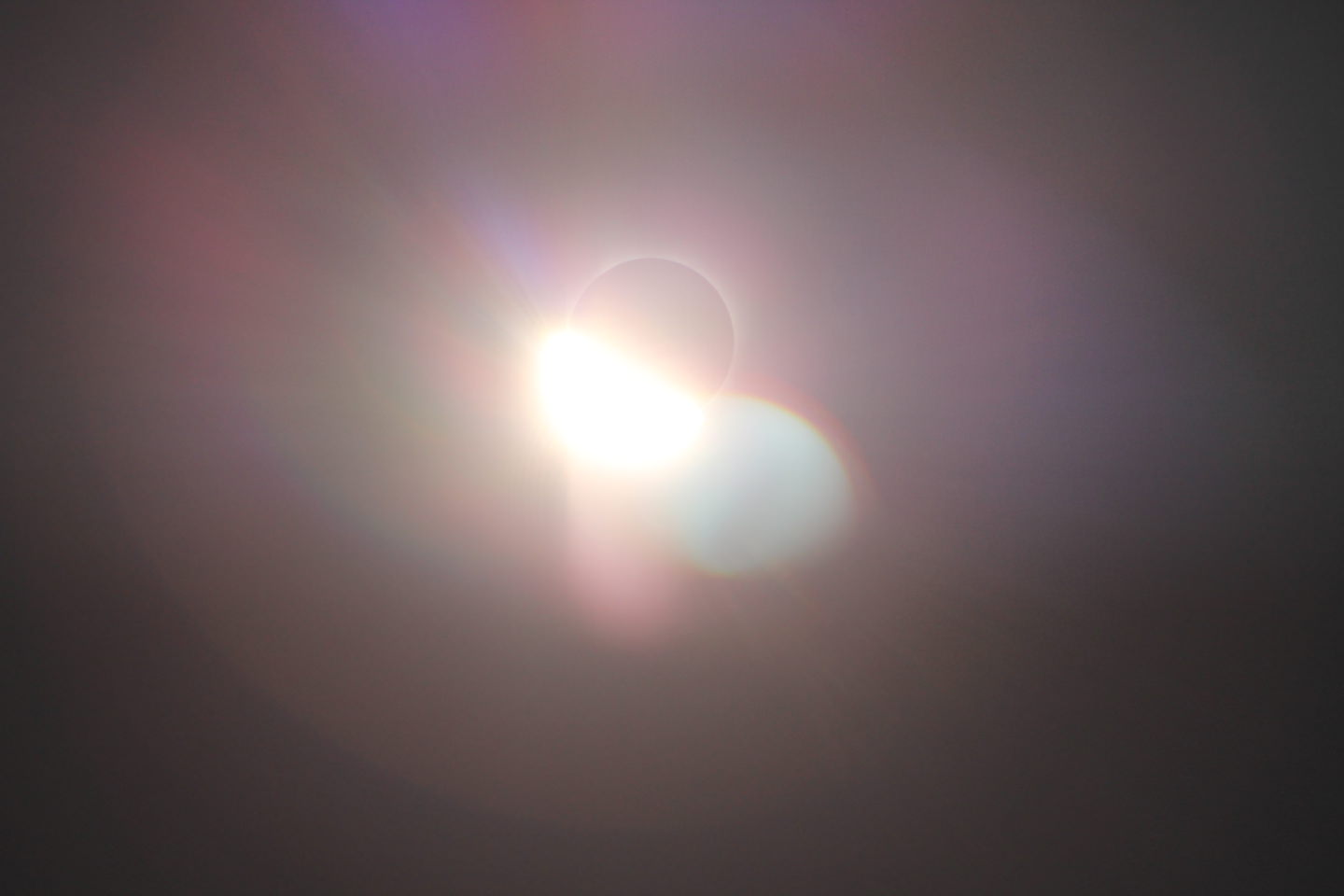 This isn't the best idea to do to a camera, as the more Sun that is showing and the more the magnification, the more heating it will cause on the sensor or inside the camera optics.  Smarter to use a filter.  But for my level of zoom, and also not tracking the Sun, it turned out to be pretty safe during this period.
Top
Watsisname

Wow thanks Wat!  I didn't know eclipse by plane could actually make even part of the corona visible.  The planes as they're coming in to land are definitely lower than 5900 ft, I've seen them come in only a few hundred feet above my head while driving down the highway.

Nice capture of the corona too.  I'm always afraid of frying a camera's sensor with pictures of the sun lol, even just before sunset.  I did get some mylar solar filter stuff that I use on small telescopes and decided to put that over the camera lens and it seems to work well.
Top
A-L-E-X

A challenge for those with the equipment and right observing conditions: Mars and Neptune will be only 2 arc minutes apart tomorrow Friday!
NIL DIFFICILE VOLENTI
Top
midtskogen

Thanks for the heads up!  I would have missed this otherwise.  I was able to spot them with my scope, at least briefly before they got too low. The contrast in color was beautiful.  And it definitely made Neptune easier to find than usual.

Unfortunately I didn't have the time to set up anything to capture it.  Surely others will have photos though.
Top
Watsisname

How large is your scope Wat?
Top
A-L-E-X

Watsisname wrote:
Source of the post And it definitely made Neptune easier to find than usual.

Tell me about it. I could NEVER find Neptune - this one night about three years ago I spent TWO HOURS trying to find it in Aquarius. In the end I didn't find it, but did see the lovely Helix and Saturn Nebulae.
Futurum Fusionem
Top
Stellarator

Having a GOTO scope certainly helps, otherwise it's an exercise in star-hopping with a chart.  I actually like having to work to find an object manually; GOTO is convenient but also takes some of the excitement out of finding a difficult object by navigating the sky.

I have the 8 SE which is a similar model from Celestron.  Great for planets and compact planetary nebulae (with the appropriate filters of course) and splitting multiple stars and globular clusters but not so good for wide FOV open star clusters that I really like, for which I took your advice and got a wide field refractor and a pair of binoculars lol.
The Andromeda Galaxy looks absolutely breathtaking from a high elevation low light pollution spot and a pair of 20x80 or 15x70 binoculars!  Or even with a refractor of similar dimensions (however you then lose the 3D effect of floating in space.)

Regarding GoTo it's a mixed blessing, it can be very convenient but it sucks when you run out of battery power on cold nights.  I sometimes use my 50 ft long outdoor extension cord, but that can be a hassle in itself.
Top
A-L-E-X

Thats why I like large binoculars more, they show the view as your eye actually sees the sky and makes things much easier to find.  Also binoculars seem to work better in light pollution for some reason and I dont have to use all the filters that I use with my telescope (Astronomik UHC, O-3, imaging filter, etc.)
I also think the 15x70 and 20x80 ones are building my muscles (the hard way, my biceps ache after a viewing session lol.)  I prop my elbows on a table which is easier to do with the 15x70 model, with the 20x80 model I think I am going to have to mount it.
Top
A-L-E-X

Woe to me, my backyard lacks arm-rests of any kind!
Futurum Fusionem
Top
Stellarator

Woe to me, my backyard lacks arm-rests of any kind!

When the weather is really cold and I dont want to go outside, I just lay on my side and prop my elbows on the floor and aim the binoculars out through the large windows in my bedroom, I have amazing views of Orion and its nebula from September through January!  I'm really looking forward to that total lunar eclipse in January, the last one we had which was close to my birthday in September a few years ago was a super blood moon lol and the view was fantastic.  I have windows on three sides in my bedroom and they are all about 60" high.
Top
A-L-E-X
Post Reply