midtskogen wrote:
Source of the post The halo is formed when light gets deflected through countless ice crystal, and the minimum deflection is just under 22 degrees, regardless of the distance to the light source.

Yeah, I know the angle that a light rays is deflected through a crystal only depends on the geometry of the crystal.  It makes sense to me that if the crystals are illuminated by parallel rays, then with each crystal deflecting the light by some angle, the viewer will see the light deflected through crystals which are that same angle from the source.  But I thought if the rays were not coming in parallel, then the same deflection angle would lead to a different halo angle seen by the observer.  Otherwise it seems odd that the deflected ray would reach them.  (It would mean more than 22° deflection in this case, if the halo was still seen to be 22° in size).

I agree on the need to know the crystal geometry for noctilucent clouds -- please share whatever information you get back!

Nice!  I have seen several fireballs during my life, some during the middle of the day even.  The last one I saw about 3 years ago I happen to be outside at night lit up all the ground like day and was very green in colour.  Then the sonic boom came about 5-10 min later, about as loud as a jet at a few km altitude overhead, the boom lasted the same duration as the fireball, about 2-3 sec.


One of the best I ever saw was twilight after sunset and something with a tail was lifting up from over the horizon from the east and it continued to fly over breaking apart into many pieces until it crossed about 2/3rd of the entire sky.  It went for about 10-15 sec and vapor trail was visible for another min or so.
Top
vlad01

I think the misconception is that the ice crystals that form the halo are not fixed. Each combination of observer and light source has its own light deflecting crystals, whilst the light angles remain fixed.

Les Cowley tells me that good crystals need to be at least 10 to 20 microns, and noctilucent clouds are made up of much smaller crystals. I suspected something like that.
NIL DIFFICILE VOLENTI
Top
midtskogen

It's been a while since I played with my camera at night, but since I'm on vacations in Alicante I decided to give it a try!

This is the result of the 15x1min pictures from last night: this image's protagonists are the Lagoon Nebula, Trifid Nebula and some star clusters, along with Saturn. 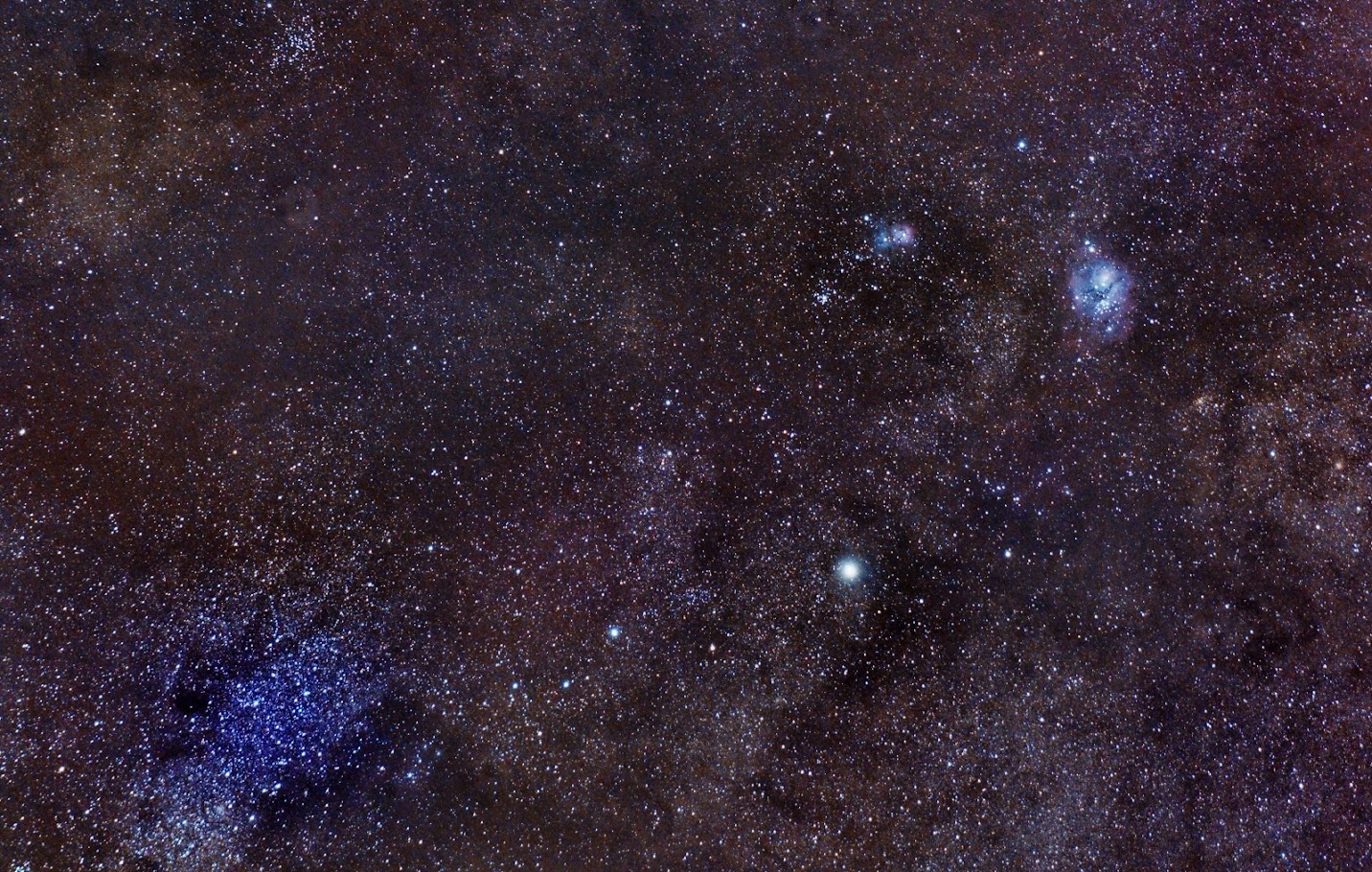 I would like to have all possible critics to keep improving. However, I have a big question: What's that blue "cloud" in the left botton? There is a star cluster there, but it shouldn't be that blue.

I used DSS to stack the images, and PixInsight for processing.
Top
pzampella

Has anyone here on the forum had there astrophotography affected by the rampant wildfires?
Futurum Fusionem
Top
Stellarator

pzampella wrote:
However, I have a big question: What's that blue "cloud" in the left botton? There is a star cluster there, but it shouldn't be that blue.

From wikipedia: Among the nicest of the reflection nebulae are those surrounding the stars of the Pleiades. A blue reflection nebula can also be seen in the same area of the sky as the Trifid Nebula.
Futurum Fusionem
Top
Stellarator

pzampella wrote:
Source of the post I would like to have all possible critics to keep improving. However, I have a big question: What's that blue "cloud" in the left botton? There is a star cluster there, but it shouldn't be that blue.

There is a reflection nebula in the upper right of the image, but I think the exposure on that is actually fine.  The star cluster at bottom left is another matter.  The stars themselves should be blue, but they became oversaturated somehow -- whether from the camera sensor or by some part of the processing I couldn't say.

One possible solution is to adjust in post-processing.  For example, I opened your image in GIMP and made a transparent layer over it, setting the layer mode to saturation at about 70% opacity, and lightly painting over the star cluster with a diffuse white brush also at low opacity.  This turned the star cluster a more uniform blue-white.  There might be better solutions but this worked in a pinch. 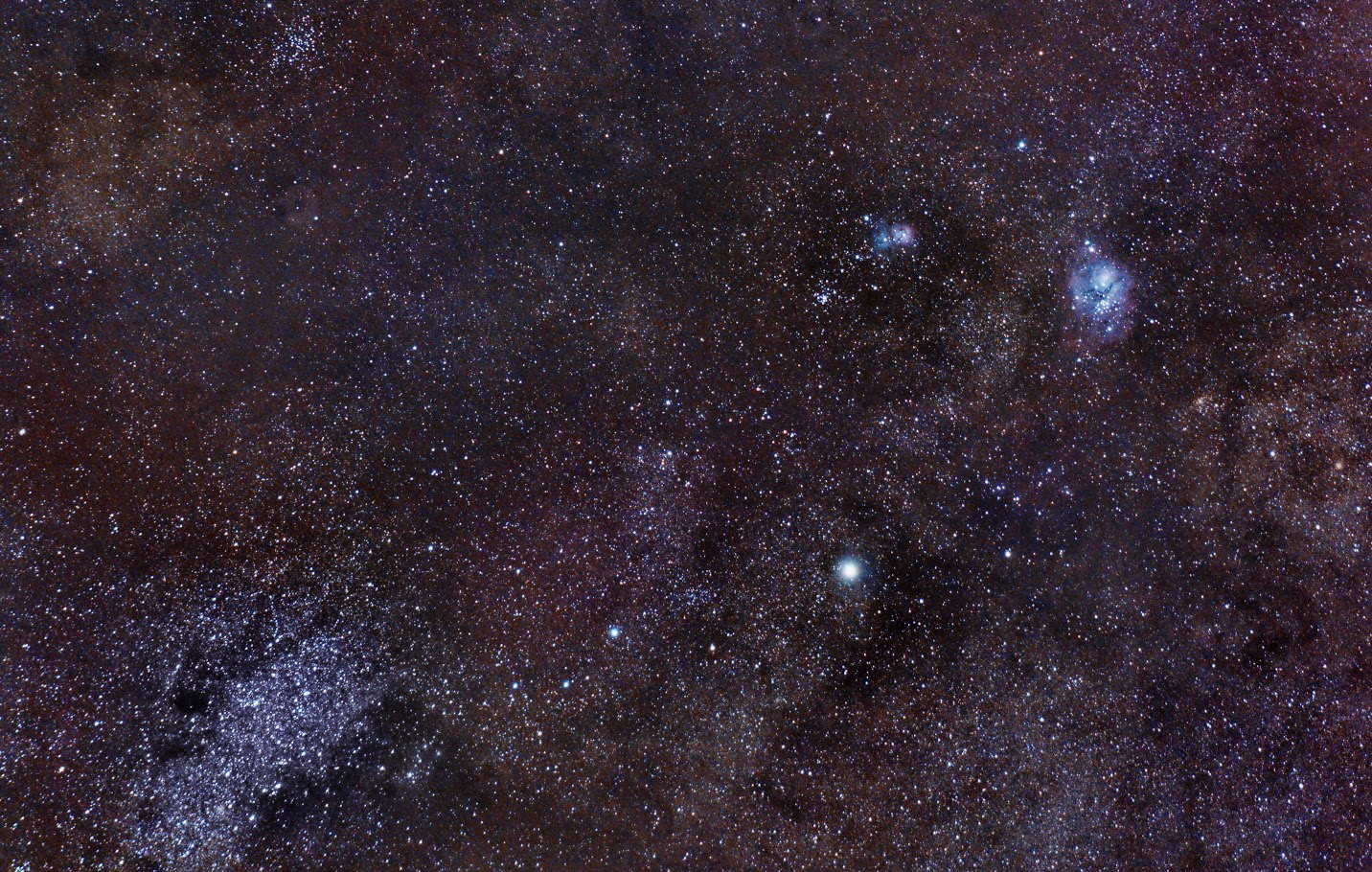 It is a very beautiful image, pzampella. 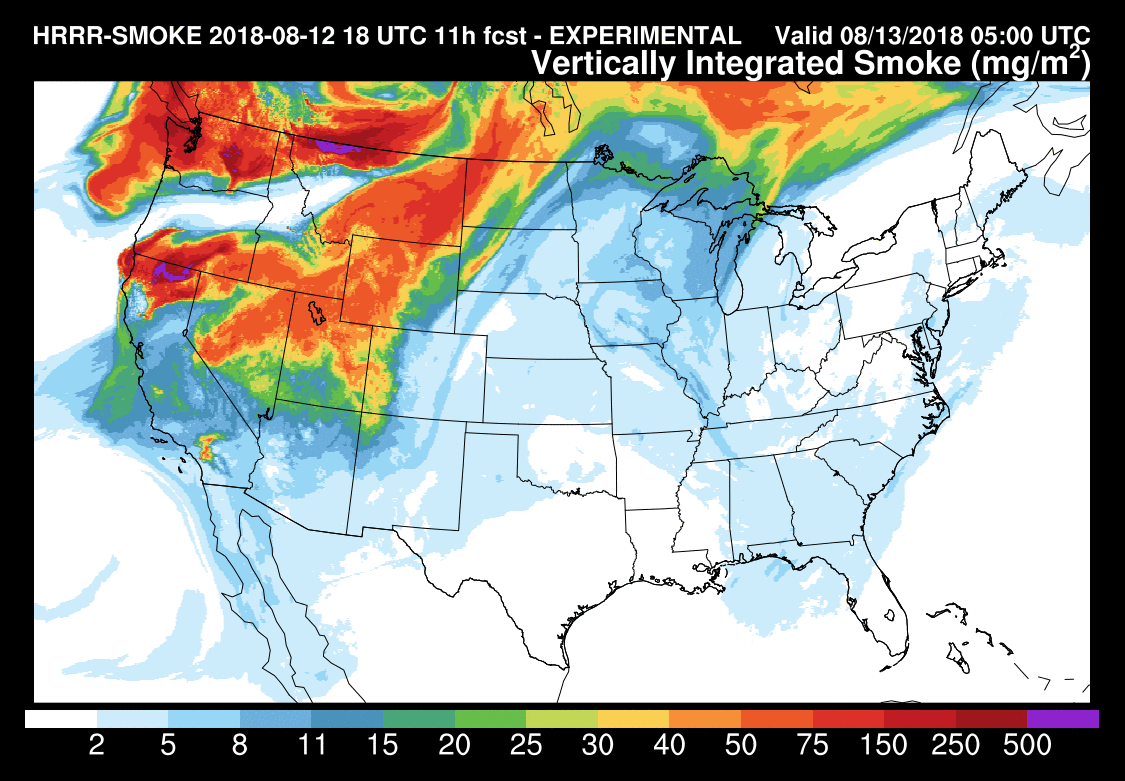 I looked for Perseids between 22:20 and 23:10 last night as stars began to appear.  The sky was still pretty bright, but Perseids can also be bright.  Still, nothing.  Checking my cameras this morning, there was one a few minutes after I went in.  Then roughly 4-5 fairly weak ones per hour and one fairly bright.  Not a single very bright.  So looks like a modest show.  I much prefer the Geminids. Thank you Watsisname! Always with the right answer!

I was also going to hike into the mountains and photograph the Perseids. But when i got out of my house, 7:30PM LA time, this is what I saw: It looks like a misty day on the sea right? Well I live inland in the Rocky Mountains, next to a lake. The smoke has not been this bad since 2003. Click on the images in the linked page for videos.  It will be updated when I have more.
NIL DIFFICILE VOLENTI
Top
midtskogen What kind of lens and filter and exposure time did you use?
NIL DIFFICILE VOLENTI
Top
midtskogen

HarbingerDawn wrote:
Source of the post Apparently I never posted my ISS solar transit photo here. Time to fix that.