Finding a planet that you want to find, is mostly luck, after knowing what settings you need to pick. Cold temperatures tend to knock most toxic gasses out of the air, but the same goes for non-toxic ones as well. So, atmospheres will be thin if you want them to be less likely to carry undesirable gasses. Another factor is Life in SE is assumed to boost Oxygen levels. I don't think Exotic Life does this. It might produce a different gas. How Earth's atmosphere became what it is today, included the work done by CO2 and O2 producing life, but that's a whole 'nother topic. The Creation and Evolution of Primordial Earth's Atmosphere would be a good thread! Yes, I tend to agree this thread should be about what SE is capable of doing with random generations. A thread about creating your own atmospheres would be more than welcomed, it would be a huge resource for everyone!

Anyway, being in the right place is more than half the battle, i.e. luck. In my experience, it seems these procedurally generated Galaxies have Star populations that are congruent somehow, and in their compositions perhaps too. I might find pockets of numerous Blue Giants in one place, or even more Terras in one part of the Galaxy. I might be imagining that too. The algorithms should have some noticeable patterns I would think. So, that means some areas of a Galaxy would normally be thin with certain planet types, again all speculative conjecture at 2am on my part.

Today was a lucky day. The first search I did from a random Black Hole, which I like to use as buoys or markers as I plot my way across a Galaxy, with a 1000 light year radius. No other settings where selected. It found 9917 stars out of a possible 10000. The first star I clicked on showed me this planet: What's nice about this one is the toxic gasses are down at normal Earth levels. You couldn't even smell the H2S, and barely smell the SO2. The temperature is a very very comfortable 10 C, however the air is too thin at .00356atm. You would need to boost the total pressure 50 times over. Then the O2 would be right at Everest Death Zone levels and the CO2 would be tolerable for a couple of hours, but then the toxic gasses would also be up to levels too high to tolerate.

Blearg! OK, so I had to set some settings for another search. I picked, Cold Desert with any life, any biome and an atmosphere within Human preferences (.2 to 1.5atm in this case, I might enlarge that window both directions during other searches). Ah, well looky there, the second planet I found; Oxygen partial pressures the same as 3000m altitude on Earth & inspired O2 is lower than 60%, very good. CO2 levels are the same as the worst days ever, in Earth's urban and industrial centers (nearly deadly), but we have some wiggle room up in them thar hills. No SO2 around at all and you couldn't even smell the H2S. Ah, poop! it's -107 C! I grew up down south, and wouldn't like that one bit! Again we are in luck! Since this is a moon around a Gas Giant, around circumbinary Stars too, there is alot of internal heat from all the friction of tidal forces, creating volcanoes! You would finally have a place to wiggle your toes by the fire, have fun looking up at a honking Gas Giant all night and wake up to a double Sun Rise, without wearing protection. Breathing mask I mean. Radiation might still fry your brain, so you'll have to accept all personal responsibility if you camp out under the stars at night on this new planet. I'm really having a run of good luck, or I'm just in a good patch of this galaxy. Here's another moon you can breathe on, this time with rings, and even slightly better numbers for O2, CO2, and H2S. Its above the Armstrong Limit but overall pressure is still low. Inspired O2 is still up in the danger zone (that too thin, too rich problem again). Carbon Dioxide is just getting into the "knock you on your butt" zone, so we would need to plant a whole bunch of trees quickly. You can barely smell the rotten eggs, you still might now and then, and your eyes will tear up a bit, or maybe that's because you miss the Carbon Monoxide on Earth. Actually I ran into a number of similar planets during my searches, which made my temper go up.

Your idea of planting trees quickly is great, but considering the below-zero temperature, can you explain how this is possible?
Top
elemental

Hmm... then we need to build a forest of these greenhouses in order to remove such a large fraction of CO2, from 0.0658 atm to 0.03 atm..., am I right?
Maybe not trees but some conversion machine we haven't invented yet.

Oh, most certainly not real trees. It would need to be something like algae that keeps working even if freeze dried. Genetically altered lichen, or mosses could do the work after a few tens of thousands of years. There are even arctic caterpillars known of, that could withstand being frozen and thawed out again that could help with pollination. Or better yet, by a thousand fold, would be "artificial trees", basically air scrubbers that use Sodium Hydroxide to collect the CO2 out of the air and store it as little pellets. However, that would also lower the Greenhouse effect caused by CO2, there by lowering the temperature a dozen or so more degrees. The only thing this planet lacks is Water, and Water Vapor to form clouds that could create a better Greenhouse effect. Not to mention a little UV protection. The storms on this moon are already wacked-out enough, as you can see here! Oh boy... that is some serious weather we need to adapt to, and is an problem when building terraforming facilities.
Is that a tornado? Can't really distinguish is interior and exterior.... or what is happening?
Top
elemental

I was just sitting on top of that volcano trying to keep warm, when all of a sudden that hurricane blew overhead. There is no rain on this planet/moon, since it is a desert without water or water vapor. None of the other gasses are liquid at that temperature either. So only howling, super-fast winds, even in this thinner atmosphere, will knock you around. What you see in the first picture above is the first funnel cloud I've ever seen develop. It is directly over the mouth of the volcano, pointing downward, with the sun directly in line of view behind it. Here is a picture from above looking down the spout of the funnel to the edge of the volcano. Here's a weird one. You've got just barely enough O2, equal to Everest Death Zone levels, CO2 is just under the mark for loss of consciousness, so you wont pass out, H2S will only cause you to lose your sense of smell, and that's just as SO2 creeps into the range of being detectable by smell. All on the edge of safety limits.

Even though the air is non-toxic and even the inspired rate of O2 is within safety standards (<60%), walking around here, your blood would boil inside your veins. The total atm is too low! The Armstrong Limit is .165atm. I don't think a pressure suit would even help, since your lungs could never transfer the O2 to your blood stream. Gnargenox wrote:
Source of the post The storms on this moon are already wacked-out enough, as you can see here!

I've seen many a cyclone in Space Engine, but never any storm quite like that before. Susan, get my pants!
Top
Watsisname

Yup! LOL, better get him two pair Susan!
Here's another with a little bit too much O2, no toxic gasses though, and bone chilling cold. I have found a planet that might be breatheable. You'd probably have to stay near the mountains. 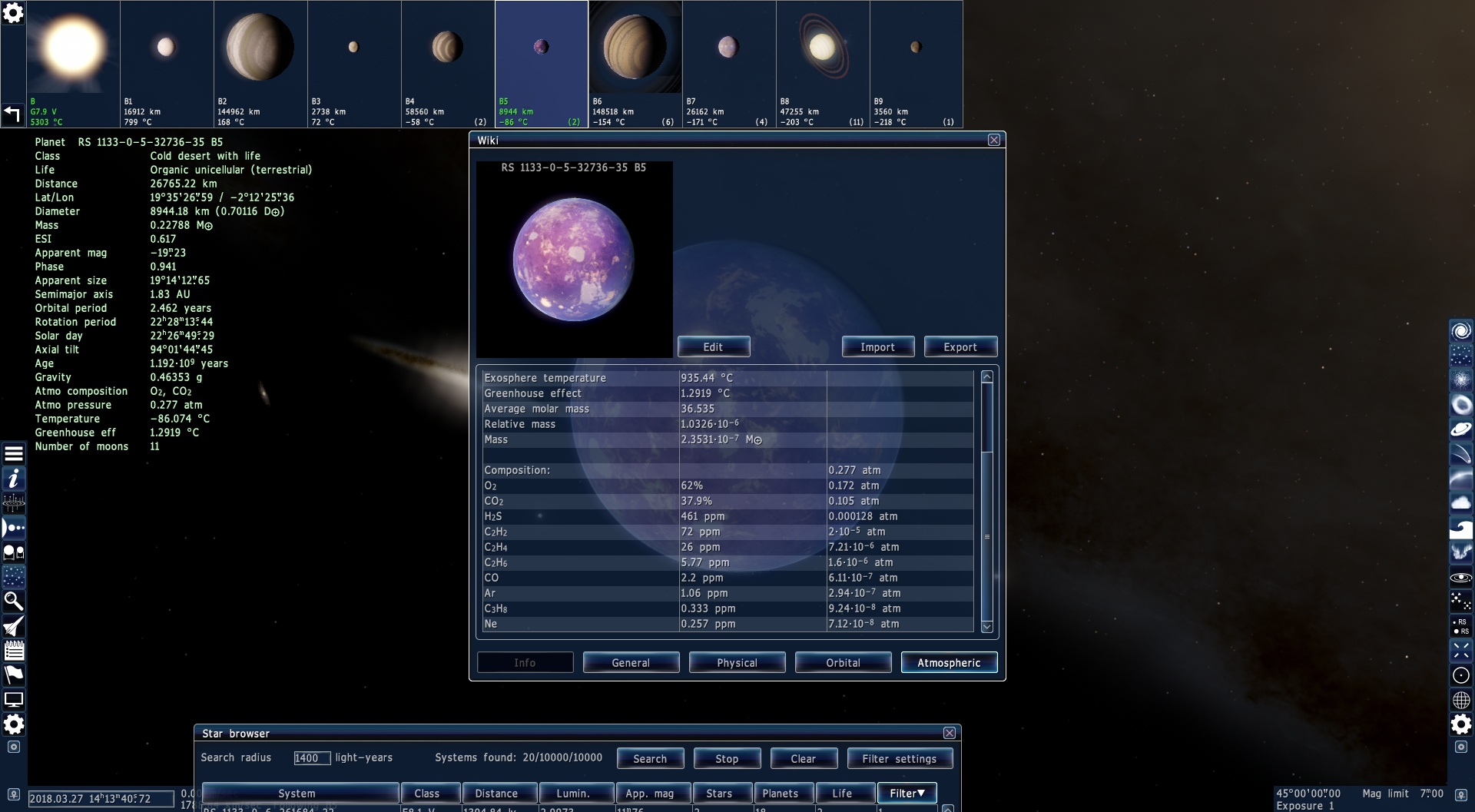 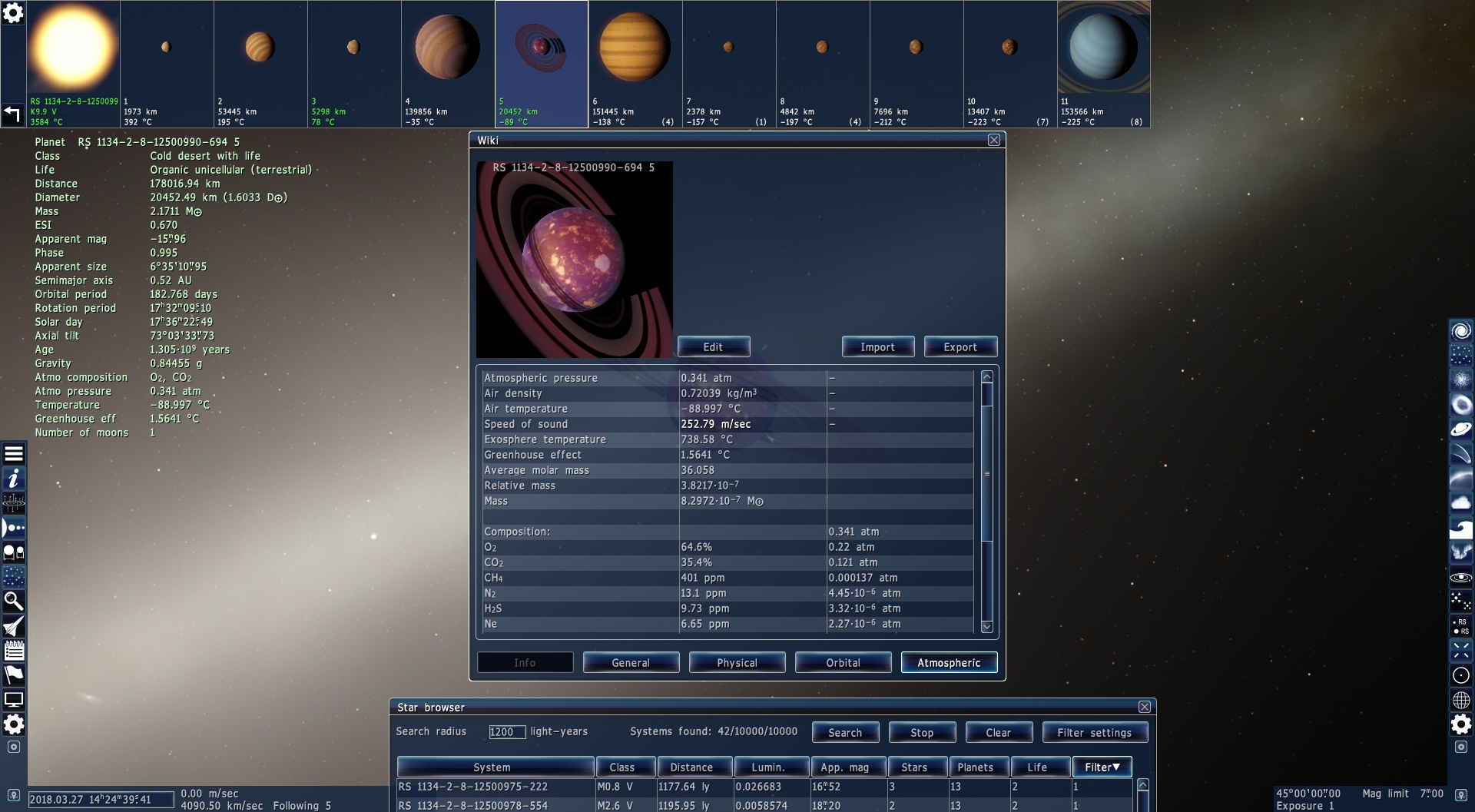 Almost!  The CO2's a bit too high, but by the time you move up in altitude enough to make that tolerable, the O2 pressure would be too low.

Gnargenox, nice!  I'll call that a breathable one, ignoring the cold of course.

I think at this point we've found so many breathable cold deserts it might be good to search more for temperate ones, or terras.  Dang if they aren't even harder to find, though!
Top
Watsisname
Post Reply