Nice little planet with 0.3 O2, the CO2 would be a problem though, as would the SO2. 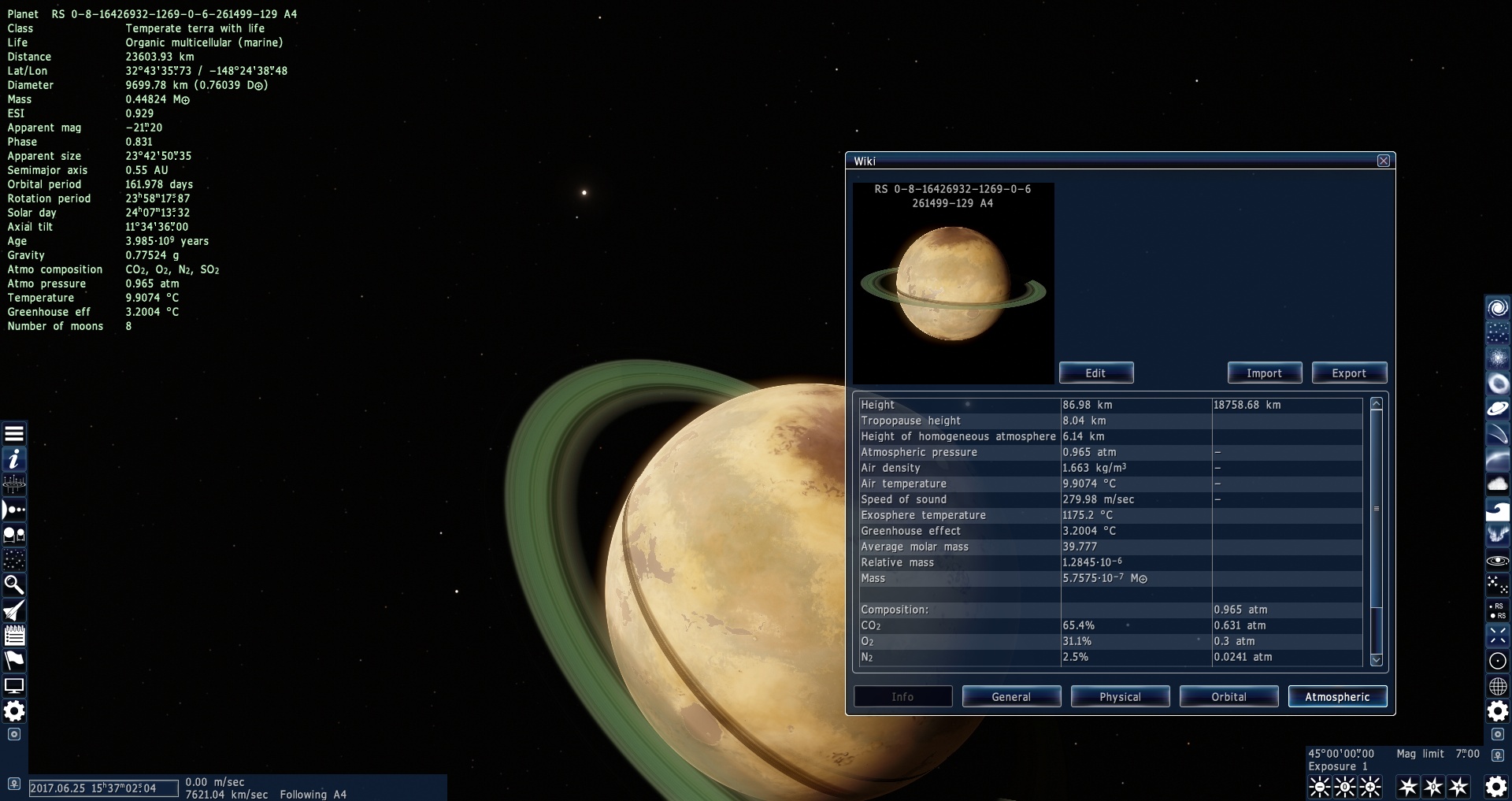 Dude, there isn't any SO2! That's an amazing find. The only bad thing is the CO2 in levels that high.

VirgoServal wrote:
Source of the post Dude, there isn't any SO2!

Yes there is -- it's further down the composition list, and is also listed in the info at upper left.  Any gas that's over 1% concentration is listed there, in order of decreasing concentration.

That also makes for an easy way to quickly see if the atmosphere is not breathable (but not necessarily that it is breathable), without having to open the info tab.  If you see SO2 listed at upper left, it can't be breathable, because you need at least 0.1atm (of 100% oxygen) to breathe, but 1% SO2 out of 0.1atm total pressure is still a fatal amount.

Similarly, if the atmo composition lists CO2 before O2, then it can't be breathable.
Top
Watsisname

Has anyone found a planet with a truly breatheable atmosphere?
Top
Cantra

i searched for hours actually in the new beta and it's still the same. most terras with life i find have 70%+ of CO2 and low amount of oxygen.
"man cannot discover new oceans unless he has the courage to lose sight of the shore"
-Andre Gide
Top
Spacer

Starlight Glimmer wrote:
Source of the post Has anyone found a planet with a truly breatheable atmosphere?

Yes.  I found this desert where the air is completely breathable.  It's just extremely cold. 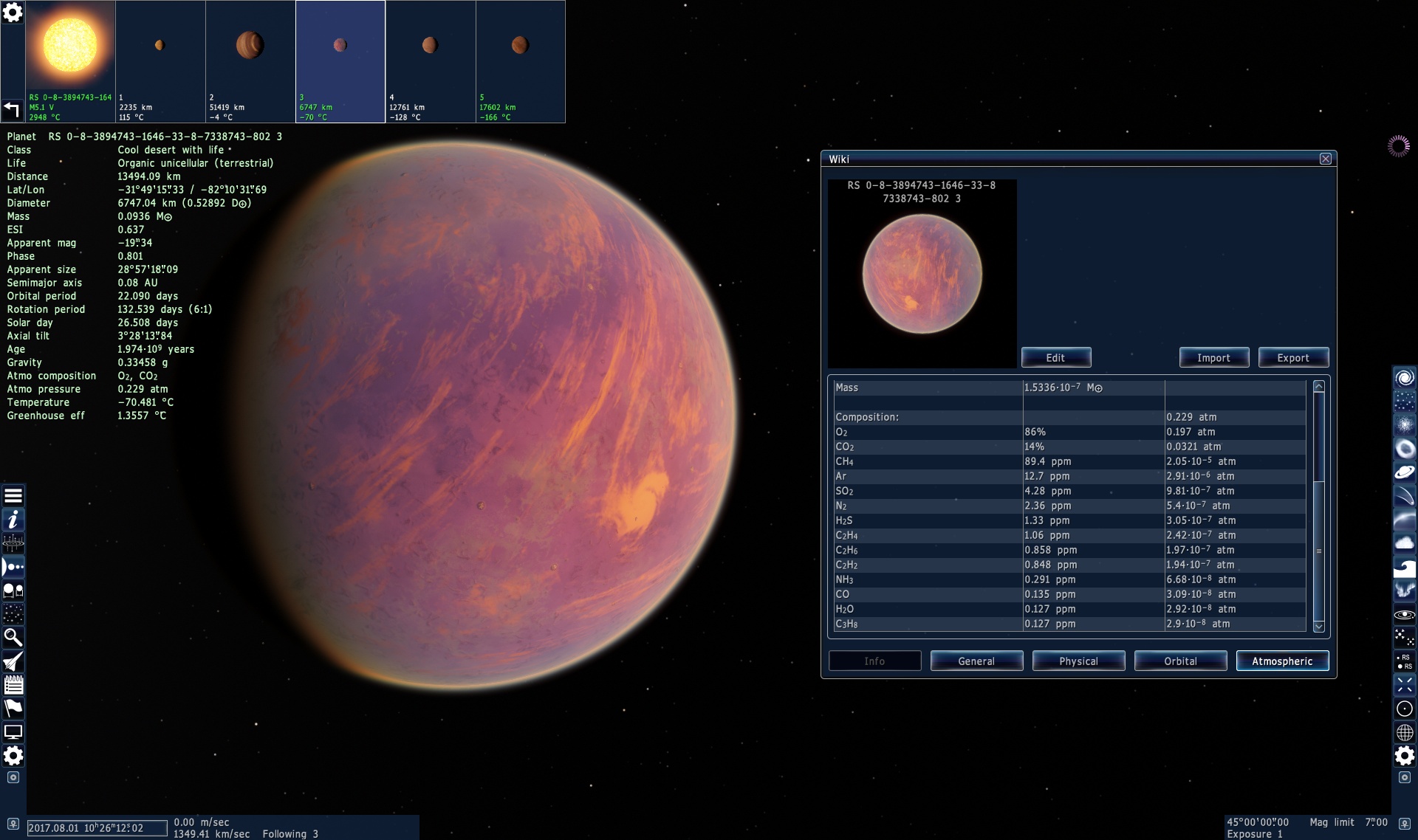 Maddox found this desert which is fairly similar: 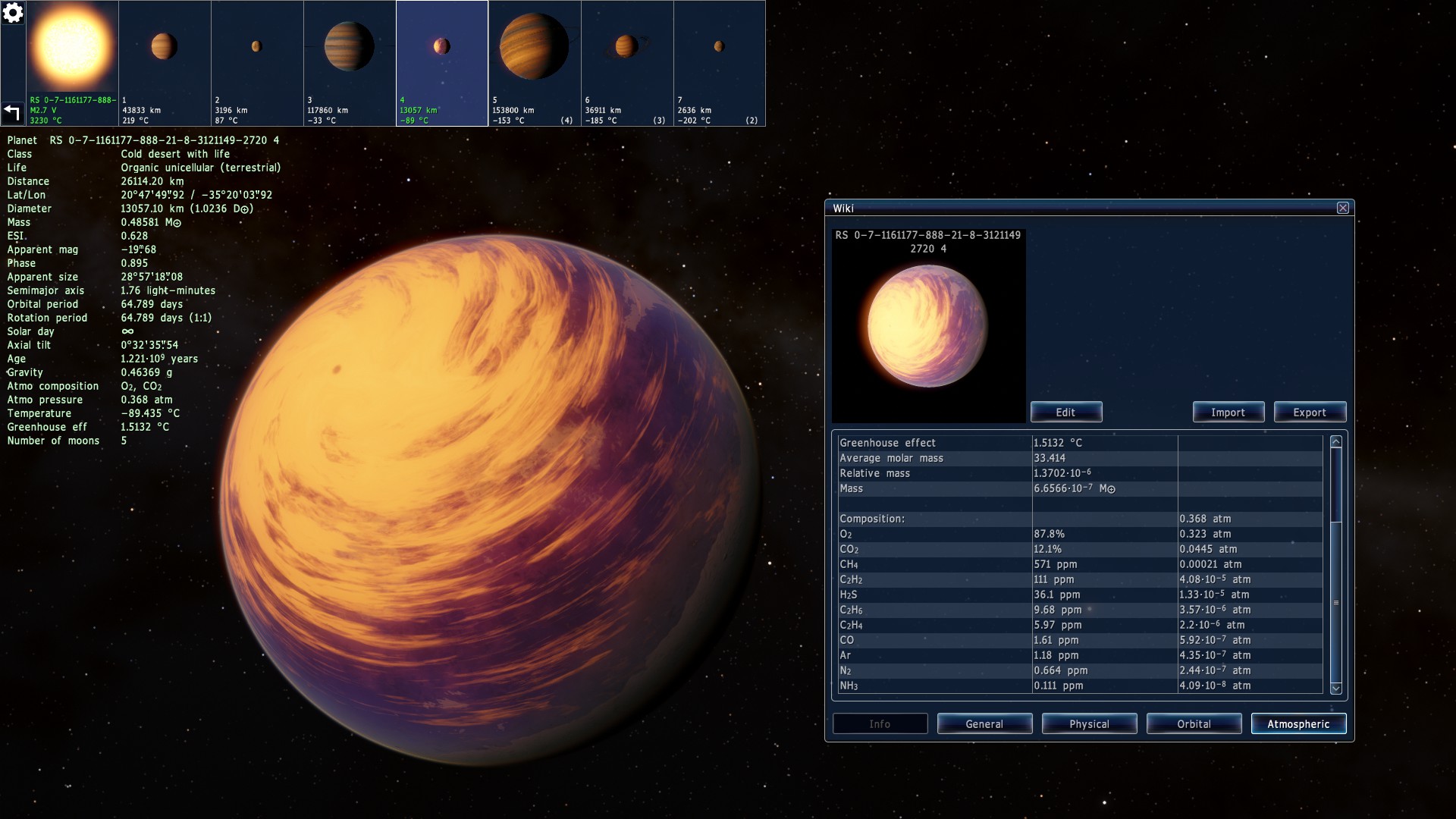 And Gnargenox found this terra.  The O2 level here would be like being at extreme high altitude and right at the limit of survivability, so you would have to get acclimated to it.  The SO2 would also be annoying. Sorry if I missed any others, but these are the three I'm aware of so far.
Top
Watsisname

Ah. Those are nice finds.

I spent about 30 minutes today, I noticed that terras around Red dwarf stars often have Co2 first, then N2 and O2. Seems to be a common theme.

I found this planet, which is the best I have managed to find so far. I think this planet would be a little warm for humanity, and the tidal locking would also be an issue. The air pressure is low. We may have to wear pressure suits or something like that on this planet, but after a few generations, perhaps a millenia humanity would probably adapt. It also has a rather busy sky and planetary system.

It would be like at being extreme extreme high altitude I think in terms of the oxygen levels. 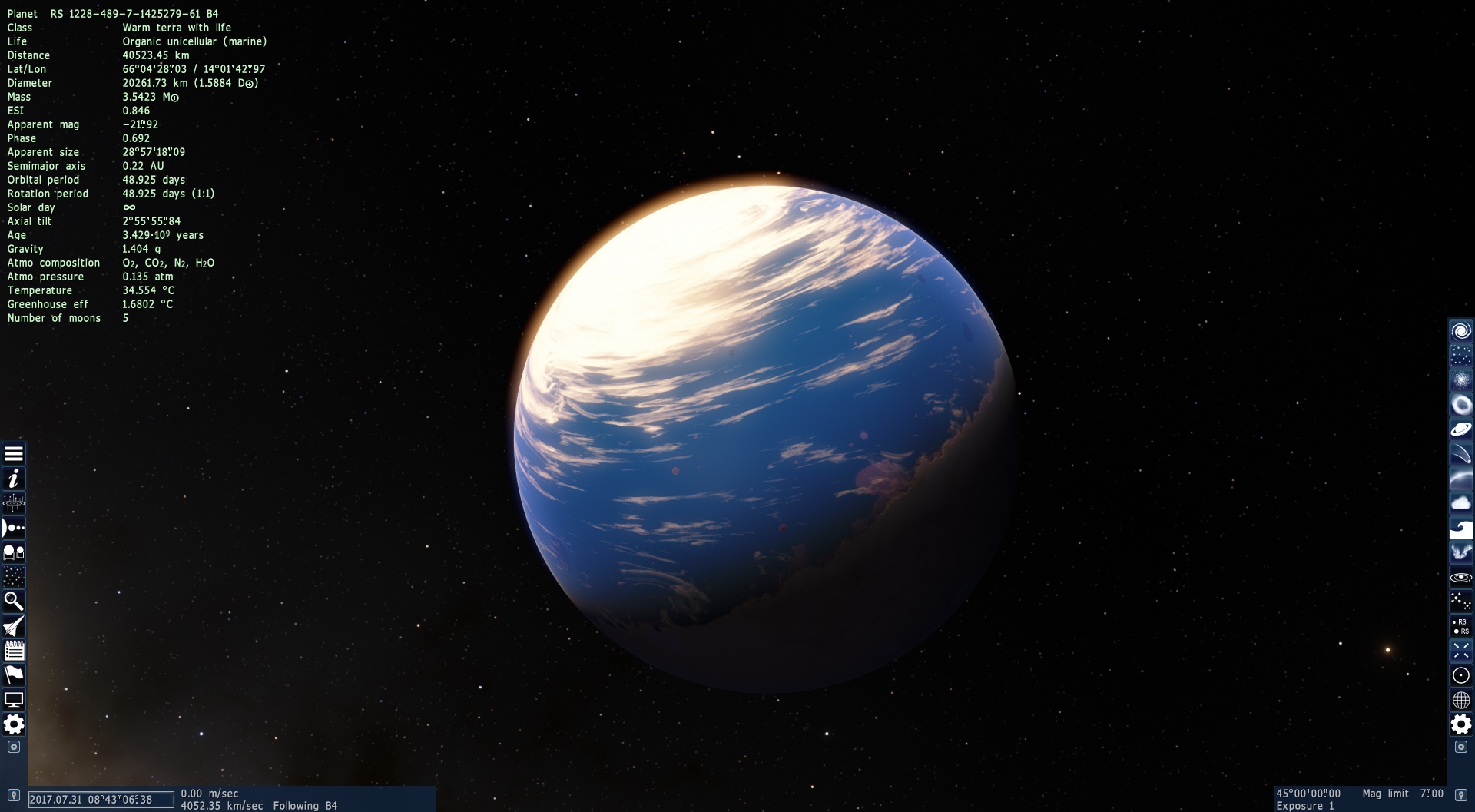 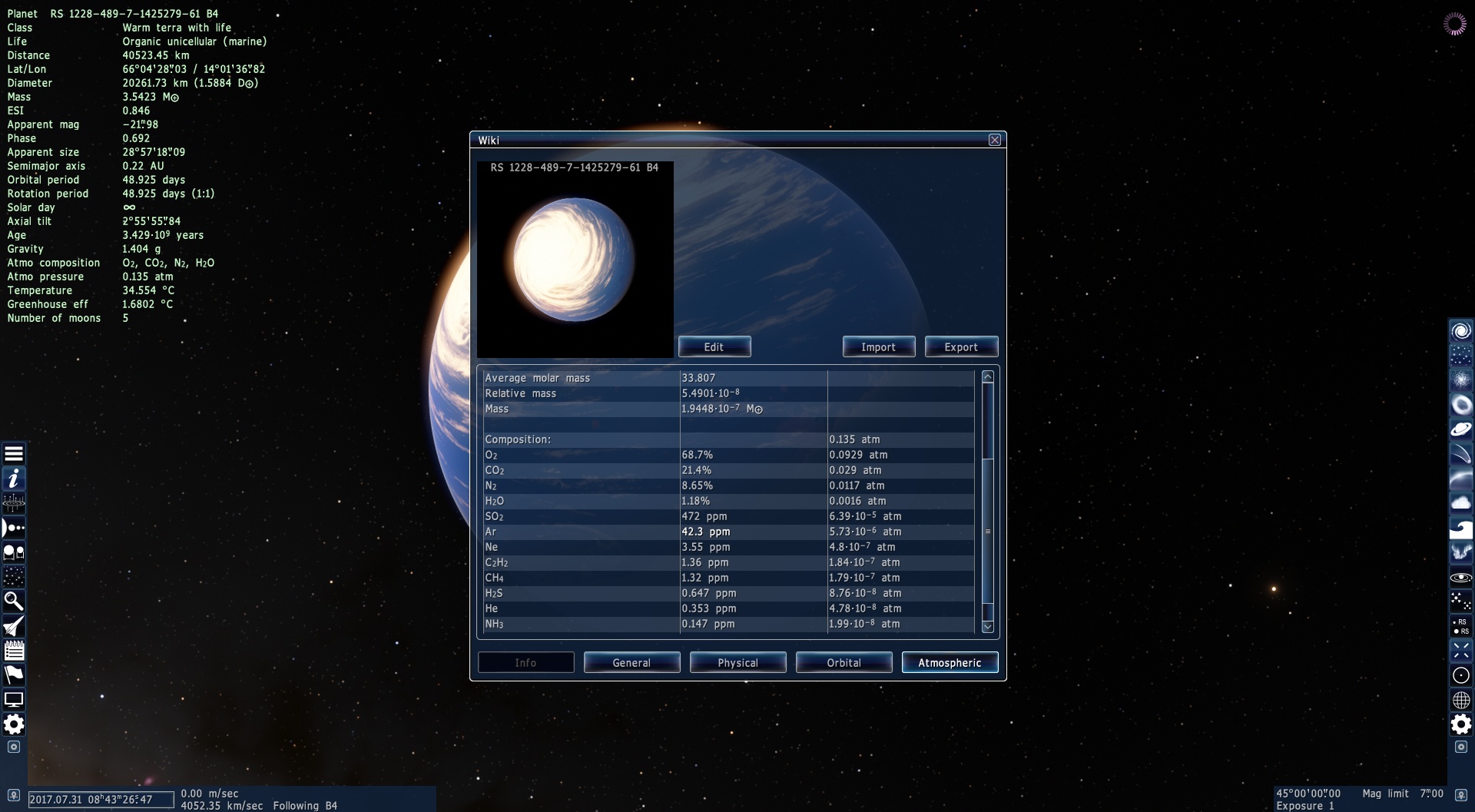 EDIT: After searching around in the Triangulum Galaxy I found some more finds. Some of them aren't as promising though.

This one here is on the cold side, and the thin side. 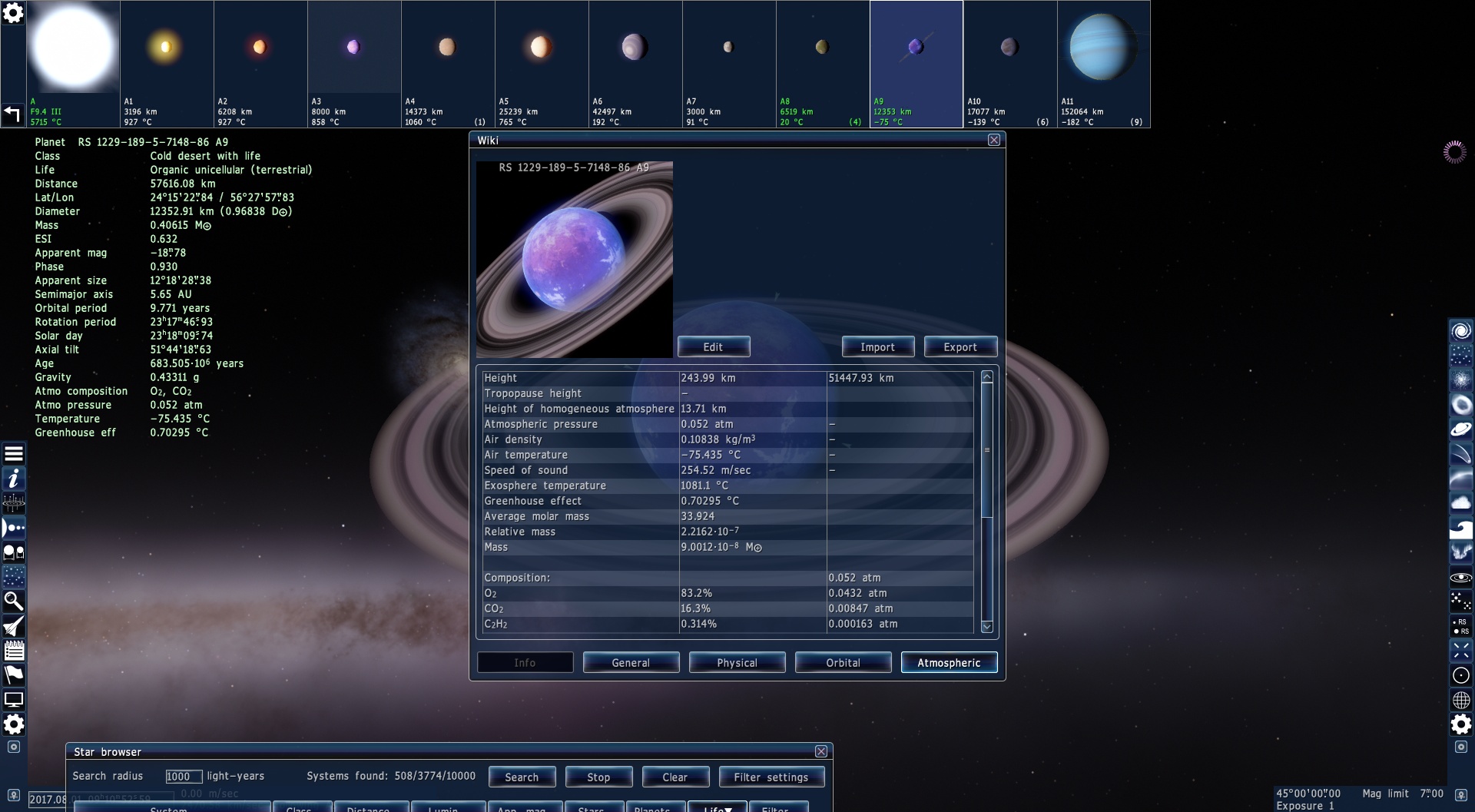 This one is similary sized to earth, but it is boiling hot, literally. 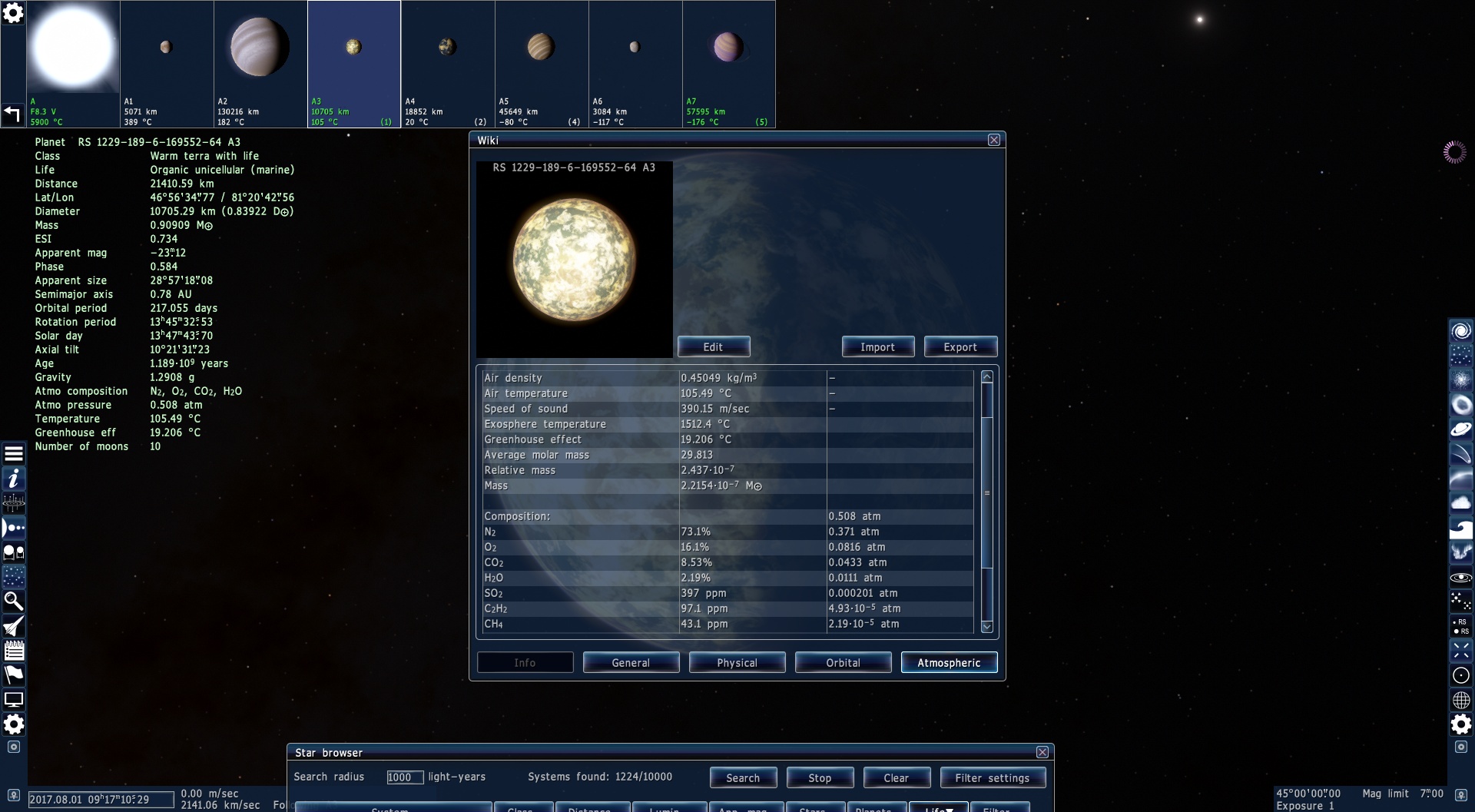 This planet is quite cold, and its atmosphere is quite thin. No So2 though. 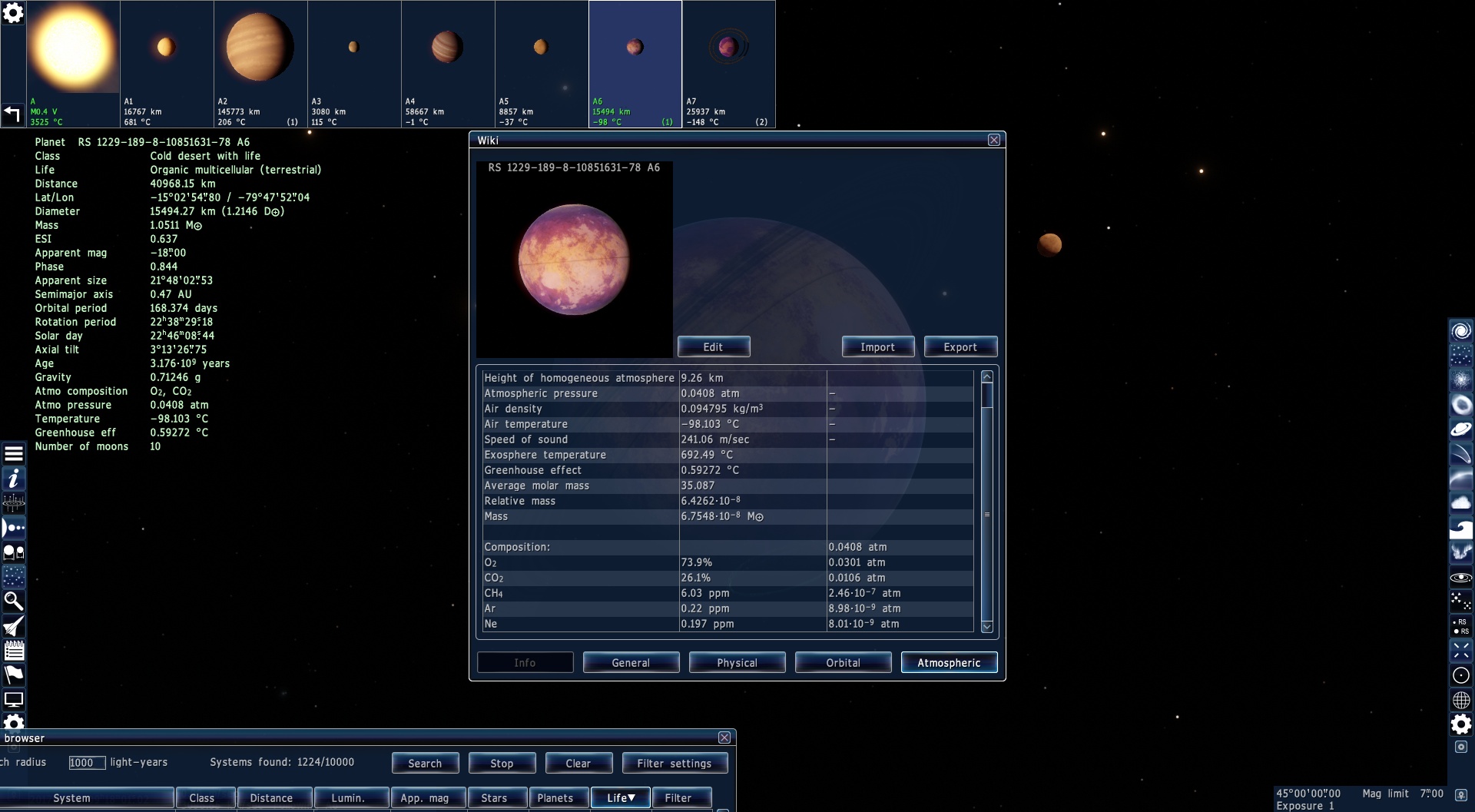 The last one here is on the hot and thin side. 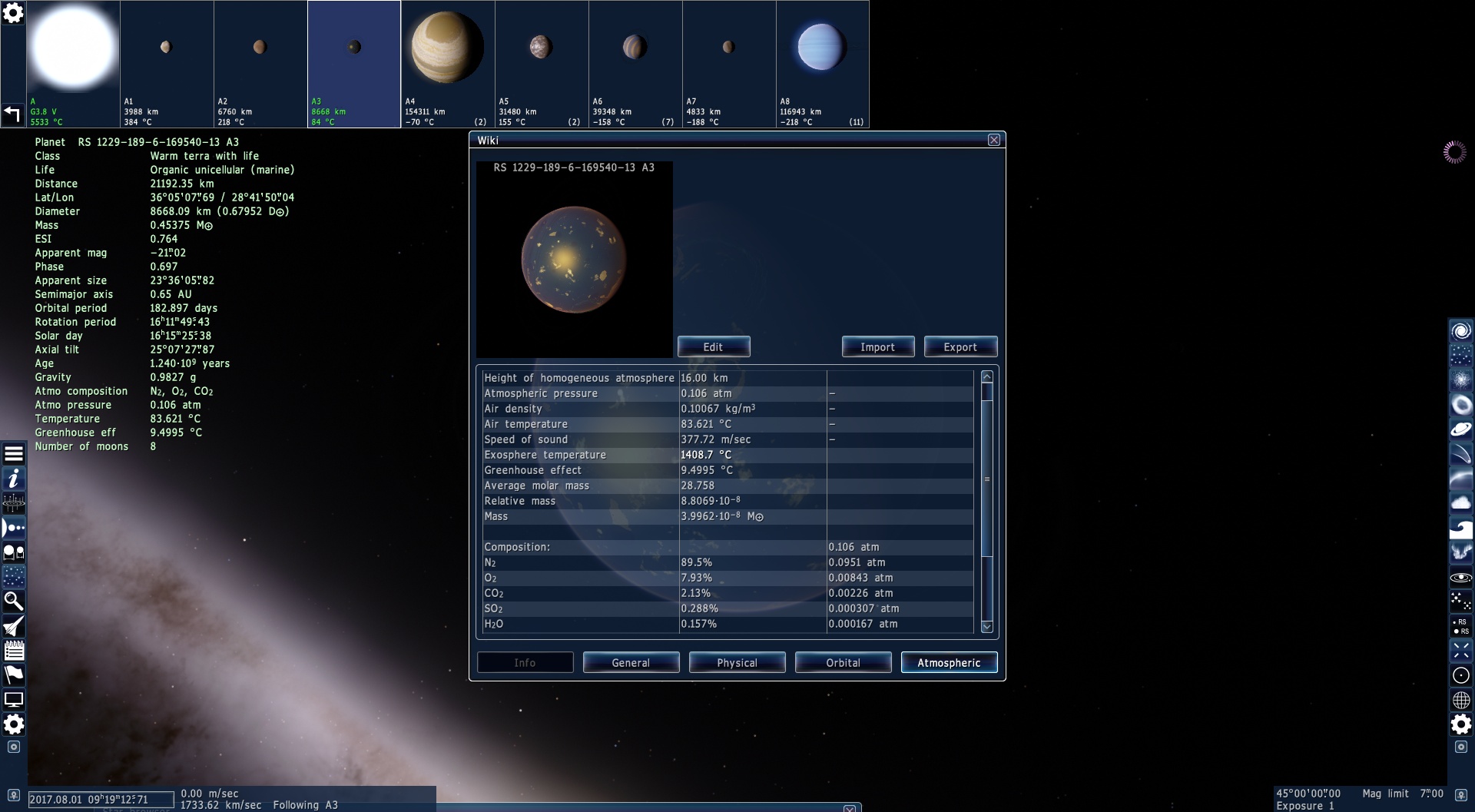 EDIT 2:
And after more searching. It finally payed off. Found the crown jewel of all my finds so far. 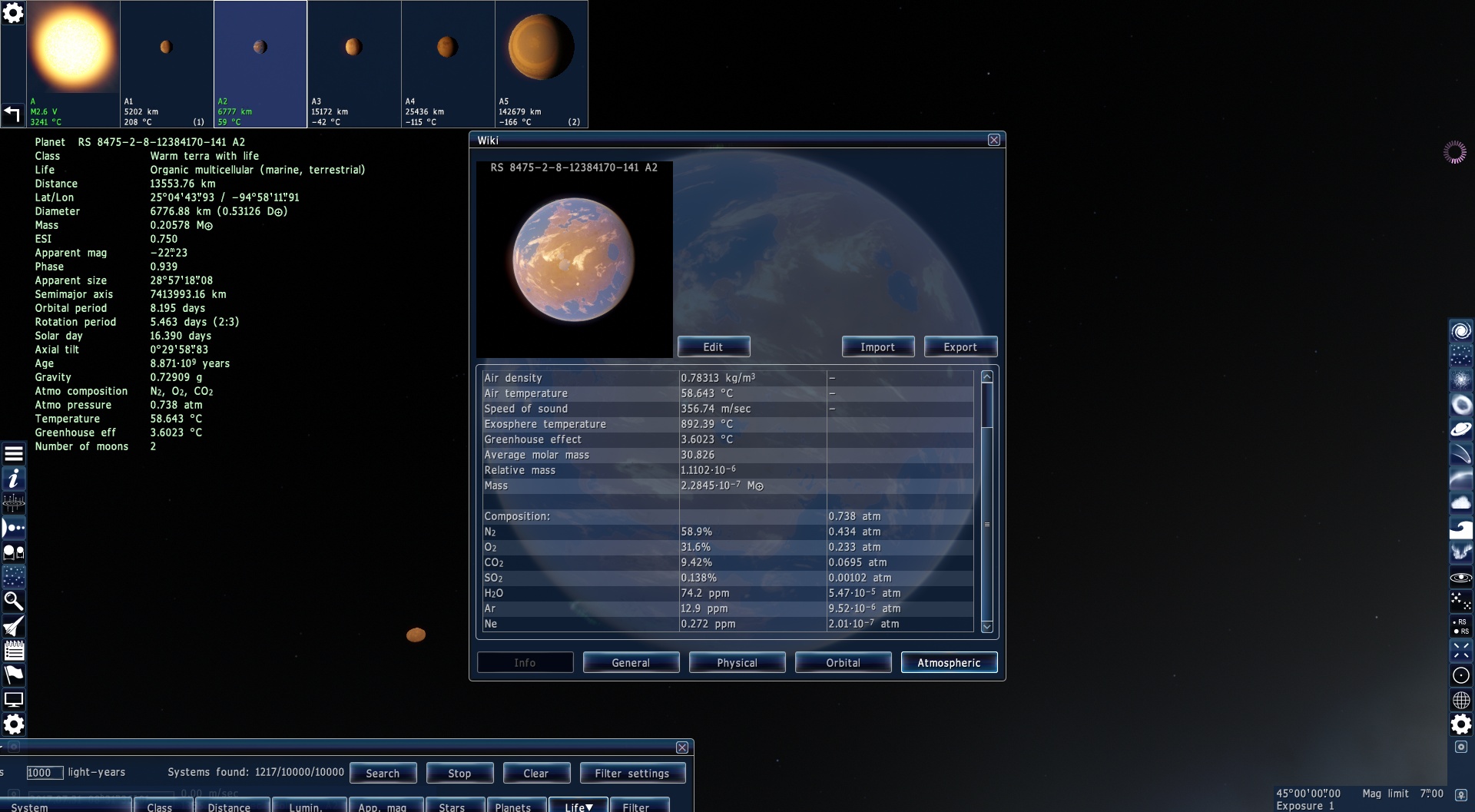 WOW~ Your first one RS 1228-489-7-1425279-61 B4 looks really great, but the percentages are misleading without taking into account the thinness of the atmosphere. The pressure is too low to get the oxygen to pass into your blood stream even if there is a high enough percentage of oxygen in the air. The oxygen will still however irritate the lungs at such a high percentage (for that total air pressure). It is actually toxic after a few hours. This type of Hyperoxia (or Oxygen poisoning) is called the Lorraine Smith effect. Oxygen Toxicity pdf

See the chart on first page of this thread to see extremes humans can tolerate. I've marked a copy of the Human Survivable Limits chart in purple with your planet's percentage of oxygen in the air and the pressure of the air. An ATM of .135 is equal to about 286 pound-force per square foot. Also you are very close to the Armstrong Limit, (.06 ATM) where pressures are so low that your blood boils in your veins. Plans to colonize your planet are going to have to be placed on hold until a genetic solution can be found. Don't blow the planet up just yet. Unfortunately the other planets you found have too little oxygen to start with, other than the "hot-box" RS 1229-189-6-169552-64 A3. If you can stand air temp high enough to boil water, the SO2 would still make life a pain in the neck (and eyes, nose & throat) after about an hour. I would still consider placing it in the Hitchhiker's Guide by Megadodo Publications under the entry "Places you might not be eaten by a Vogon".

Gnargenox wrote:
Source of the post See the chart on first page of this thread to see extremes humans can tolerate. I've marked a copy of the Human Survivable Limits chart in purple with your planet's percentage of oxygen in the air and the pressure of the air. An ATM of .135 is equal to about 286 pound-force per square foot.

Slight mix up -- the figure is in pounds per square inch, so the mark should be at 1.98 psi which is in the "death by anoxia" range.

Good stuff with the rest.  And really nice planet, Starlight!  It's very close.

Gnargenox wrote:
Source of the post See the chart on first page of this thread to see extremes humans can tolerate.

The chart seems to claim than 0% oxygen is safe for pressures equivalent to 400 - 2000 feet depths.
NIL DIFFICILE VOLENTI
Top
midtskogen

It does not truly hit zero of course, but it does get very close.  For divers at 130m (~400ft) depth, they need about 10% oxygen concentration, and at 600+ meters (2000+ ft) it drops to only 2%.  So it looks like the "safe zone" at lower concentrations shown in the figure is slightly left of what it should be.
Top
Watsisname

Okay, thank you for your insights, that first one is really on the border of survivability. Perhaps with some genetic engineering humans, or an offshoot of the human species might be able to survive on it, same goes for "Hotbox".

I'll keep looking though, and post some more finds when I find them.

How about that last one? How does that one work out for survivability? I doubt I can top that one but I'll keep searching.

Edit:
I've found around 5 more planets. Some of them have CO2 and SO2 levels that might be annoying, but they are a bit iffy.

The CO2 on this one might be too high. 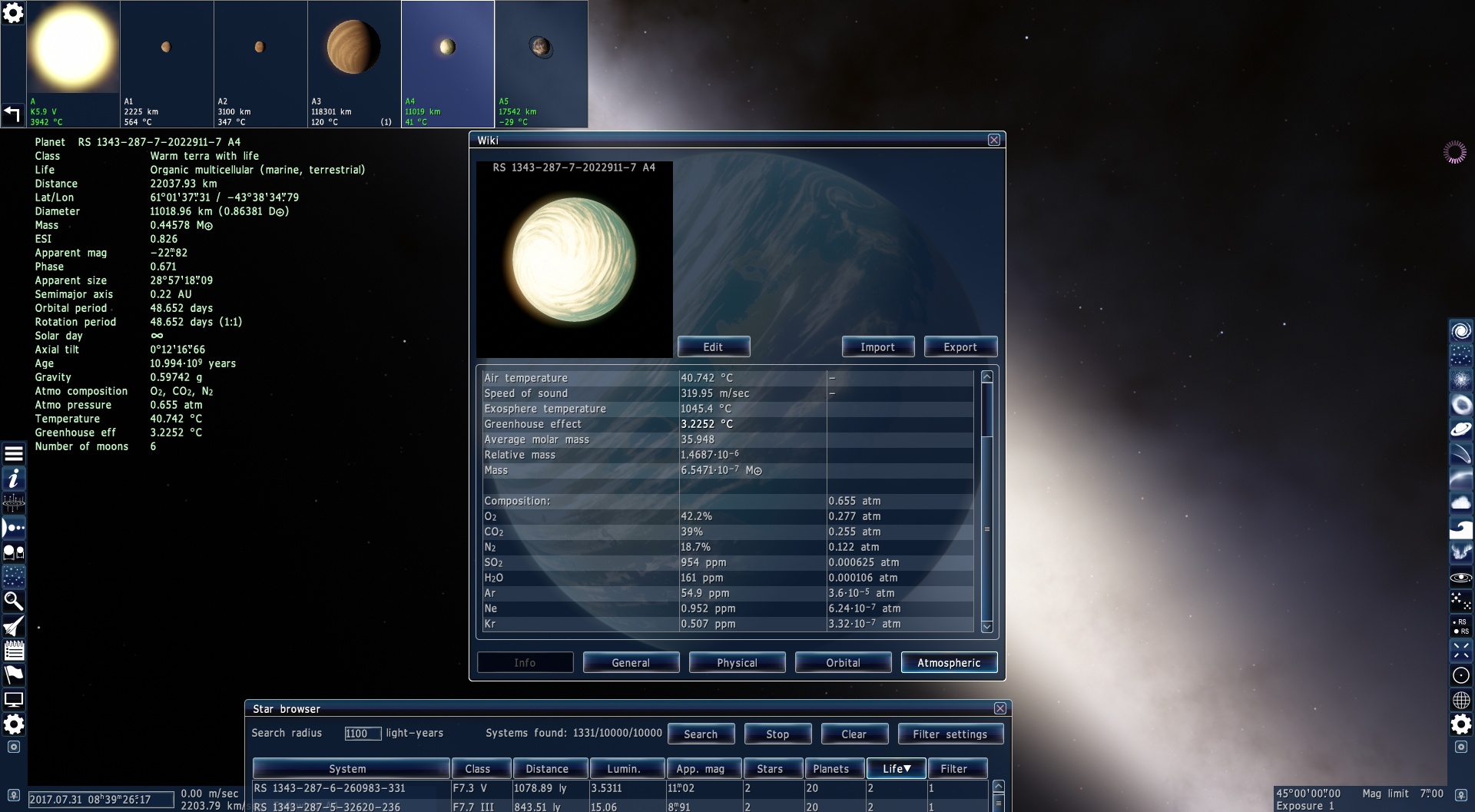 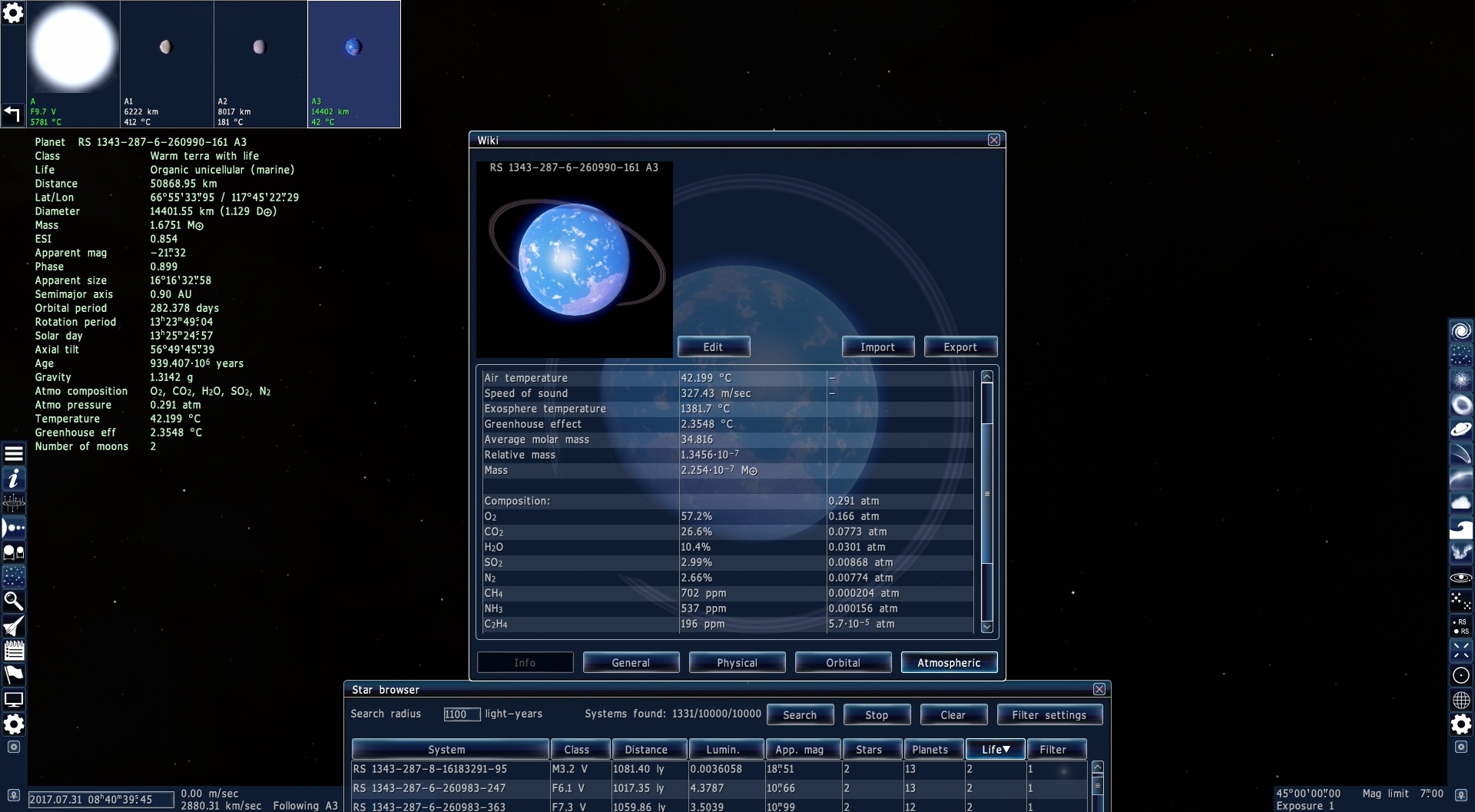 Another one with iffy CO2 levels. 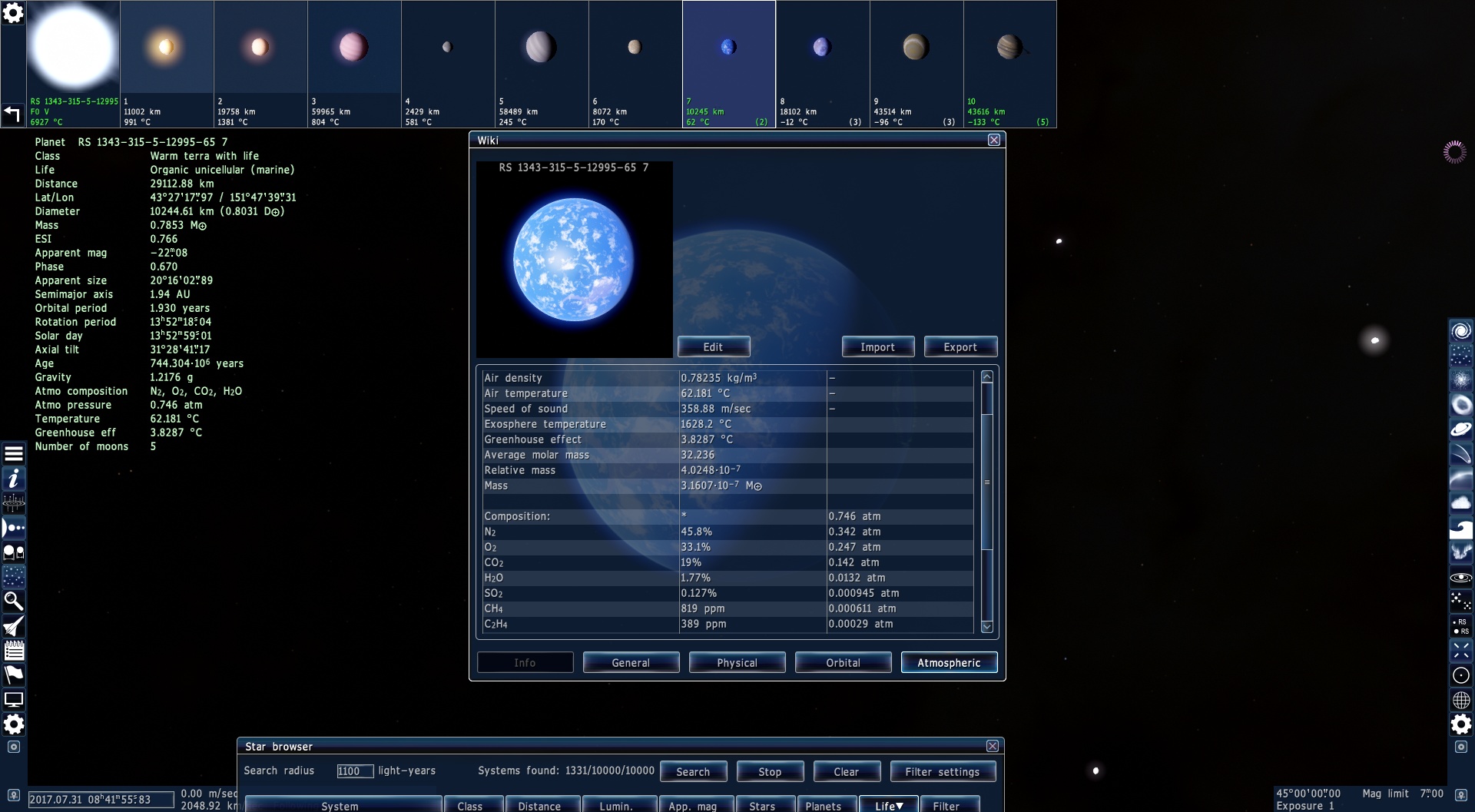 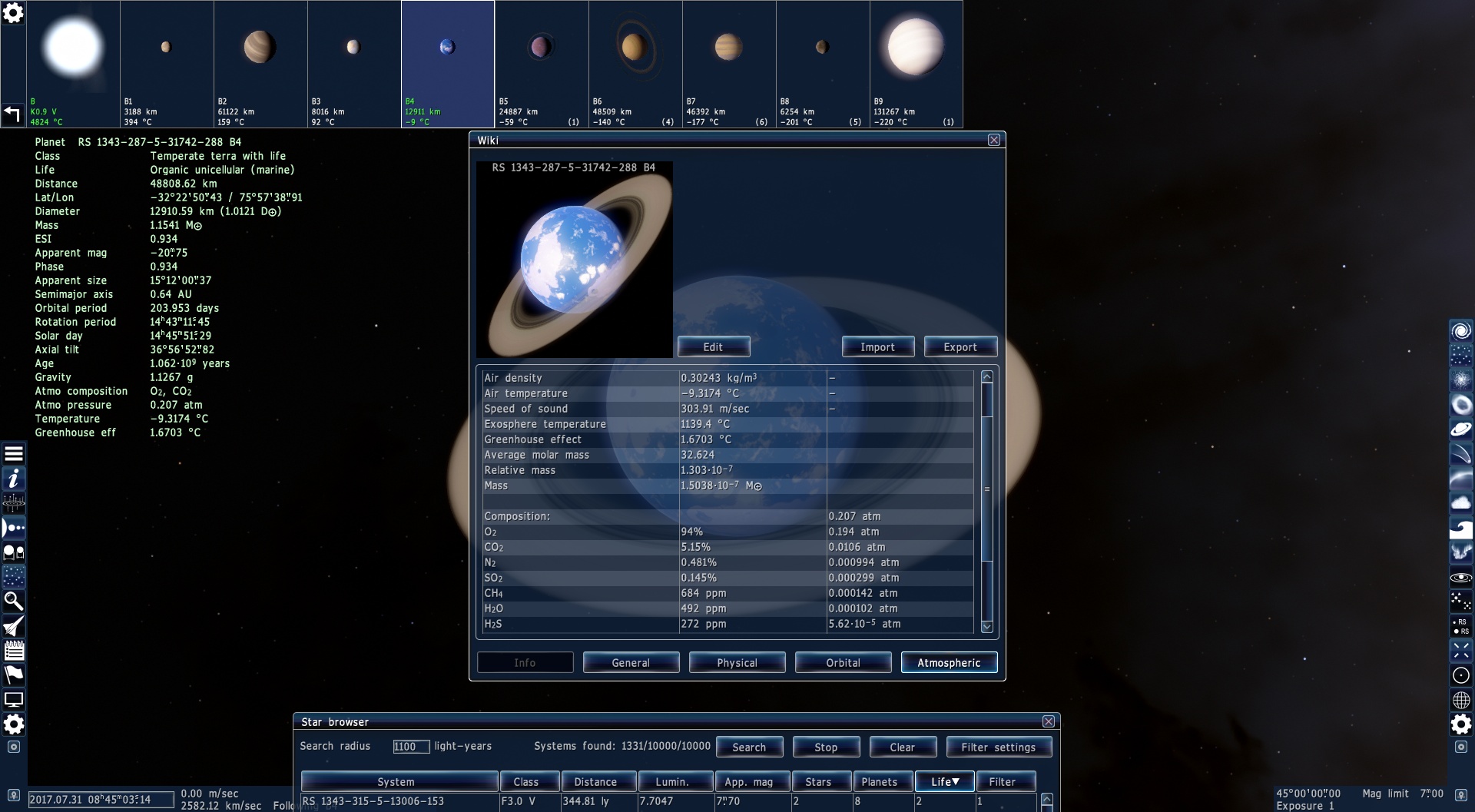 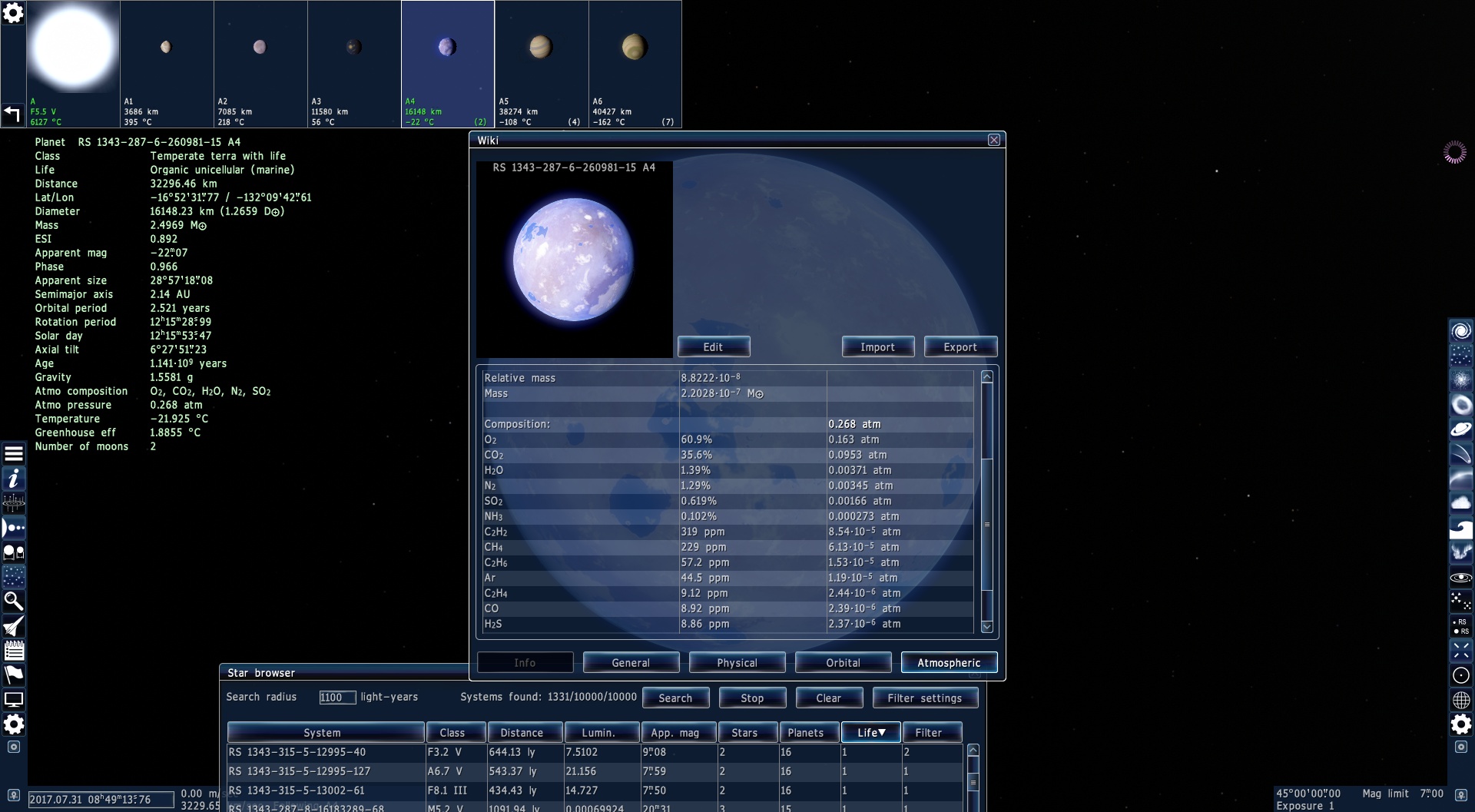 Thanks Watsisname, I knew I had something wrong. I thought maybe I mixed up partial pressures with absolute pressures, and couldn't get to sleep last night wondering what I did wrong, lol.

Yes, keep looking Starlight Glimmer. You are getting really close with most of your finds!!!

Carbon Dioxide levels up around .1 atm (10%) is what it is like living in Mexico City on a smoggy day.

Here is a map showing recent Sulfur Dioxide levels over China (and the USA for comparison). The red areas show concentrations of SO2 up to 1 Dobson Unit in strength. 1 DU is the amount of a trace gas in a vertical column through the Earth's atmosphere needed to create a layer of gas 0.01 millimeters thick at normal pressure (1013.15 hPa) and temperature 0° C (273.15 K). Which corresponds to an average atmospheric concentration of approximately one part per billion by volume (1 ppbv) or 2.6868e+16 molecules of SO2 at Standard Temp & Pressure.

That converts to about .0000001 partial pressure ATM of SO2 shown over China.
That's about 5 times less than what you can tolerate for 1 hour before you die. I think Starlight Glimmer,i think the planet before the last one in these images might be breathable.
0.194atm of O2. and only 0.01atm of CO2
"man cannot discover new oceans unless he has the courage to lose sight of the shore"
-Andre Gide
Top
Spacer

Interesting conclusion. I will keep looking and see what I can find.

Hm. But wouldn't that level of O2 be toxic because of the low pressure?
Top
Cantra
Post Reply