I was looking at this  https://en.wikipedia.org/wiki/Mars#/med ... _color.jpg  true color picture of Mars and in SE the planet is a more toned down color, more orange than red. Does anyone know how to modify the color scheme to look more like that picture?
Top
Ensabahnur

To do that, you have to modify Mars textures.
Top
SpaceEngineer

Ensabahnur, the color in that picture is not perfectly accurate. Really it's more like this: 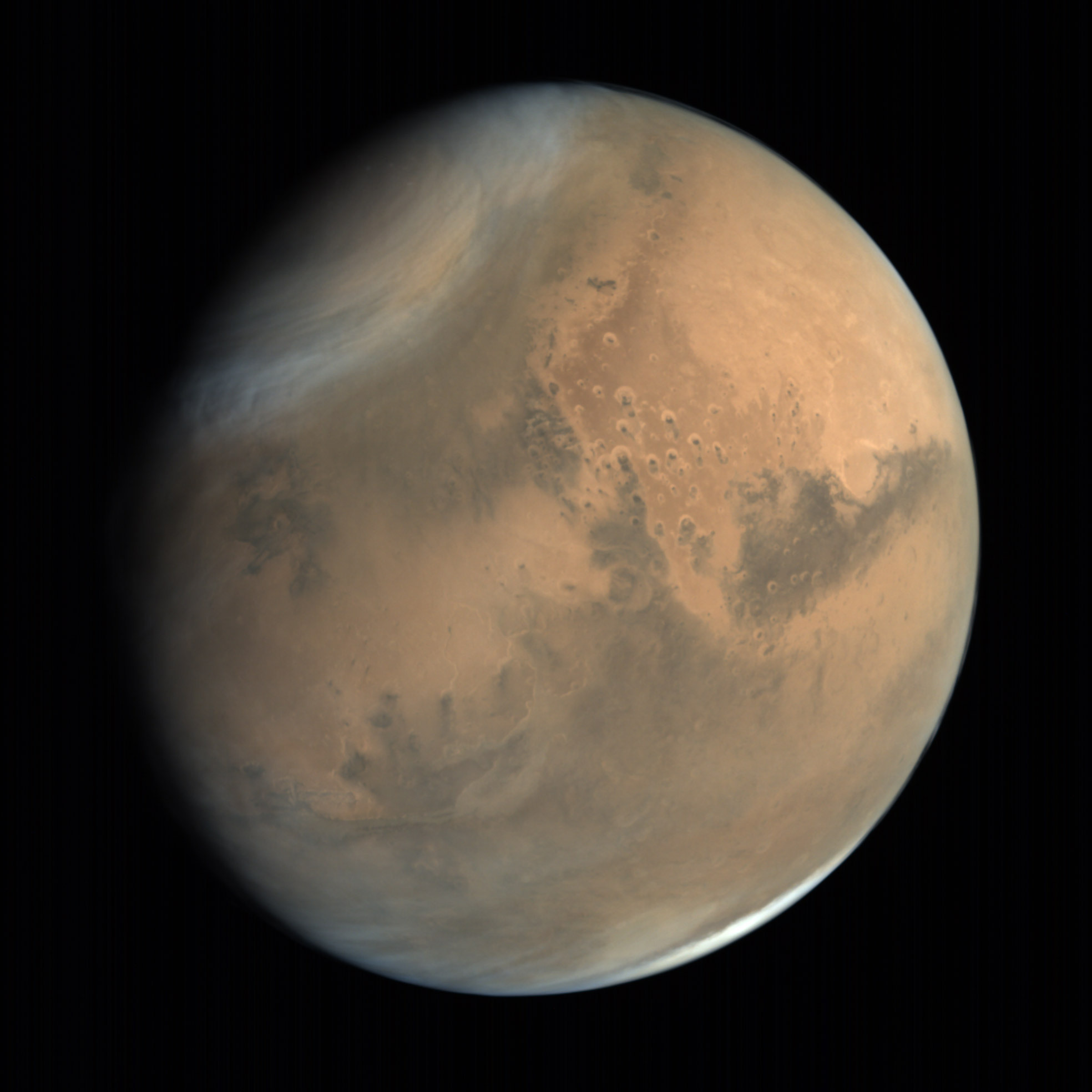 So in effect, Mars in SpaceEngine looks exactly as it does in "real life" ?
Top
Ensabahnur

Ensabahnur wrote:
Source of the post So in effect, Mars in SpaceEngine looks exactly as it does in "real life" ?

Yes, or about as close as it's possible to make it in the program currently (making Mars' atmosphere look like it does in real life is extremely difficult, because it's dominated by different types of scattering at different altitudes).
Ryzen 7 3700X, 64 GB DDR4-3200 RAM, GTX 1080 Ti 11 GB VRAM
Posts on old forum: 8717
Top
HarbingerDawn

Another thing you must take into account is the albedo of the planet. According to Space Engine, if you were to expose a camera to get an image of earth at this brightness, then moved the camera to mars without changing the exposure, this would be the effect: As you can see, Mars is much dimmer than Earth because of the distances to the sun. I do not know if this is true in real life. I will admit, it's not quite as red as the image in the original post, but not as orange as the other picture. It's worth investigating.
"Space is big. Really big. You just won't believe how vastly, hugely, mind-bogglingly big it is. I mean, you may think it's a long way down the road to the chemist, but that's just peanuts to space." - Douglas Adams
Top
Hornblower

Hornblower, albedo and illumination are irrelevant. That small difference is trivial for cameras and the human eye to adjust to. You also seem to have image saturation or vibrance increased beyond the realistic baseline, which invalidates the comparison.

But yes, on closer inspection, it does seem that Mars in SE is not quite red enough. I performed some quick adjustments and got this result: 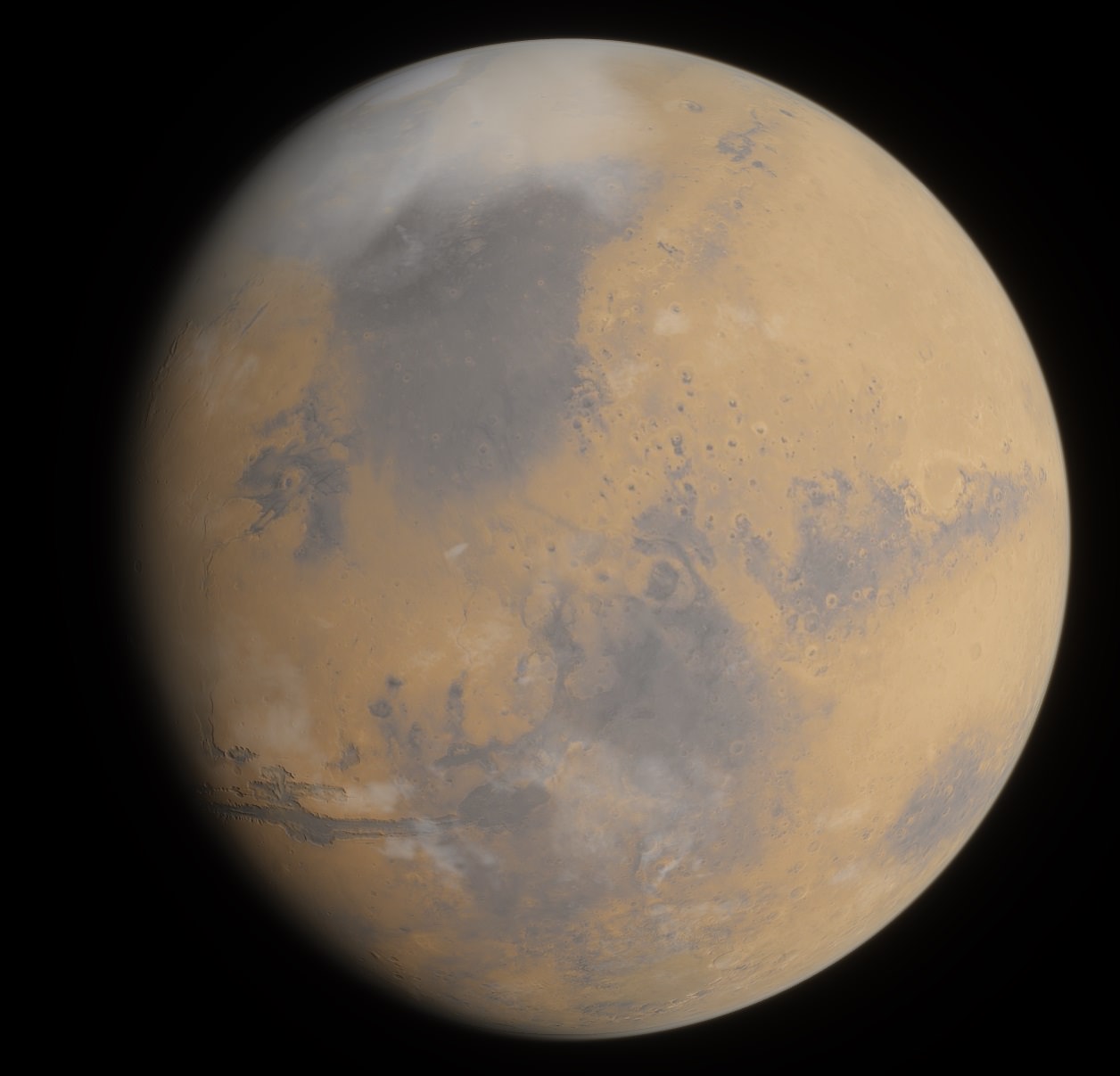 As HarbingerDawn mentions, dust particles absorb sunlight in the 0.4-0.6 µm (purple to orange) range and alsp scatter photons in all wavelengths up through 3 µm (3000 nanometers or infrared). However, the Martian sky appears more reddish to human eyeballs, than for example, those of the charge coupled device (CCD) supported by color filter wheels on the Rover Panoramic Camera, as shown in the pic. Hazy Martian Skies

Eyeballs have "rods" and "cones" with very different operating principles. Rods dominate under very low light, such as moonlight while cones dominate under bright light, such as sunlight. Rods respond to a range of shorter wavelengths, and since there is only one type, they do not yield color information like the three types of cones responding optimally to blue, green, and red. Also, because rods are rare at the focal point of the eye, low light vision is often blurry. Camera sensors do not vary in this manner.

Mars is 1.5 times as far from the sun as Earth, so solar energy per unit area at Mars is about 48% that on Earth, ignoring atmospheric effects, but still considered bright at highnoon. At Saturn, 9.5 times as far, solar brightness is roughly 1% of that at Earth orbit, comparable to the level of sunlight on a moderately cloudy day. Sometimes, you get the best color photos on days like that.

In addition to consider, your personal view is, well, unique. The brain processes data from the retina in a very complex manner, and the gradations of color can be person-specific. You'd also have on a visor if you were on the surface, hopefully. Camera photos from orbit are not taken inside an atmosphere or at highnoon either.

That was very illuminating (pun absolutely intended). Thank you.
"Space is big. Really big. You just won't believe how vastly, hugely, mind-bogglingly big it is. I mean, you may think it's a long way down the road to the chemist, but that's just peanuts to space." - Douglas Adams
Top
Hornblower

Gnargenox wrote:
Source of the post And, of course, NASA doctors all their pictures.

Except the raw ones. Regardless, images of Mars taken from orbit have come not only from NASA, but also from ESA, ISRO, and the Soviet space agency. Images from Earth showing the surface of Mars (and of course its color) have been taken by many people of many nationalities.