Hi,
If this question is in the wrong section can you point me to where I should post.

Can some one please advise why the music only plays one track and then stops. I have to manually select the player (shift>F12) to get the next track to play. I have added my own music to the list.

Also why does the selected resolution not remain selected. When I restart Space Engine it reverts to 640x480 @ 60htz

[email protected] wrote:
Source of the post Also why does the selected resolution not remain selected. When I restart Space Engine it reverts to 640x480 @ 60htz

Sometimes when I'm very near a surface of an object, esspecially an asteroid, the sun lacks flares. Also, the app sometimes randomly crashes.
Top
Wiktor120

I was playing space engine regularly (everyday) and had no issues until today I started the game up and everything was 10x brighter than before. Galaxies and stars are extremely bright, flying around a galaxy is just a blurry white screen. Galaxies just look like bright, white/blue blobs. I've checked graphics and nothing has changed and I can do nothing about it. Any help on this one? I really don't want to delete and reinstall because I have some nice places saved.
Top
Devilito

Try clicking on the default exposure and magnitude setting on the bottom right of the screen.  It's the 0 icons between the 2 + and -  icons.

It's possible that those might of got set really high somehow.
Top
vlad01

It was working 10 mins ago, now it's completely broken. SE starts on a black screen, and when I launch the planetarium (with great difficulty) everything's out of wack. Crazy exposure, messed up controls, blacked out text, and probably lots more.

This started after I tried modding in a new ship. After making my changes I deleted the cache folder and the "#" folder (I never knew what that is, but I've deleted it before and it comes back without any problems). I don't have Intel, and my drivers are up to date. I also have too many mods to count 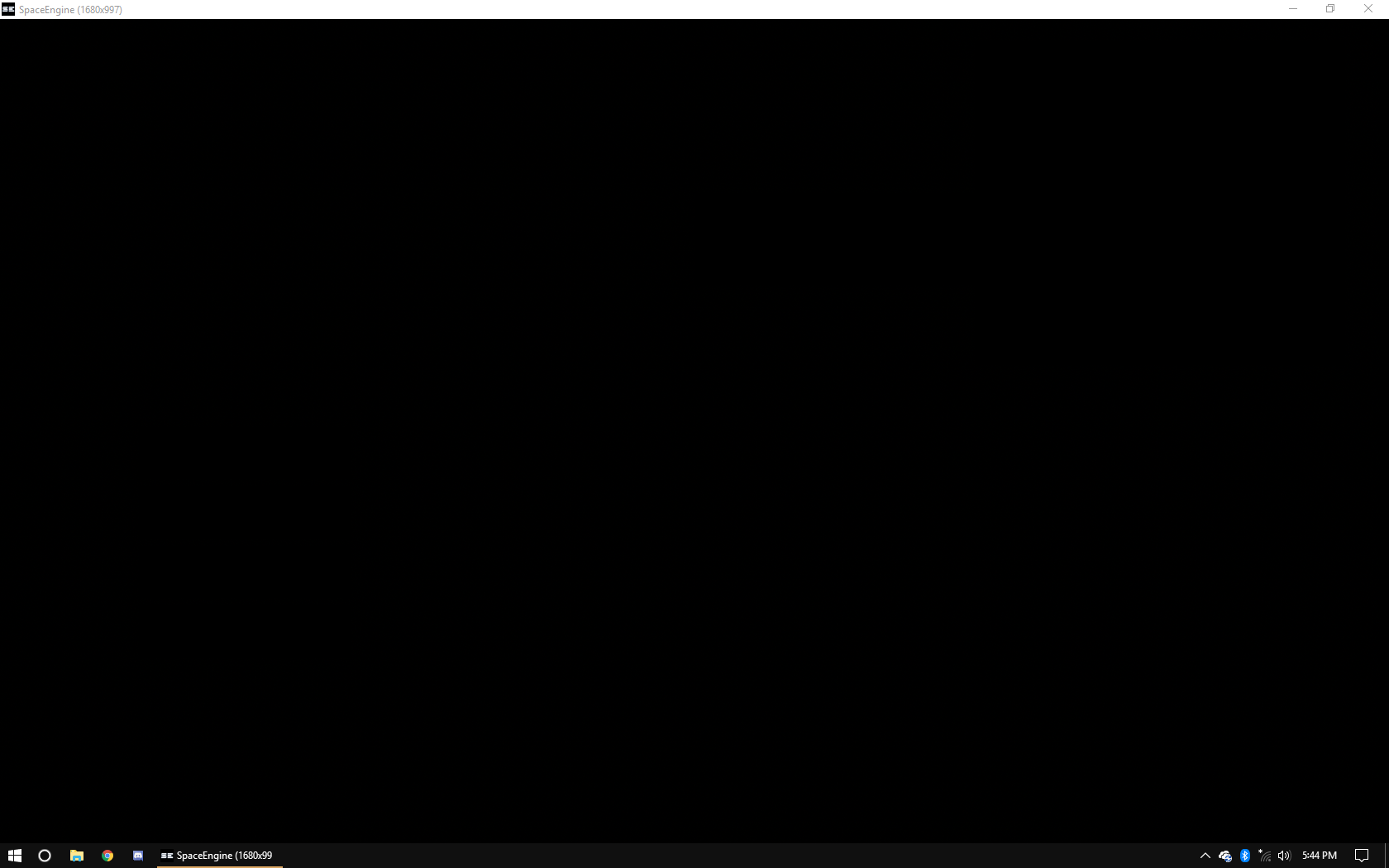 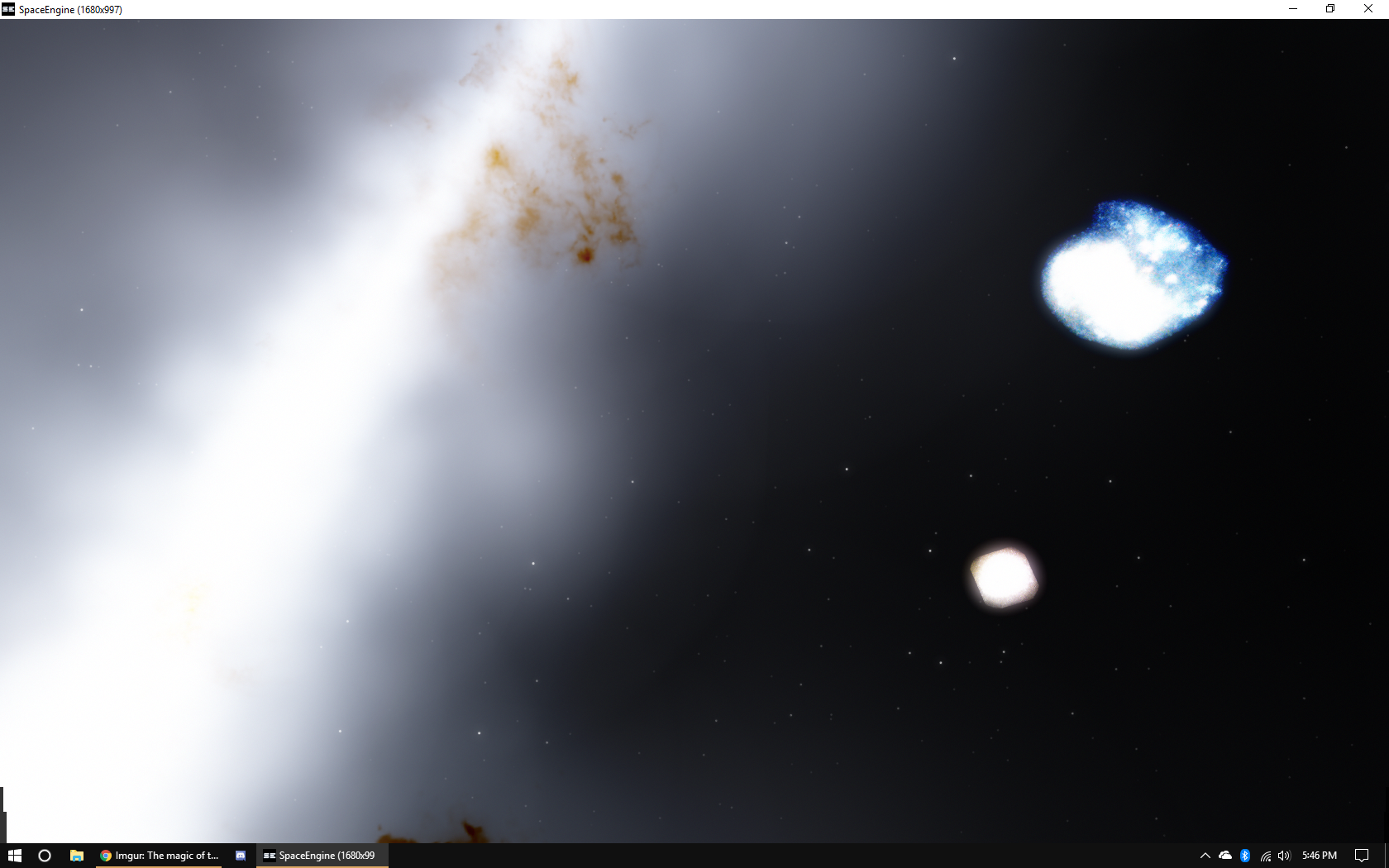 Hello Everyone;
I've just downloaded and installed Space engine 0980.
Yesterday it appeared to run fine. I don't know much about it, am still in the early familiarization phase.
Today I started it up and it appeared to run fine for about an hour. Then after doing a search for Proxima Centauri and clicking GOTO this object on the menu, it zoomed there, but then the screen went black. Now, whenever I start up Space Engine, whenever I click into the Planetarium, the screen window goes black. All the outside Windows frames and taskbars, etc still show, but everything inside Space Engine is just black, however the cursor still is present. If I mouse it over where the pop-up edge menus used to be, it changes form from the fine cross to the blue arrow still, but otherwise the entire Space Engine window is blank and black. The background music is still playing, but other than that, I cannot do anything because the window is simply black. All I can do is close the program from there, as there are no visible controls to control it by. On re-start, all the screens show until I once again go into Planetarium.
As far as I know all my drivers, etc, are up to date as that is handled automatically by my PC. I have screen shotted my ordeal and have the se.log file if I can attach it here somehow.
I am not a computer whiz.
Thanks; D

There is more, it is awfully long....
Thx; D
Top
senuaafo

I'm no expert on troubleshooting and/or graphics cards, but I do know that having comet tails on with Intel graphics chips causes no end of grief. Make sure they are turned off.

If you can't see the option to turn them off, try "ctrl-shift-C" — that is the default key to toggle them on and off. You may have to restart.

If that doesn't work... well that's all I've got, I'm sure somebody with knowledge will be along to help.
Top
Mr. Abner

PlutonianEmpire wrote:
Source of the post Since when did C drive become totally bad?

Hello space lovers,
I would like to report my annoying bug, which doest not seem to be solved yet as I have seen several questions about it on different forums .
My procedural planets are mostly flat, very far from the beautiful mountains I can see on every video or screeenshot. Even volcanoes look like small hills.
There is an existing terrain, but every altitude value seems a tenth of what it should be.

So sad I can't visit the universe like all of you...
Hope this helps,
Thanks.
Top
Wakazai

Wakazai wrote:
Source of the post There is an existing terrain, but every altitude value seems a tenth of what it should be.

Go to this position:
Code: Select all
You can either insert the code directly into the file 'places-user.cfg' (in the folder 'config') or paste it in the 'Locations' window (F6). Then everything is fine with your SpaceEngine. You just have to search a little. Not all planets have mountains and mountains are not everywhere.

Hello,
First of all would like to say this software is awesome and I have been using it happily for about year or so. Can't believe it is also free.
I like the ship models can be downloaded and I like flying those ships. But there is a problem which is following me all this time.

It happens especially near planets, during landing. At some moments, the ship engines control just behaves strange. Randomly I am unable to start or stop the main/reverse/hover. Sometimes also happened to warp drive.

It happens like this: let's say you are willing to deccelerate and you turn off your main engine with Numpad "-" key. And can't. It just stops reacting. Or, for example, you stopped your main engine and want to start reverese engine. You press SHIFT + Numpad "+". And it does not start.
The notable thing is that when it happens, you can try changing the power of 'faulty" drive by your mouse in the HUD, like clicking in the desired power level on the power bar. Then it happens to change for a single moment, but as soon as you release the mouse button, it goes back to the initial state (0 or 100%, it depends). And the ship goes on doing what it was doing.

Restarting the software helps, but it happens again soon. Changing the hotkeys in the Controls menu also helps for a while, but happens again.

I am using it under both Windows 7 and Ubuntu with Wine, it happens in both OS.
What is also important is that I used downloaded ship models (at first I used "Serenty" model from Firefly series, and thought the malfunction was a part of realistic Serenity model

haha, but it also does so with other models)

P.S. How do I attach a log file? I was honestly looking for option, but didn't get it.
Top
elldissin
Post Reply