This is system is nuts - six out of the seven satellites around this planemo are incandescent (> 700°C). How does this even happen? The main light source for the system keeps switching around as the satellites move relative to eachother! Ironically the hottest body is actually pitch black and doesn't glow at all (but does cast light).  The location is RS 1773-2742-8-333341-10 in the Arp 148 galaxy.

The primary is 6.4MJ, the system is 5.4 billion years old, the orbital eccentricities aren't that extreme (0.018, 0.024, 0.012, 0.017, 0.016, 0.160 (for the frozen moon), and 0.276 for the outer ice giant). Surely that's not enough to tidally heat all these bodies to incandescence?! The outer two satellites are highly inclined to the inner system but I don't think that should increase the heating on those. The info panel doesn't say what's causing the heating either, it just says the air temperature is ridiculously high while the exosphere temp and greenhouse temp aren't anywhere near enough to heat it that much (I think there needs to be a 'tidal heating temperature' listed too?). 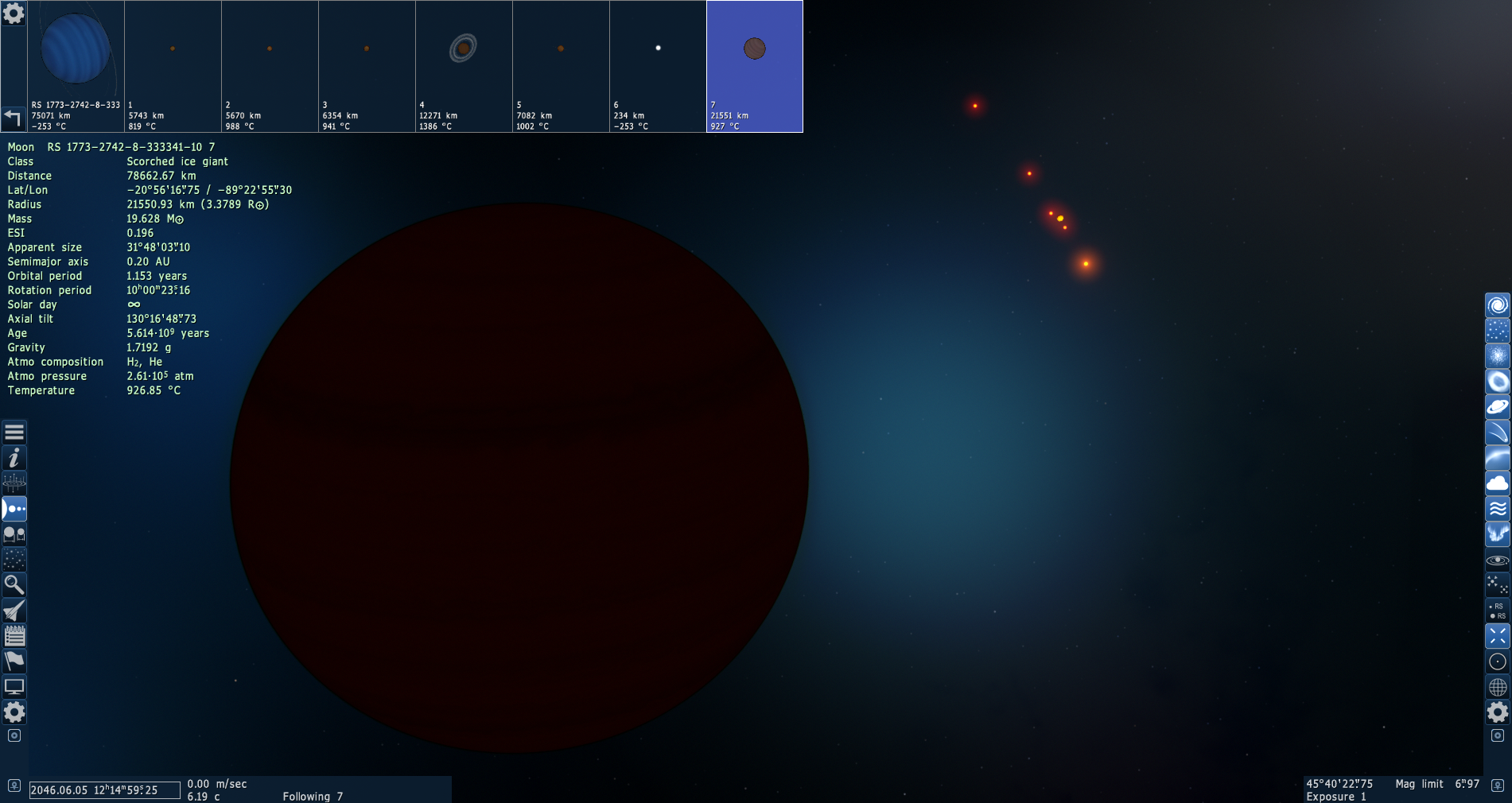 It's tidal heating. In 0.980 it sometimes goes crazy.
Top
SpaceEngineer

evildrganymede wrote:
Source of the post Ironically the hottest body is actually pitch black and doesn't glow at all (but does cast light).

This seems to be a bug worth addressing
Top
rodrigo

SpaceEngineer wrote:
It's tidal heating. In 0.980 it sometimes goes crazy.

Is it going crazy because of a bug? I've got formulae here (in my Solar System Dynamics book) to calculate tidal heating based on eccentricity, mass of bodies, orbital distance etc if they need to be checked...
Top
evildrganymede

I think it's a work in progress, which SE is in general. Back when I started with 0.972 some dwarf moons were hot enough to glow like stars.
Top
Himself

Well there's definitely a serious bug going on here! I just fired up Space Engine again tonight, I'm in the exact same system as before... but while physically the objects are the same as they were before, all of the temperatures are completely different (and more reasonable)! The system is no longer full of incandescent moons (the innermost is hot, but nowhere near as hot as it was in the screenshot at the top of the thread from last night!): 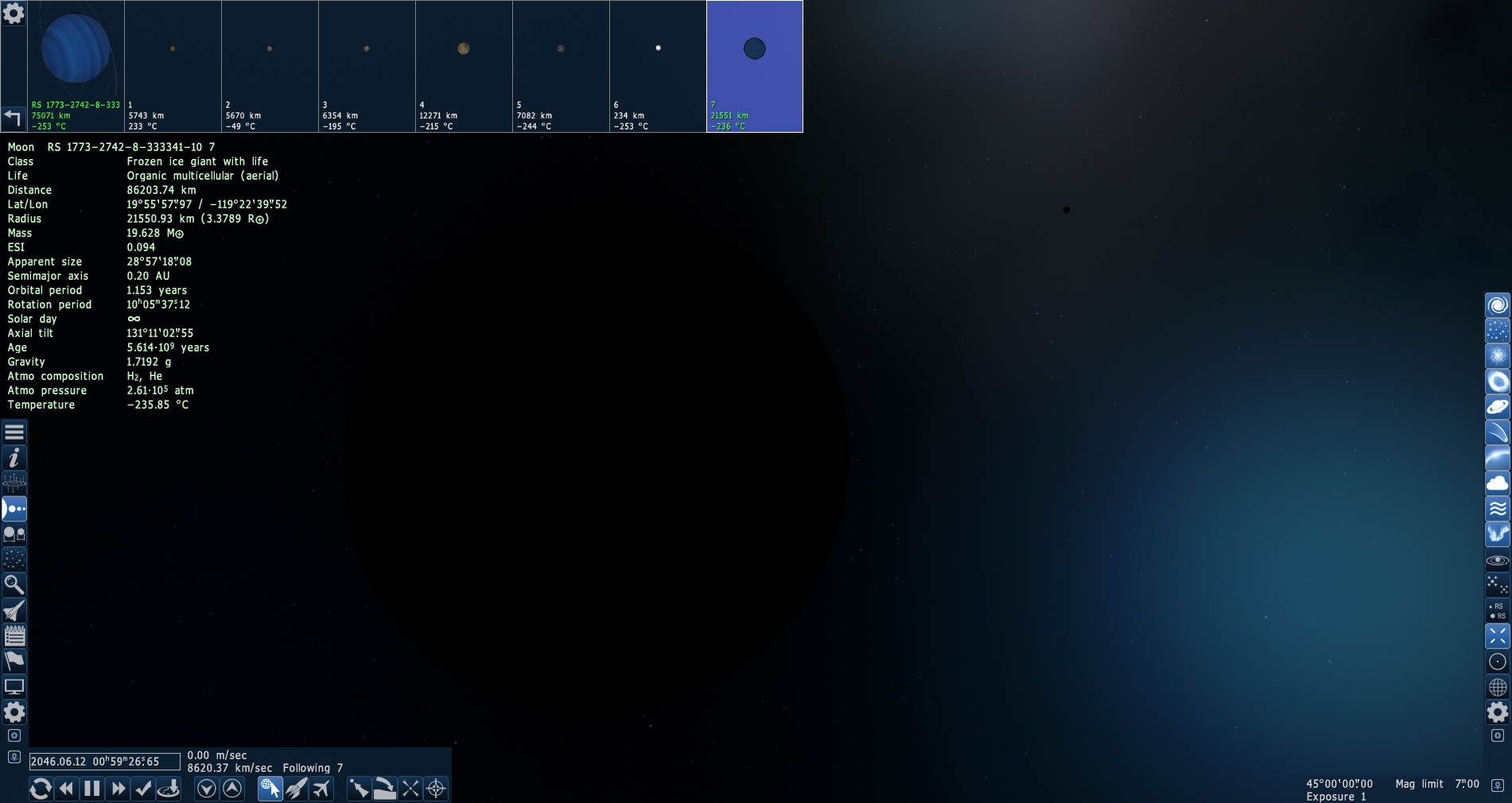 I have actually noticed strangeness like this happen a few times previously, but what would happen before is that a satellite would have an anomalously high temperature, and then SE would have a runtime error and crash (though it popped up the error message in a separate window and I could actually still continue in the game so long as I didn't click OK in the error message box). But in this particular case, it didn't crash at all.

So what the heck happened here? Did it just somehow misread the stats of the system?
Top
evildrganymede

"[font=Roboto, sans-serif]I've got formulae here (in my Solar System Dynamics book) to calculate tidal heating based on eccentricity, mass of bodies, orbital distance etc if they need to be checked[/font]"

What is the title of such a book that gives you those calculations? I may need to pick one up myself
Better known as Seth Fusion
A little generator I made - http://forum.spaceengine.org/viewtopic.php?f=3&p=27881#p27881
Top
SFGameZ64

It is actually called "Solar System Dynamics", by C.D Murray and S.F. Dermott. It's post-grad level though.
Top
evildrganymede

Pfft, who needs to be post-grad to calculate the orbital mechanics of planetary bodies? But thank you I'll look into that
Better known as Seth Fusion
A little generator I made - http://forum.spaceengine.org/viewtopic.php?f=3&p=27881#p27881
Top
SFGameZ64