by SPACE12345
Hope to join Chinese

Chinese, Korean, Japanese and other languages necessitating a different coding will need work, maybe in a future version?

by Carlosedu1
So, I thought of this while mindlessly playing SE and started to play around with the zoom feature, and it would be sick if we could actually telescope and get a clear view of obejcts as far as the M87 black hole, for instance. Though it goes pretty far as it is, It doesn't go as far as detailing Sagittarius A* from Earth, which is kind of a shame. While I'm sure this sounds like nitpicking, it would be amazing to get a scope of everything we could possibly see.

by Julian
I don't think the "brief" interface view is brief enough. In the brief interface view, I'd like the stats for the selected object in the upper left of the screen to show only the object name, class, and distance.

by TheRedstoneHive
Nebula compositions. (When nebulae are selected, it shows dust and gas compositions, like ocean and atms).

by VoyagerX
is the steam version of SpaceEngine going to have "steam achievements"? Idk if this has been discussed but in my opinion it would be quite a good move to implement some achievements that can show the people some of the features SE possesses. as i concern steam achievements usually encourage people to play a game even more than if the game doesn't have them. you could take advantage of that fact and use achievements to show the game's mechanics, graphics, precision and whatever else it will have. for example let's say you have an achievement called idk.. "how much time?". then the requirement to get it would be: "travel at the speed of light from sun to earth". in this way users would measure and prove that in fact it would take them about 8 minutes to reach the objective, thus highlighting SE scientific precision. another one that i can think of would be called "alien nightfall". the requirement to unlock would be: "contemplate a sunset in an alien terra planet". in this way users would have a beautiful view of a sunset.. environment graphics highlighted: done. of course there's a lot more you can make users do.. presence the dopler blueshift effect when looking back near a black hole, step on an asteroid to see the detailed rocky ground, view planets orbiting their star in a certain time speed, reach a nebula, a galaxy core, pluto's atmosphere, binary systems (in particular those in which a black hole is included as personal opinion), etc, etc, etc .. and all of that with the main goal of teach them SE. Additional, it will also serve as a kind of a guide for the most common people that get the software and do not know what they can do with it that is not just going around (literally).
I completely ignore the past of spaceengine in steam so i'm speaking from my particular point of view and this suggestion is based in it.

VoyagerX wrote:
Source of the post is the steam version of SpaceEngine going to have "steam achievements"?

Not at launch, but probably at some point.

by DaniGalaxy
i was thinking to add for the next update multiple types and parametres for clouds for planets:
Type terrestrial, oceanic, desertic, jovian
-With terrestrial clouds we can choose the clouds parametres (cumulus freq, cirrus freq etc..) just earth-like clouds
-With oceanic clouds the planet is in part covered by thunderstorm clouds (cumulonimbus freq, etc..)
-With desertic clouds the planet is covered by dust and water clouds (stratus frq, altostratus freq, etc..) mars-like clouds
-With jovian clouds the planet simulate jupiter's clouds, with storms, improved cyclones, and more gassy movement of clouds
Another thing would make the update better is the shadow clouds on land and reflection with other clouds...and the volumetric clouds.
this is an update idea, i hope you like it

i love SE and and I hope that in the future this program will become a masterpiece, oh wait it already is

by Julian
If you turn off the black hole gravitational lensing effect in settings, black holes look like featureless gray spheres. Why not make them black spheres? 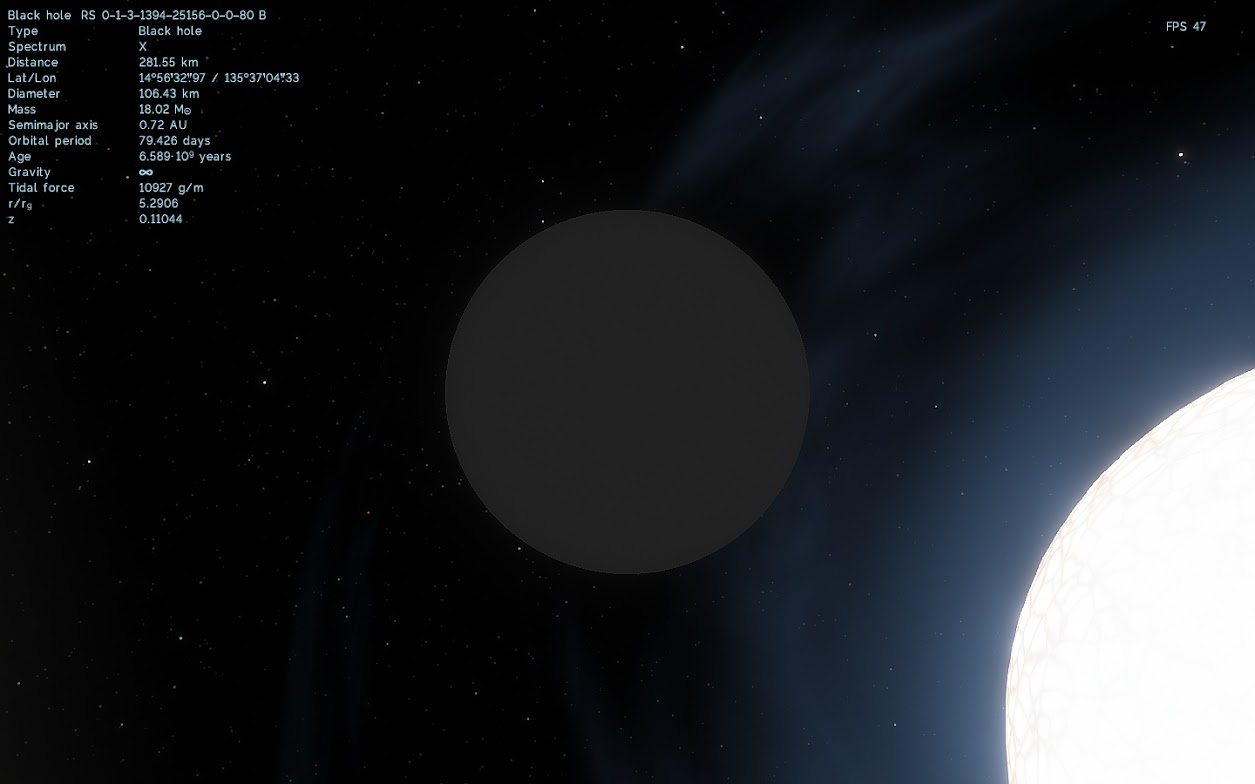 by TonioDeter
I agree, planets brightness is too high and unrealistic with auto-exposure on. Please tell us how to lower it, or at least how to enable "simple" exposure like in 0.980.
All times are UTC-07:00
Page 74 of 84
Powered by phpBB® Forum Software © phpBB Limited
https://www.phpbb.com/