What is the other program you use? I collect all sorts of space simulators.

There is Digital Universe in teamwork with Partiview

Biggest problem with that is computer power, if you are ok with 0.1fps then it's a maybe.

Actually if the goal is to see how the constellation are evolving, you will agree with me than there is maximum hundreds of stars to move (and no need to move all of them simultanuously). Moreover in the program that I give above, the movement of stars is implemented without torturing the CPU, so i'm pretty sure it could be done.
Top
michaelcretignier

Make stuff move more. There are lots of stuff that don't move but should, like clouds (i guess), continents on planets, stars in galaxies, galaxies in groups, groups in super groups and supergroups in universe.

Wiktor120 wrote:
Make stuff move more. There are lots of stuff that don't move but should, like clouds (i guess), continents on planets, stars in galaxies, galaxies in groups, groups in super groups and supergroups in universe.

All your suggestions are already planned, and the wavelength thing had already been suggested.
Top
spaceguy

i often have a hard time imagining the scale of alien planets or moons from just looking at their diameter. i think it would be a nice addition if you could spawn in an outline of earth/Jupiter/Luna/Sol/Mars that would appear next to any one celestial body to compare sizes.
Maybe it’s a little early. Maybe the time is not quite yet. But those other worlds — promising untold opportunities — beckon. Silently, they orbit the Sun, waiting -Carl Segan
Top
John Boone

Wiktor120 wrote:
Source of the post Make stuff move more. There are lots of stuff that don't move but should, like clouds (i guess)

Clouds already move, as you can see when you speed time up.

This is planned, but it is not easily implementable. Don't expect it to be implemented soon.
Space is too big to understand, so do not try to understand.
Top
Xoran

Betelgeuze wrote:
Source of the post I have a idea about white dwarf temperature surface. In the latest update 0.9.8.0 all white dwarfs have fully white surface with no colors but lens flare of white dwarf have temperature color

Is it planned to be able to record executable scripts at a fixed frame rate? I think this would be a nice way to make videos of space engine with every frame 100% loaded and high quality.
Top
kyledavide

A few suggestions of features I'd really like to see and which are not very significant changes:
-Being able to see the gravity force of a planet on the position you are (like for the atmospheric pressure or the temperature:
► Show Spoiler 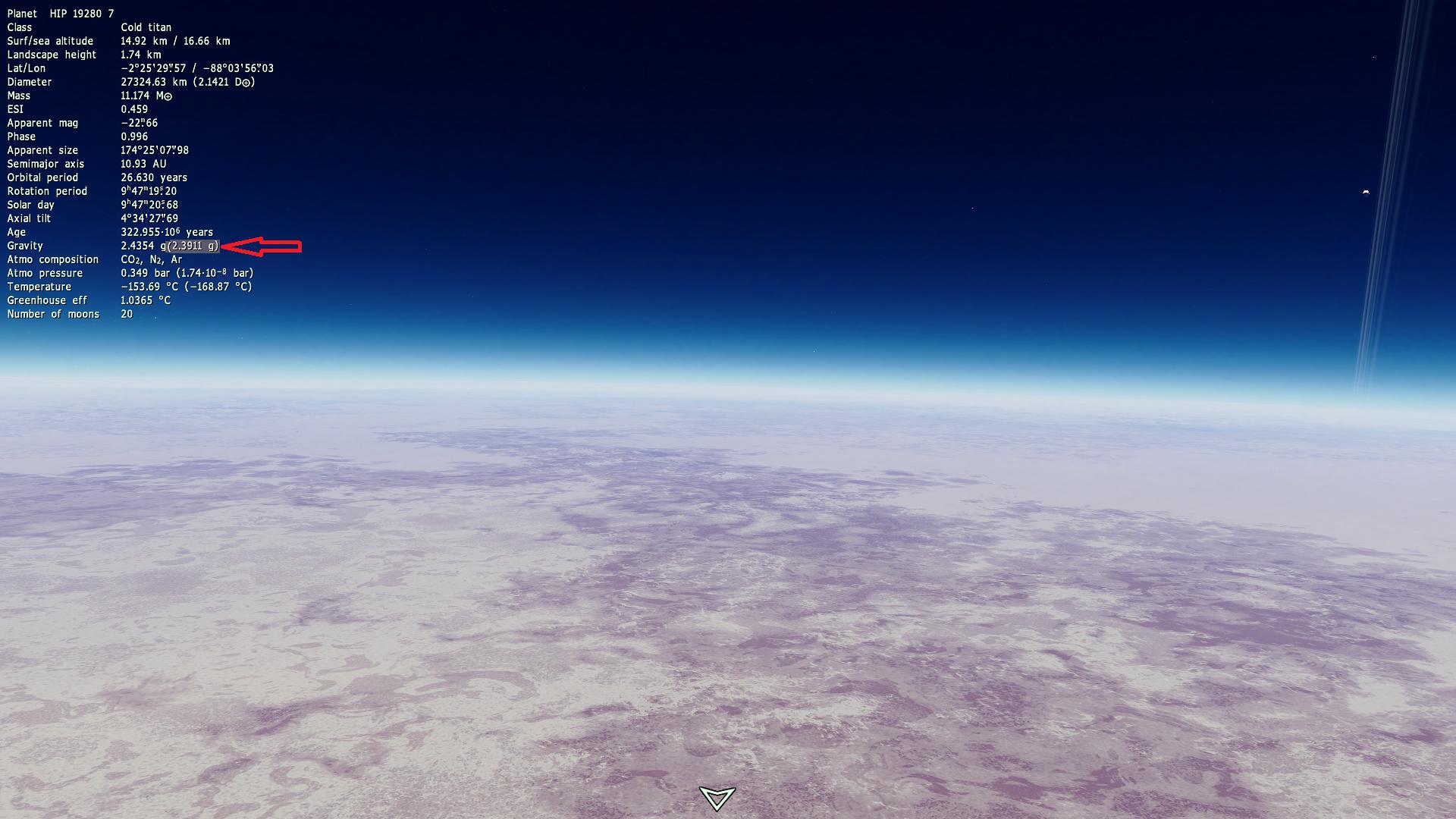 -Possibility of moons having moons since it's theoretically possible if the object is in the Hill Sphere of the moon and far enough from the planet they are orbiting. I know Elite Dangerous has this type of configuration and it looks very cool and still is realistic.

-A simple thing which has always been something a bit bothering; prograde/retrograde etc. manoeuvres are always rotating the ship in a certain position BEFORE orienting the ship in the right direction which makes the manoeuvre slower and can disorient when not looking at the ship (in orbit camera f.e.). This simple change would certainly make a difference for people using ships because it becomes quite boring after a while.

-More speed units: for ships only 3 units exist and they depend of the speed: m/s and km/s (ft/s also but doesn't depend on speed). Why not having km/h and mph as well?

-No more exponent for small numbers such as thousand for atmospheric pressure or gravity. I know this might sound silly but I find it quite inadequate to have exponents for such small numbers, I would rather prefer having thousand or millions like it's done for the amount of stars in galaxies or just a bit more zeros.

-Lastly, the biggest suggestion I have: a fuel unit (in gallons/liters) telling you how much fuel you have consumed since your ship has spawned. This could give a primitive gameplay element leading to some roleplay travels during which a certain amount must not be exceeded. To go even further, maybe being able to set this limit in-game making, as a consequence, when exceeded, engines useless.

So here's my list of suggestion after spending hundred of hours in SpaceEngine. I really think these small features (except the last one) could make a big difference even though they're not much. I don't how hard it would be to implement those features but I really hope it is possible for SpaceEngineer to include those features in upcoming versions (or even the upcoming one) since they are not much.
Last edited by Canleskis on 06 May 2017 17:58, edited 1 time in total.
Top
Canleskis

Hi Space Engineer, I love the sim/game/engine. It's an incredible programme. I feel that it could do with a 'ruler' tool, as we see on google maps for example. The ends could be fixed to any points on any objects that the user chooses, in the same way the google maps one works. This way, you could get an impression of scale more easily which I think would be very interesting on exoplanets and such. Would this be possible to add?
Top
ImperiumAssertor

Earlier, I posted a suggestion to allow map flipping for procedurally generated surfaces, and someone suggested to simply add 180 degrees to the obliquity and add a '-' sign to the rotationperiod. This is why I posted my suggested it after trying what the other guy suggested: Because my suggestion offered a way to flip the maps without having to mess up the in-game data output.

Unrealistic flight controls for spaceships because flying in SpaceEngine is annoyingly difficult.
Maybe like a switch for realistic and unrealistic.
Top
Jimbo

Jimbo wrote:
Unrealistic flight controls for spaceships because flying in SpaceEngine is annoyingly difficult.
Maybe like a switch for realistic and unrealistic.

Unrealistic is exactly what SpaceEngineer doesn't want in this project, so I don't think he'll do it.
SpaceEngine's Italian Discord server: https://discord.gg/NhQbEbC
Top
XBrain130

Technically there are unrealistic ship controls under the hidden cheat menu.

I use the UFO/Gravity/Aero commands for simple debugging and screenshots.

In the Main-user.cfg file I have this set

Realistic star ''dots'' or ''points'' are not uniformly colored, they become a brighter color near the ''core'' of the point/dot. Also, 'closer' stars tend to have coronal-like diffraction spikes visible.