by astroclu
This one is big, but probably one of the most requested and discussed in the mods and addons forum.
This is the International Space Station.
For now this is only the 3d model. No separate modules, no effective docks. Just a nice ISS you can load into SE  and make look good. I've been told that I could group all my mods in a single post but I feel not knowing what mod is in the post make it less likely to get attention.
This mod in particular is big, requested many times, and probably deserve its own thread.
If the moderators could give me their recommendation on whether having a single post or not, I'll be happy to comply. I personnally feel it is not much of a complication to open several threads for that, and that it gains in clarity, as you know what's inside the thread before you open it, avoiding to have to open many and check what's inside, to know if it's something you want or not.
Regarding how often I will add mods, well, so far NASA models keep me entertain, but when I run out of sources (mostly blender files) it will probably slow me down a lot.
I run a planetarium which is why real spacecraft is definitely my hit. 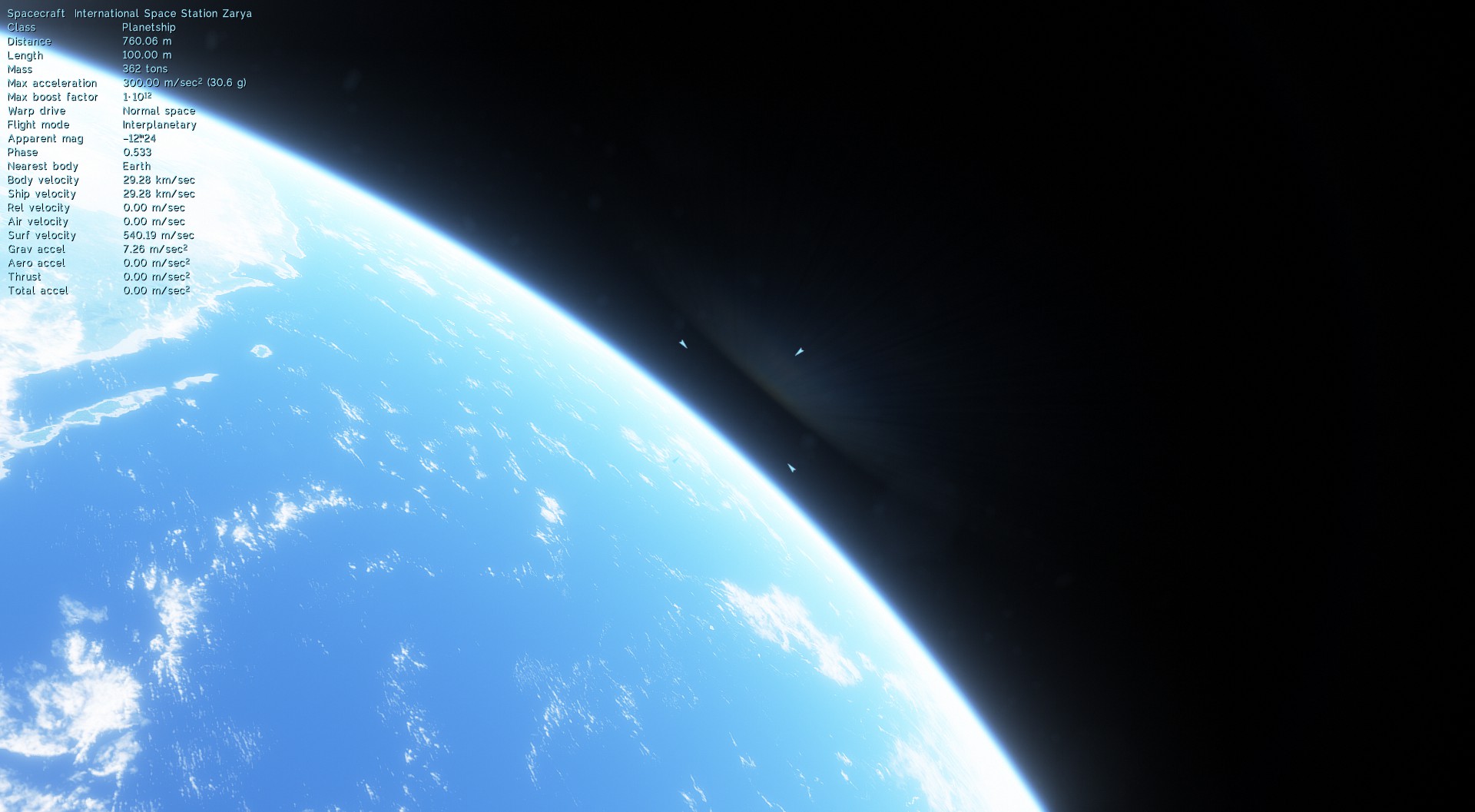 by Ensabahnur
I can confirm that, it is invisible for me too!

by astroclu
I might have packed incorrectly the files, or we may not be using the same version. I'm using .990.36.1665
I'm gonna check on my side, but could you indicate which version you're using meanwhile?

Also, I've noticed that at some angles, my ISS disappear, reapearing when at a different angle. Could you try to move around a bit, get a little further away or closer and see if something appears?

In response to schubatamann, I certainly shall explore the possibilty to make it orbi as it should (as ir real life)

Update: I've tried to use the mod on my old 0.980 version, and indeed it's not visible, making me think it is definitely version related.
If anyone with my same version could confirm they can use the mod, that would first reassure me a bit, but also give me more solid ground on fixing it for other versions.

by astroclu
My bad, I made some change in the route after the import, and even if it was stil working on my desktop computer, I tried on my laptop and it failed (invisible), and se.log pointed me to the reason being those changes I made to the routes of the files so that it would no longer point to the material file and textures, resulting in the station not being visible.
I have updated the link, so you can download and try again. I believe that since it now works on both my computers it should be working anywhere (with 0.990.36.1665, it still don't work with 0.980)

by Ensabahnur
Good job astroclu , the ISS is visible and it looks very good! Thank you for the mod !

by astroclu
Thanks for confirming it now works on your side Ensabahnur.
I still have to check if some materials and textures aren't missing, it sometimes seems a bit white to me in some parts. But the model counts theoritically more than 1300 different materials and a litlle less than 400 textures, so that will take me some time to check.
I'm still also working on the rquest of Schubatamann to find a way to put it on a fixed orbit.

by astroclu
It seems I was able to make a script to have the ISS in orbit.
The orbital parameters I used are those found here at the heavens above webpage, and are those of today July 16th 2019.
Of course, as you know these parameters tend to change slowly over time due to the fact that the earth is not a perfect and uniform solid sphere but has some local density variations and has little bumps and shallows compared to a perfect sphere, and more drastically, when in order to maintain the orbit of the ISS thrust is applied to correct its trajectory.
You can easily correct, update or completely modify those parameter if you wish in the ISS.sc file
ISS.sc
Copy this in your addons/catalogs/planets folder (or create the folder if it doesn't exist)


I also add a complete pack, including the model along with the script to add the ISS to the catalog. Find it using the search tool F3.
orbitingISS.pak


In this case you no longer have to go to flight simulator mode and build the station, you can access it through the planetarium mode and it will already be orbiting Earth as a new catalog object.
Here is a video of a complete orbit of the ISS.

by astroclu
You're right on the size, I'm not sure if that scale comes from the blender model I adapted or if I mistaked the units in the .sss file. But as you say that can be easily fixed in the editor. It looks like it is 10 times bigger than it should.

by Julian
The model is 40 times bigger than it should be. If the length of the main truss is 100 m, then if you position the camera at the end of the truss, it should be 50 m away from the center, but instead it's 2 km: 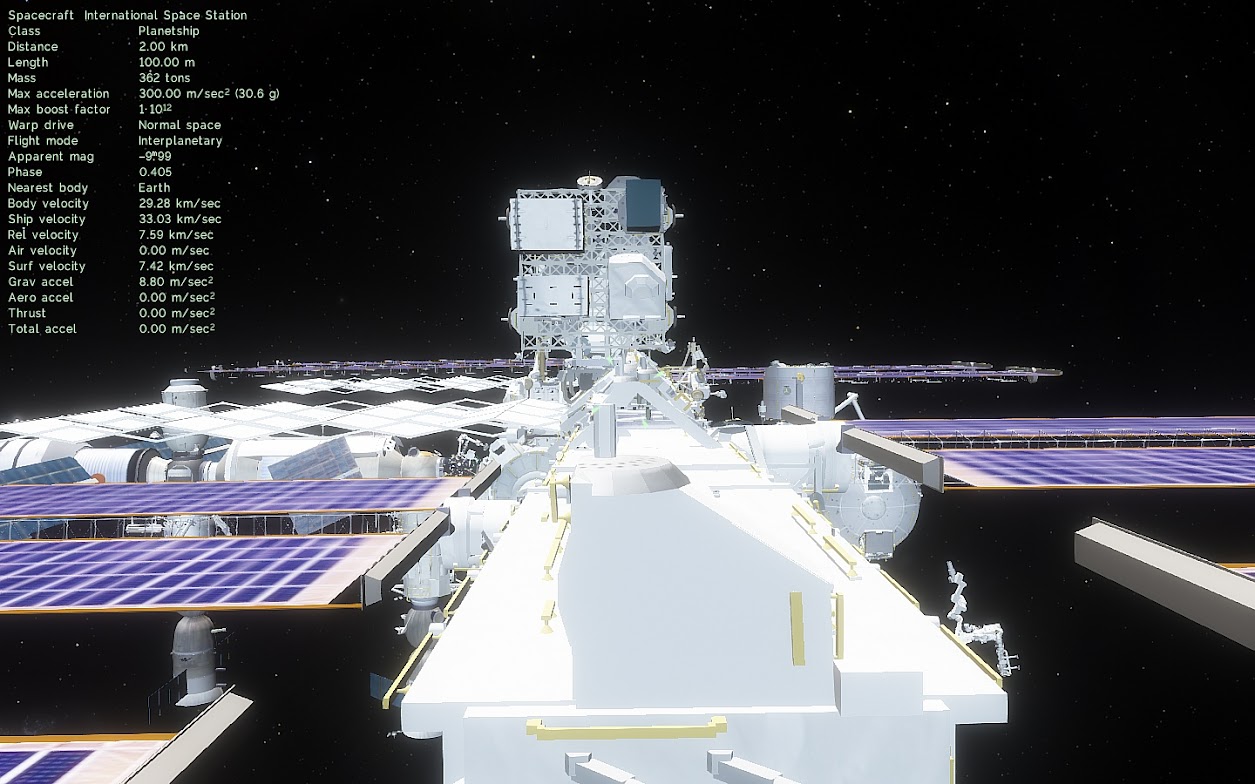 by astroclu
Thanks Julian, that the kind of thing I didn't know how to do, and needed help with. This solves many problems.

by N0B0DY
Is it possible to make a lower poly count model? This one is nice but a bit heavy hit on fps.

by astroclu
Sorry, it is not a model I did, I just imported the 3D model from NASA . I'm not that good at modelling. There's this other model which is lighter in size, but it is in lightwave format, I'm currently importing models from blender, so IF i'm importing this lighter model, it'll have to wait until I'm done with the blender models I have.
All times are UTC-08:00
Page 1 of 2
Powered by phpBB® Forum Software © phpBB Limited
https://www.phpbb.com/