I want to know how to make a good looking textures for custom nebulae and galaxies for 980.
With the amount of bizarre creatures on Earth, I doubt aliens would look like humans with skull deformations or skin conditions.
Top
Arturo100

Can't import my own spacecraft....

Hello;
Running SE 9880, been trying to import my own ships from Blender 249.
Watched a bunch of Youtube tutorials and read the webpage manual.
Followed the instructions from this site, using the .obj and .mtl files from the Blender.
Literally copied and pasted the .sss file example from the website, only changing the filenames and using the file pathway set up on my pc.
Can't make it work.

Checked the se.log and here are my references from there,
https://pastebin.com/af2X5kMm


and here is my .sss file,
https://pastebin.com/RLaK0qnB


and here is my .mtl file,
https://pastebin.com/5jjjsaby


the material file created was named shuttle-LBCshellT.mtl produced from a blender file named csp-starship2.blend
and the mtl file was placed in the directory;


Upon being run, space engine only shows a space engine category, and an unknown category when I open up the spaceship editor to try to build the ship.
There are no  .sm,  .cfg,  or  .slm  files created in either directory.

Hello;
I've been trying to import a custom ship into SE from Blender .obj and .mtl files.

I can't get it to work. I started with version 2.49, then tried again importing from my
latest Blender version 2.72 with the same results. I made the ship the simplest thing I
could, literally a cube with a single image file for a texture.

I literally copy/pasted this script from the instruction manual, only changing the names
between the quotes and the file path.

I can't troubleshoot this. What am I doing wrong?

1st image is the se.log, 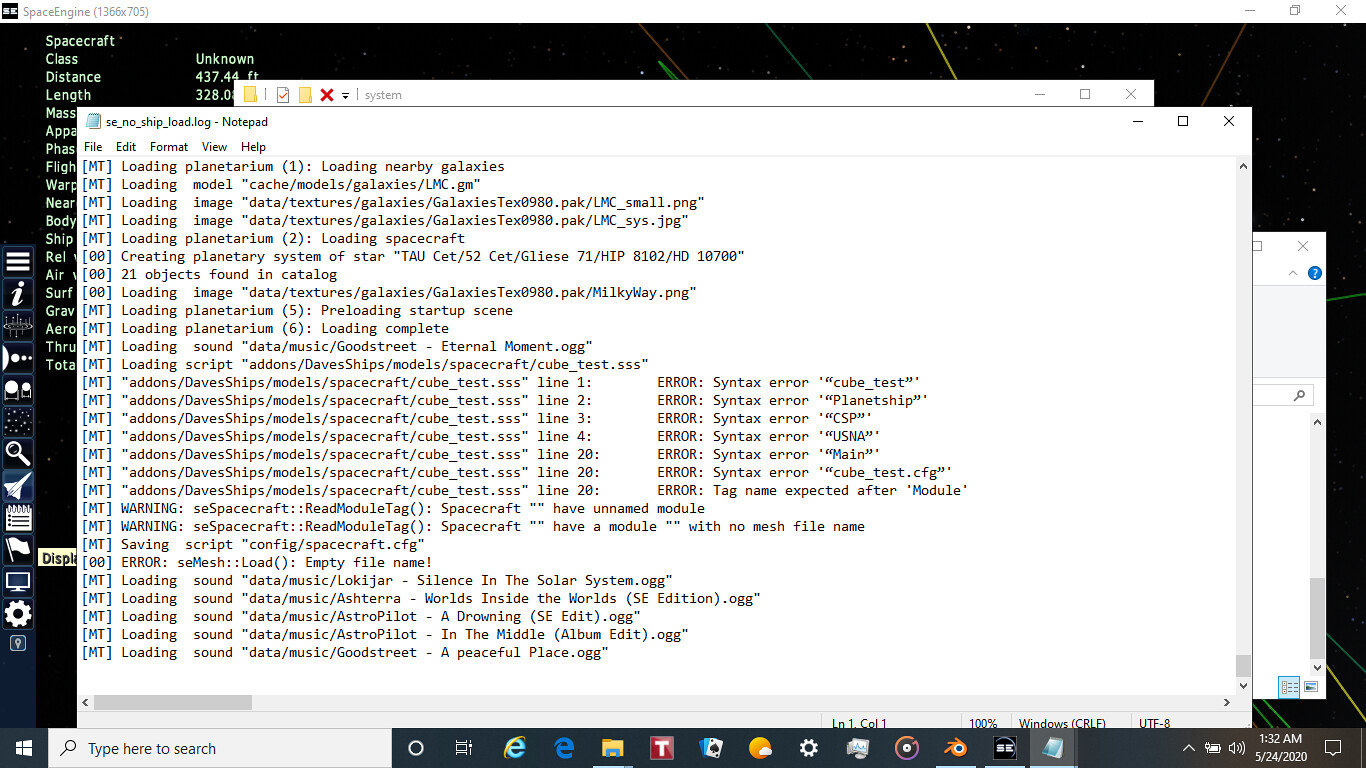 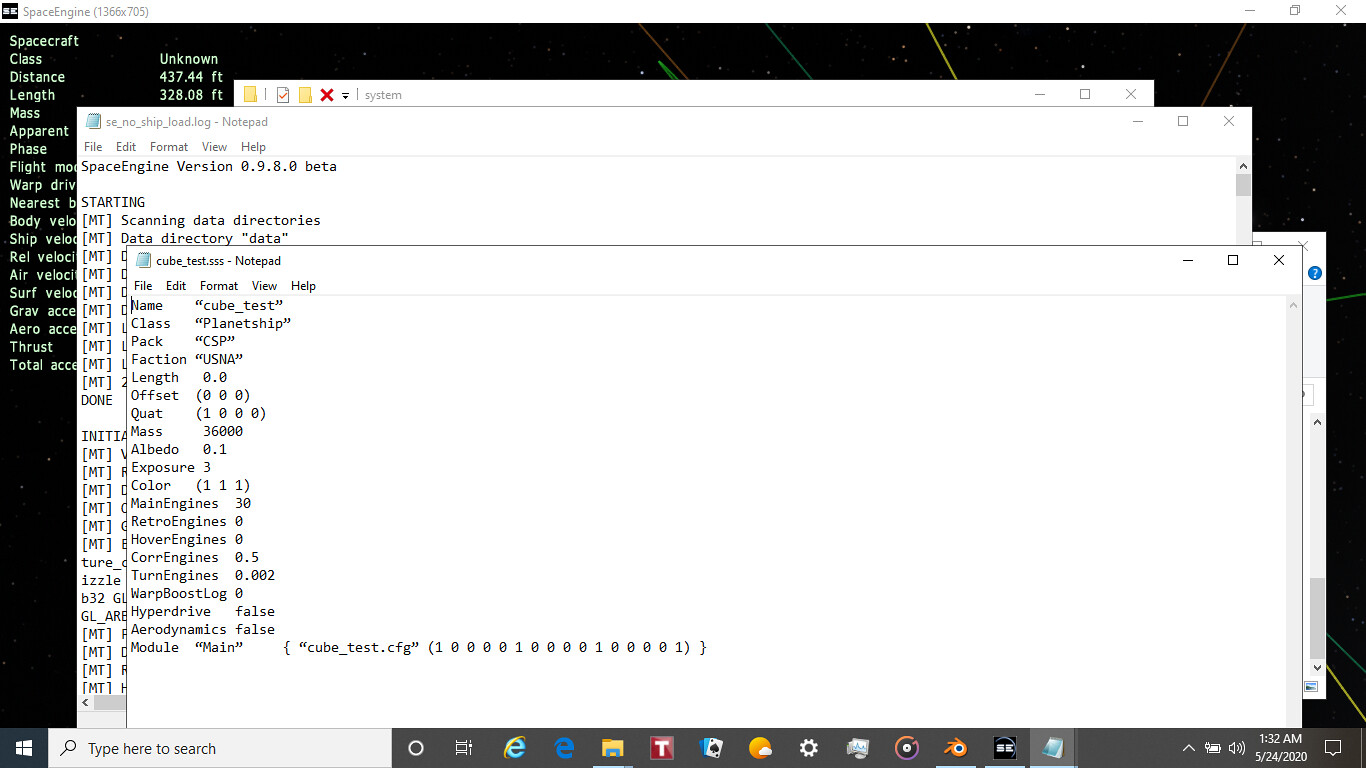 You need to change rounded quotation marks with straight ones, like this " . In the manual those are all unintentionally changed by CSS rules I guess.
"Time is illusion. Lunchtime doubly so". Douglas N. Adams
| My mods: http://forum.spaceengine.org/viewtopic.php?f=3&t=80 | My specs: Asus x555ub - cpu i5-6200u, ram 12gb, gpu nvidia geforce 940m 2gb vram |
Top
Mosfet 
Sometimes I will have it flying along in the behind view, and all of a sudden the entire ship will just disappear, like it has stopped being rendered or something....
Top
senuaafo

In addition, I got the bump map from this page:

I used paint to mount the image per image, so it was a kinda hellish to do, taking screenshot and cut the parts where are not texts and all that stuff took me like 2 or 3 entire days to get only the bump map, also I did the same with the texture, the resolution can be even but EVEN more detailed (In the case of the satellital image), but I got 8 of GB of ram and is not good enough to get a very high detailed map texture from Hawaii doing in the way I'm doing this.
How I can put this in the right way to the Earth without compromising the world map? Also there are faster ways that getting surface textures?

I know that I have to use cube map but, I don't know how to make it like Klud did with Grand Canyon.
Hello, I like lasagna.
Top
Khorrah

I will try to help. To get the final tile set, you need to follow a few steps. First find data that you can use. You said that you have a height map and a surface map, but is that what you need? You mounted screenshots, cut out the text - I think this is not the right way - you probably to take data from other places. Show me what you got as a result and examples of the data that you have.

Hello, Im new in the forum. I cant find how to post a new thread and a created thread more related with my topic. Im importing some ships of X4 Foundations game to Space Engine 0.9.9 and now i have good versions of two ships: the Argon Courier and Cerberus Vanguard. I dont want to post this on steam,  X4 is a new game... And im doing this just for fun. So, i post now some images with the ships. If i can open a new topic (i cant do this now) i think i can post the ships files itself, i dont do this now because i think very few people can see the links and i wish the members of the forum can view the links to download easyly the models. Sorry about my bad english. So, here is some screenshots:

I just forgot to say that the images are uploaded to google drive: it seems necessary to open them by right-clicking on the icons and then selecting "view image".
Top
ArgonTraveller

ArgonTraveller, there's an easier way to post screenshots here.
While writing a new post, there's a button that says "Add files". Find a file like a picture and then press Open. You should then see it at the bottom at the screen, and if you want you can press "Place Inline" and that will make pictures bigger. Just make sure the file is small enough, I think the max is 1000KB.
"I'm sure the universe is full of intelligent life. It's just been too intelligent to come here."
Arthur C. Clarke, 1996
Top
miniluv73

Thank you for the info miniluv73. In this new post, there are the images i posted yesterday, with the method you suggest me. The first 8 images are screenshots of the Argon Courier imported to Space Engine 0.9.9. The last two shows the Cerberus Vanguard. I've been busily working on adding my fictional planetary system to SE 0.990. While almost everything has gone as expected so far, SE won't load the moons for my outermost planet. It loads all the other moons for all the other planets, along with everything else in my scripts. But for some reason, this one set of 26 moons is causing problems. A dive into my most recent SE.log (attached) shows 52 parsing errors (twice the number of problematic moons) when building the planet hierarchy but gives no further information on what exactly went wrong. I have attached my compressed addons in case anyone finds any issues within them (though there shouldn't be any for the moons; I generated them with JackDole's excellent MoonMaker script, with a few modifications of my own to produce more satisfactory radius/semi-major axis distributions). If anyone does look at my generated moon script, the problematic moons begin at line 2813.

Thank you all in advance for your help.

Jadyndar wrote:
Source of the post But for some reason, this one set of 26 moons is causing problems.

To avoid such problems, I recommend giving the planets a second name (the name of the sun and a Roman numeral) and using this name for the ParentBody.
For your planet that would be "Seing VIII".
Then it works. JackDole wrote:
The name of the planet "Ķäķi" looks almost like the names in ParentBody "Ķäķi" (and like the names of the moons), but it is not the same word! Unfortunately, the difference is not visible everywhere. I had to take a picture of the two names to make the difference clear!
<snip>

I see. Looks like the left-hand version of the name uses the precomposed characters, while the right-hand one just uses K + the combining cedilla. Guess that'll teach me to copy/paste old text!

JackDole wrote:
To avoid such problems, I recommend giving the planets a second name (the name of the sun and a Roman numeral) and using this name for the ParentBody.
For your planet that would be "Seing VIII".
Then it works.
<snip>

Excellent suggestion, and one I really should have thought of. Much appreciated!
Top
Jadyndar
Post Reply