NYC has levied a different kind of penalty- now you have to quarantine for 14 days if you come from the UK and you will get a visit from the police at your stated residence to make sure you are, otherwise you will be fined 1000 a day.  And of course you must get a covid test both before you get on the plane and after you get off.

Also heard now there's yet another strain circulating and this one came to the UK from South Africa?
Top
A-L-E-X

Canada just became the latest country to detect the new UK variant in its borders. The new cases had no travel history or known contact with those who have travelled, so it has apparently been community spread there for some time. With that, it's quite safe to conclude that it is already essentially everywhere.

Why the hell are people still travelling to and from anywhere at all though? Who the hell does that in the middle of a pandemic, and to add insult to injury, who doesn't isolate themselves for 14 days at both ends anyway? I swear this is pandemic is really revealing who the sociopathic maniacs our societies are.

We could have got over this a long time ago if everyone just did the smart thing and isolated and didn't ignore orders and mandates. The reason we have these "waves" is entirely down to peoples' behaviour, not the virus (and sure, it's not everyone being stupid, but those stupid people are the ones prolonging the misery and death for the rest of us who are doing the right thing).
Top
evildrganymede

I had seen a preliminary report by the World Health Organization indicating the increased transmissibility of this strain is roughly equivalent to increasing R by up to 0.4. This new study based on the outbreak in the UK suggests it is even worse: an effective increase of between 0.4 and 0.7. That is serious. Most mitigation efforts that are in place right now would be inadequate to prevent a new round of exponential growth. Indeed, this strain has managed to become dominant in parts of the UK and lead to rapid exponential growth even despite their lockdown (such as it was).

If these derivations are correct and this new strain really blows up in the US, our most deadly month of the pandemic could be this coming February, before a significant fraction of the population is vaccinated. That's terrible to contemplate, considering we are already losing almost 3,000 lives to the virus every day.

Speaking of vaccinations, the progress in the US thus far has been predictably slower than predicted. The federal government had hoped to be able to have 10 million doses administered by the end of 2020, and as of right now we have achieved less than half of that.
Top
Watsisname

Those are some really bad news. I hope that the mortality rate is not also higher (as is been concluded for now), but still it might yield more deaths that the previous coronavirus. Hopefully the vaccines work also for this variant and hopefully the people that had the first variant gain some inmunity against this one.
Top
FastFourierTransform

Another consequence of a higher R number is that a larger fraction of the population must be either recovered or vaccinated to reach an effective herd immunity.
Top
Watsisname

Wat there seems to be some vaccine controversy here, as it has become a bureaucratic mass in distributing the vaccine.   Basically many people are now saying we should have a "first come first served" system rather than a tiered hierarchy and punishing people for distributing the vaccine on their own as the vaccine has a short self life and because of the slow roll out thousands of vials are being thrown out.

Also it looks like the US is going to try half doses of the vaccines in order to stretch them out?

A headline that feels more like something you might see in a tabloid. But this is not a tabloid, it is through the American Association for the Advancement of Science (AAAS). 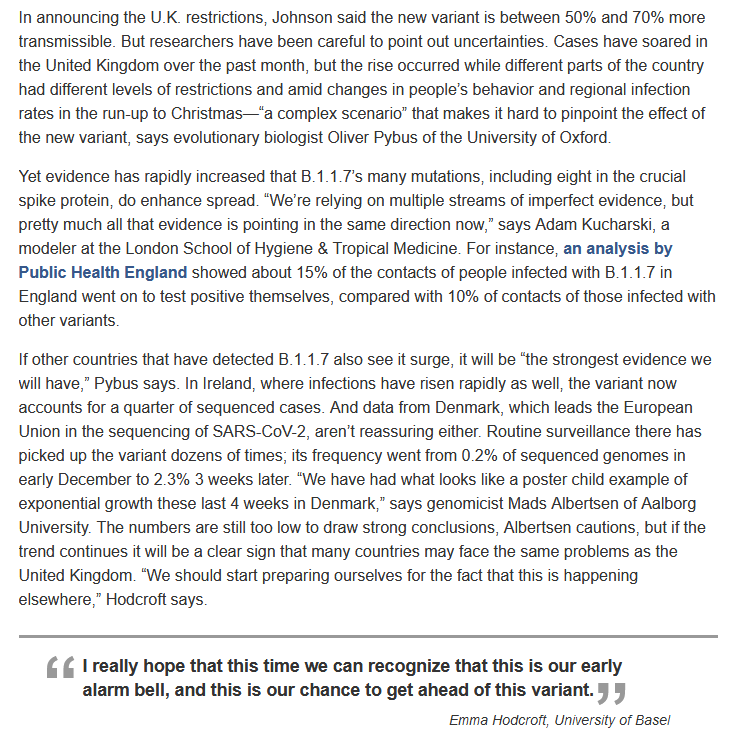 They are saying that both the UK and South African strains should both be vulnerable to the vaccine (even though the South African strain has three mutations).  But this does make it increasingly likely that we'll need a booster shot or a new vaccine every year or so.

BTW the US vaccine response has been godawful.  30% of healthcare workers are refusing the vaccine and some of the vaccine has been getting thrown out due to spoilage; if people who are eligible for the vacation refuse to take it we should just move down to next in line.
Top
A-L-E-X

WHO: Another new, more transmissible strain identified in Japan.

Wat, did you notice the change in vaccine guidelines?  They reduced the age required to get a vaccine to 65, but I also noticed they now opened it up to everyone who has pre-existing conditions and is 16 or older (includes smokers, obese people, people with kidney disease, cancer, asthma, etc.)

The main problem right now is the vaccine shortage.  We are way behind projections.  Other nations (like Israel) are doing much better.

Moderna also said that they're now working on vaccines using similar tech for AIDS and some other viral diseases.

Johnson and Johnson vaccine is due to be approved at some point later this month.
Top
A-L-E-X


Going by deaths above normal, the actual death toll is probably closer to 2.5 million. The NYtimes has also updated their deaths above normal page three days ago (though not all countries have reliable data up to then.) Another caveat is that the completeness of deaths above normal is usually very low for the most recent several weeks. In the US for example, it takes about 3 to 4 weeks for 50% of deaths to be registered, and 10 weeks to reach 80% completeness. So these curves may give the impression that current rates of death are less severe than they really are, or are declining even when they are not.

The Pandemic’s Hidden Toll: Half a Million Deaths 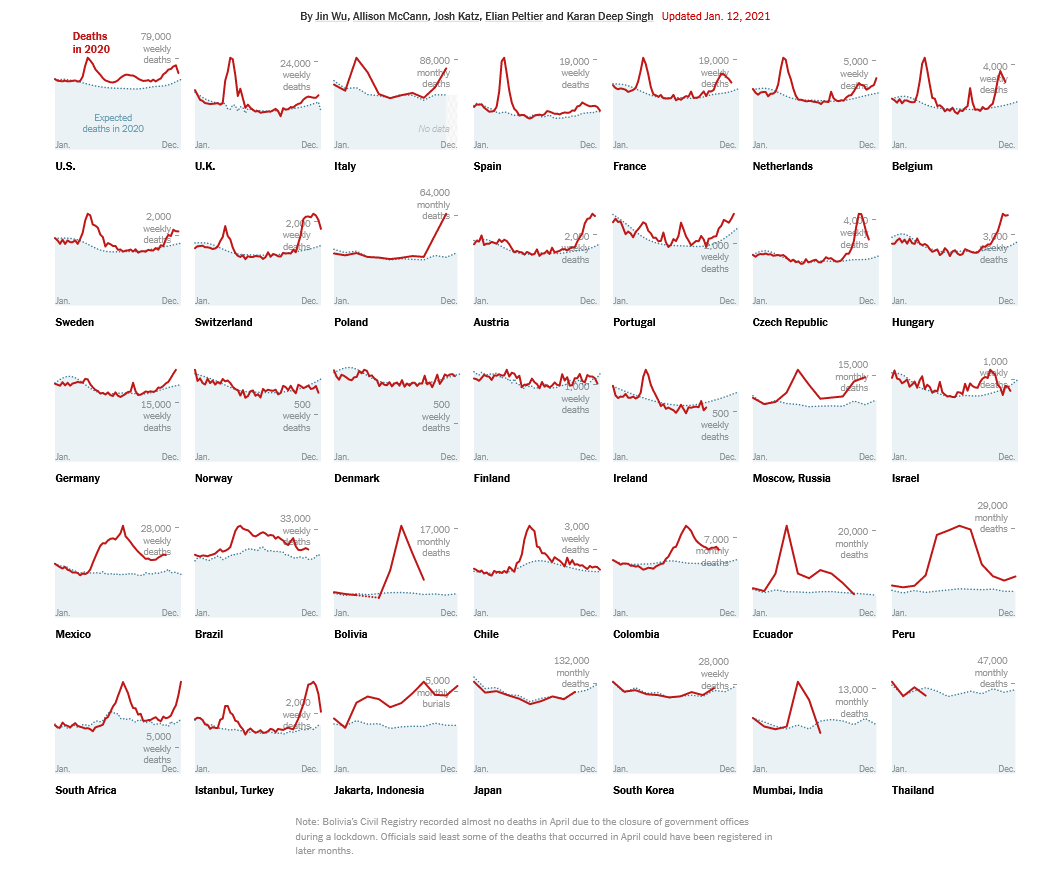 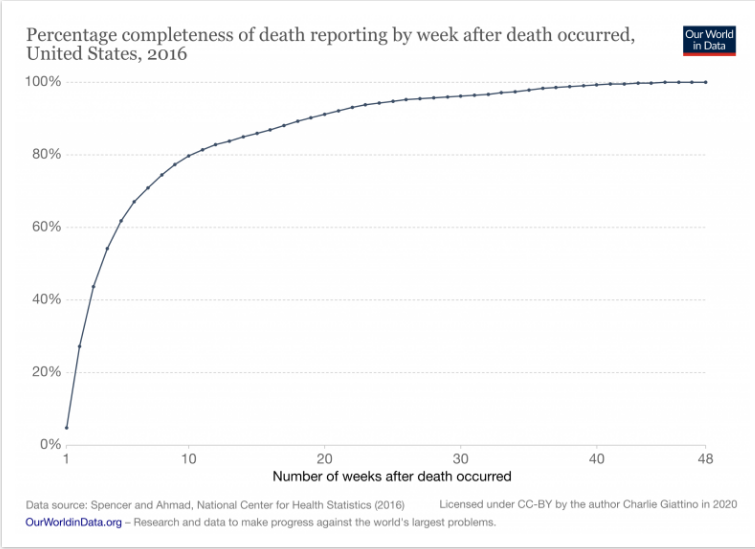 Looks like Norway, Denmark and Finland are the only countries in this list shrugging it off.  People do get infected here in Norway, and a major source seems to be people bringing covid-19 from abroad, after vacation but I think mostly by foreign workers (who to some degree have been exempted from quarantine because, uhm, they have business reasons - go figure).  Now a several thousand US soldiers are pouring into Northern Norway to exercise and apparently a few percent of them test positive upon arrival, a higher percentage amongst these people as a snapshot than for the Norwegian population since the beginning.  But apparently things haven't spiralled out of control, and the vast majority of the ill have mild symptoms.  Now more than 500 have died after tested positive, which is fewer than deaths from flu.  So far this winter there have been exactly 0 confirmed flu cases, which they say could make it difficult to develop a vaccine for next year.

It's in Norwegian and Finnish culture to practise social distancing, but somewhat less so in Denmark.  So what's Denmark's secret?  I don't think they're healthier (notorious smokers, at least used to be).
NIL DIFFICILE VOLENTI
Top
midtskogen

Wow get a load of those steep peaks in the South American nations.

Denmark has a good BMI from what I've heard, they eat healthy, have good healthcare
Top
A-L-E-X

midtskogen, I wonder how flu seasons (before 2020) in Norway, Sweden, and Denmark compare with other European countries? Maybe it can help gain some insights about normal social interactions in these countries vs. their responses to COVID-19.

A-L-E-X wrote:
Source of the post Wow get a load of those steep peaks in the South American nations.

I know, right? And not even that they are so steep, but persist at high levels for such long periods -- much of the southern hemisphere's winter. It looks like a similar trajectory for the US over our winter.

Actually, if we sum up the deaths above normal in countries like Peru (compute the area under the curve), it is roughly equal on a per capita basis to New York City last spring. The difference is New York City suffered that amount of deaths in just a few weeks, with a rate of death peaking at 650% above normal! When plotted, it's staggering. Each horizontal bar represents an additional 20% rate of death above normal. 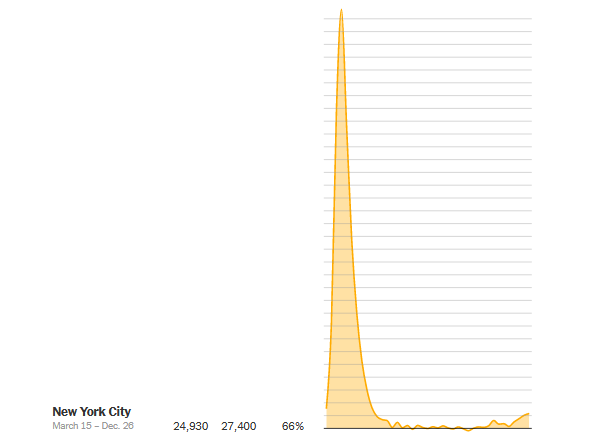 This is what happens when COVID-19 hits and catches society unaware, or when society is too slow to react. You get a massive spike of illness and death. The South American countries reacted before things got really bad, and managed to slow the spread a lot, but not enough to reverse the curve entirely. So they end up with a similar amount of death, spread over a longer period of time, which helps reduce hospital load. That's a perfect demonstration of "flatten the curve" mantra. Still, I think it's better to actually try to stomp the curve back down to more manageable levels whenever it gets out of control.

Comparing these data also helps boost confidence in understanding the true mortality rate. In New York City, the total number of official deaths is 25,909. Deaths above normal is 27,400. Out of a population of about 8.4 million, that means about 0.32% of the population has died. Yet from widespread antibody studies, we know only about 1/3 of the population has been infected. That implies an infection mortality rate close to 1%.

Now consider Peru. Peru's population is about 32.5 million, and the deaths above normal this year are 103,600, which is also about 0.32%. While we lack similar antibody studies in Peru, I still think we can be confident that less than half of the entire population has been infected, much less 100%, again implying the actual mortality rate is at least 0.5%, and maybe closer to 1%.
Top
Watsisname
Post Reply