Watsisname wrote:
Source of the post Phase 3: The young (30 and under)
Phase 4: Everyone else

Do you know the reasoning behind prioritising the young?  They are the most social age group, so if the idea is to achieve general immunity, it makes sense.  On the other side, the illness severity for this age groups seems to be similar to the seasonal flu, against which this age group generally doesn't vaccinate.
NIL DIFFICILE VOLENTI
Top
midtskogen

midtskogen wrote:
Source of the post Do you know the reasoning behind prioritising the young? They are the most social age group, so if the idea is to achieve general immunity, it makes sense.

I'm not certain of the federal government's reasoning, but if I had to guess or give my own reasoning, I think it's exactly what you said.

I think that more people aged 30-65 are able to limit their exposure by working from home, whereas we want to keep children in schools and maintain their interactions for healthy social development. Unfortunately we have seen repeatedly that schools and universities act as amplification points for the virus, and although children are at low (but nonzero) risk of severe illness, they can still transmit the virus to their parents who may be at higher risk. So by immunizing children first, it may allow schools and universities to function safely in person while also reducing risk to parents and teachers, and thus help protect two populations at once.
Top
Watsisname

Yes I am avoiding the crowds too....and actually getting most of my groceries delivered.  It is interesting that here in NY the infection rate is still around 3% even though it's so densely populated.  When I tell outsiders this they think NY has herd immunity lol.
Top
A-L-E-X

Phase 1: Emergency responders and health care workers
Phase 2a: Those with multiple high risk factors
Phase 2b: The elderly (65 and up)
Phase 3: The young (30 and under)
Phase 4: Everyone else

It looks like Phase 1 may just be a few weeks away and 20 million vaccines will be ready before New Years so Phase 1 may happen before the end of December.
As for the rest, Dr Fauci estimated that the general public may have access to the vaccine by March or April.  But a problem is that only around 40% of people said they would actually take the vaccine.  Mistrust seems to be higher among the minority communities who didn't have a proportional presence during the vaccine trials and historical misdeeds are being brought up (like the Tuskeegee Experiments.)  We need to find a way to convince more people to take the vaccine when it becomes widely available.
Top
A-L-E-X 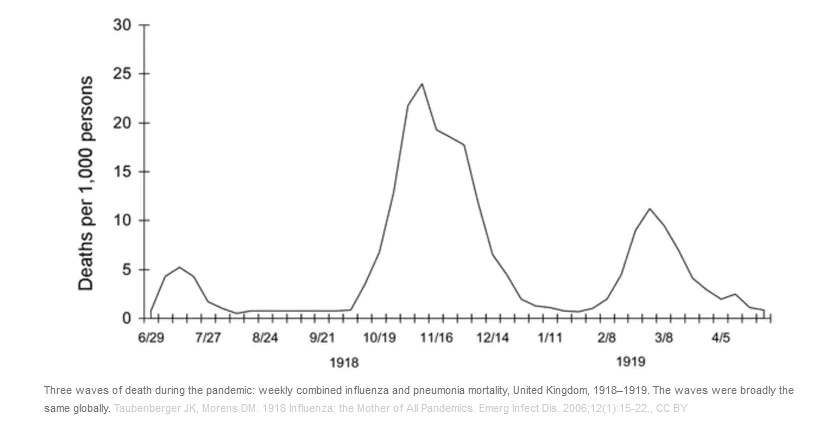 COVID-19 thus far seems to have a seasonal cycle just like 1918's H1N1, which is not terribly surprising. But it's also important to recognize that these waves are not simply due to factors outside of our control, but rather a combination of factors which include and influence human behavior. Colder weather brings more people indoors where airborne transmission becomes more significant, but the effect of different mitigation efforts is also important and can be seen when we take a more nuanced approach and compare different locations over time, which is true both in 1918 and today.

I remember reading about this comparison!  The ironic thing is San Francisco faired very poorly during the 1918 Pandemic and is doing the best in the US this time around, as far as large cities are concerned.
Top
A-L-E-X
Post Reply