I only found this site, which calculates time of travel and max speed before braking, but does so for a straight line path, as far as I understood it, and I guess trajectories can be mapped out in something like KSP or maybe Space Engine, if it supports something other than display of orbits, but they do so only for ballistic trajectories anyway, I think.

I would assume that even for an 1G acceleration and braking velocities, assuming that path from A to B being a straight line is a gross oversimplification of the real deal. So if I can do better than that, I'd like to do it.
Top
darth_biomech

This is a hard problem.  I am unaware of any tools that do this.

Computing the path and travel time for a Hohmann transfer (smallest delta-v path from one orbit to another without assists) is fairly simple, as is the path under constant acceleration and the assumption that the peak velocity is high enough to treat the path as a straight line.  What you want is in between these cases, and significantly more complicated.  You could probably write a program to do it, computing the path with the gravitation of relevant bodies plus the ship's acceleration during each time step, and then figuring out how to optimize the path for a given maximum acceleration.  (Also, with more realism, the acceleration itself would be a function of time as the ship burns through its fuel).  But if the goal is to apply it for playing around in KSP or SE, I'm a little skeptical that would be worth the effort unless you value the experience with problem solving.
Top
Watsisname

I've worked a bit on coding up a program to do this task.  I assume transfer between circular, coplanar orbits with a constant magnitude of thrust for the ship, but allow the thrust direction to change at some time (not necessarily halfway) through the journey.  I also assume gravitational attraction between all bodies (Sun, two planets, and ship).  Here's an example of going from Earth to Mars, with a constant 0.01m/s2 acceleration.  Mars starts off leading Earth by 5.42°.  At first the ship accelerates at an angle of 0° (+x direction or radially outward) from Earth's L2 Lagrange point, and then after 35.96 days the ship is rotated 190° counterclockwise, with a total burn time of 64.1 days.  The end result is to approach within 30,000km of Mars with a Mars-relative velocity of under 3km/s. 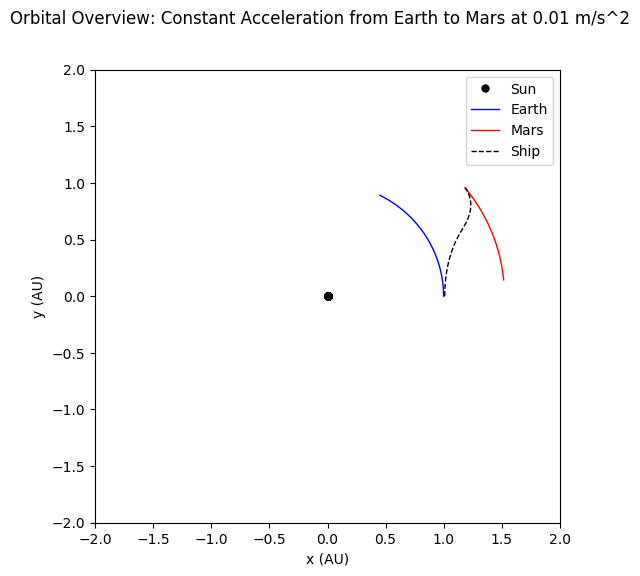 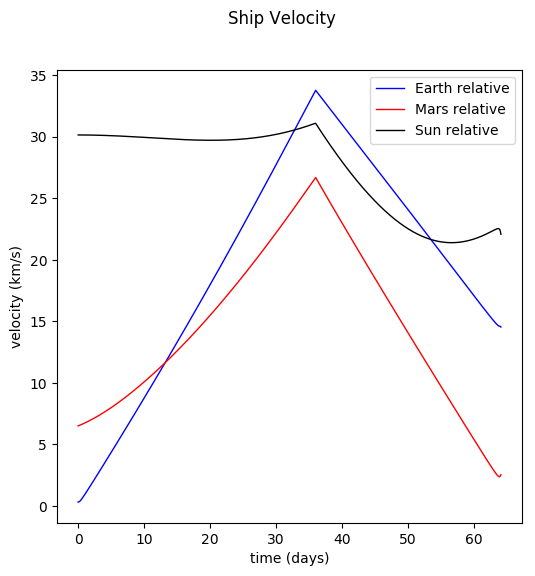 This trajectory takes more time (64 days vs. 54 days) than we would predict using the above calculator, which assumes neither gravity nor relative motion between the target and origin.  The trajectory is also probably far from optimal for this magnitude of acceleration.  To optimize it, we must see what combination of initial acceleration direction, final acceleration direction, time of turn, and total burn time will minimize the distance and time of closest approach, as well as the velocity relative to target at closest approach.  Probably the best way to do this is to program a random walker to "walk downhill", finding the location in this 4-dimensional parameter space which minimizes those output variables.
Top
Watsisname

Calculator like this will be implemented in SE one day, as a part of a flight planning tool.
Top
SpaceEngineer
Post Reply