Gnargenox wrote:
I've always loved the idea of a computer simulation program encompassing the entire Universe. I think that is the simple reason I love Space Engine.

Man I love unreal Tournament! I still play it to this day.

I used to map as well, not in UT but sort of similar game called red faction. It is also a first person shooter with similar multi player to UT but the main story line was based on mining on Mars and revolting against authority, getting back to Earth etc...

The engine is quite unique, it has a real time environmental destruction engine and some pretty neat physics.

I made a few maps based on space travel and extreme physics and it's own editor was called Red Editor.

I even figured out how to make a black hole of sorts. Not bad for a game that released 2001 and had some form of alpha dating back from 1997.

Here is a video of it.   I have managed to make rockets and grenades orbit it stable a few times haha. A sight to see for a game that does not actually have physics to do such stuff.

Watsisname wrote:
Photos from a late summer hike.  Snow cover is about at its minimum for the year, and the foliage is getting its colors.   A whisper of winter is in the air, and it will not be much longer until the storms return.

So the wildfire smoke cleared up?
Futurum Fusionem
Top
Stellarator

Stellarator wrote:
Source of the post So the wildfire smoke cleared up?

Yes, it has improved dramatically: image

midtskogen wrote:
Interesting to see how pines mark the upper limit for trees.  In Scandinavia there is a zone where dwarf birches take over where pines have to give up.

I always find it interesting how the vegetation changes as you go up in altitude.  Here the deciduous trees tend to give up in favor of pines and firs, which then become stunted, and finally give up for heather and rock and ice.  But there are some isolated areas in eastern Washington that break that pattern, where the highest species are alpine larches -- deciduous conifers whose needles turn golden and drop in the autumn.  Very beautiful trees and I'm hoping to get a chance to see them in peak color in the next couple of weeks.
Top
Watsisname

Watsisname wrote:
Source of the post I always find it interesting how the vegetation changes as you go up in altitude

I also find it interesting how vegetation changes with time.  If I had a time machine and went back in time, I would experience striking changes in the forests surrounding Oslo.  Going back 100 or 200 years, if would see much less forest, since there is less logging now, no charcoal production, and much less pasture land.  Going back another 1000 years, the trees would be different.  Today the spruce dominates, but this is fairly recent. Before that there was mostly pine and birch.  Going back another few thousand years, the forest would be more mixed, both broad-leaved trees of various kinds and conifers due to the milder climate at that time.  Also, all the rubble left behind by the ice would be more visible, since it takes time for soil to accumulate.  The coastline would be different since the sea level was much higher.  I also imagine birds being unfamiliar: probably looking much like today, but sounding different.
NIL DIFFICILE VOLENTI
Top
midtskogen

Meteorological autumn has arrived, and as I lay on the edge of an island and watched the weather roll in, I wrote a poem.  (Yes, I love poetry).  I didn't worry too much about fitting formal poetic devices, but I think it worked out nice.

I lie on winter's precipice
Surrounded by never ending waves.
A spirit of summer stands alone
A distant memory of forgotten days.
Roots twisted in crumbling stone
Armor peeling in the wind.

If you think of adding poetic devices, remember alliteration, which for some reason is often forgotten these days.  For instance, wouldn't the last sentence sound so much better as "swallowed by the surging storm"?
NIL DIFFICILE VOLENTI
Top
midtskogen

Yeah, I was thinking of alliteration (spirit of summer stands), and also used a lot of s's and soft c's, and generally getting sounds to repeat or flow together, but I didn't always hit it on the first syllable.  (Like the s in rising.)  Surging is a good one.

I think for alliteration to work, it must be on the stressed syllable.  So alliteration works well for Germanic languages which generally stress the first syllable (but English has warped quite a bit).  I don't see modern authors use that much, though.  Tolkien may have used it to some degree modelled on old poems, but the metre is likely more important.
► Show Spoiler
NIL DIFFICILE VOLENTI
Top
midtskogen 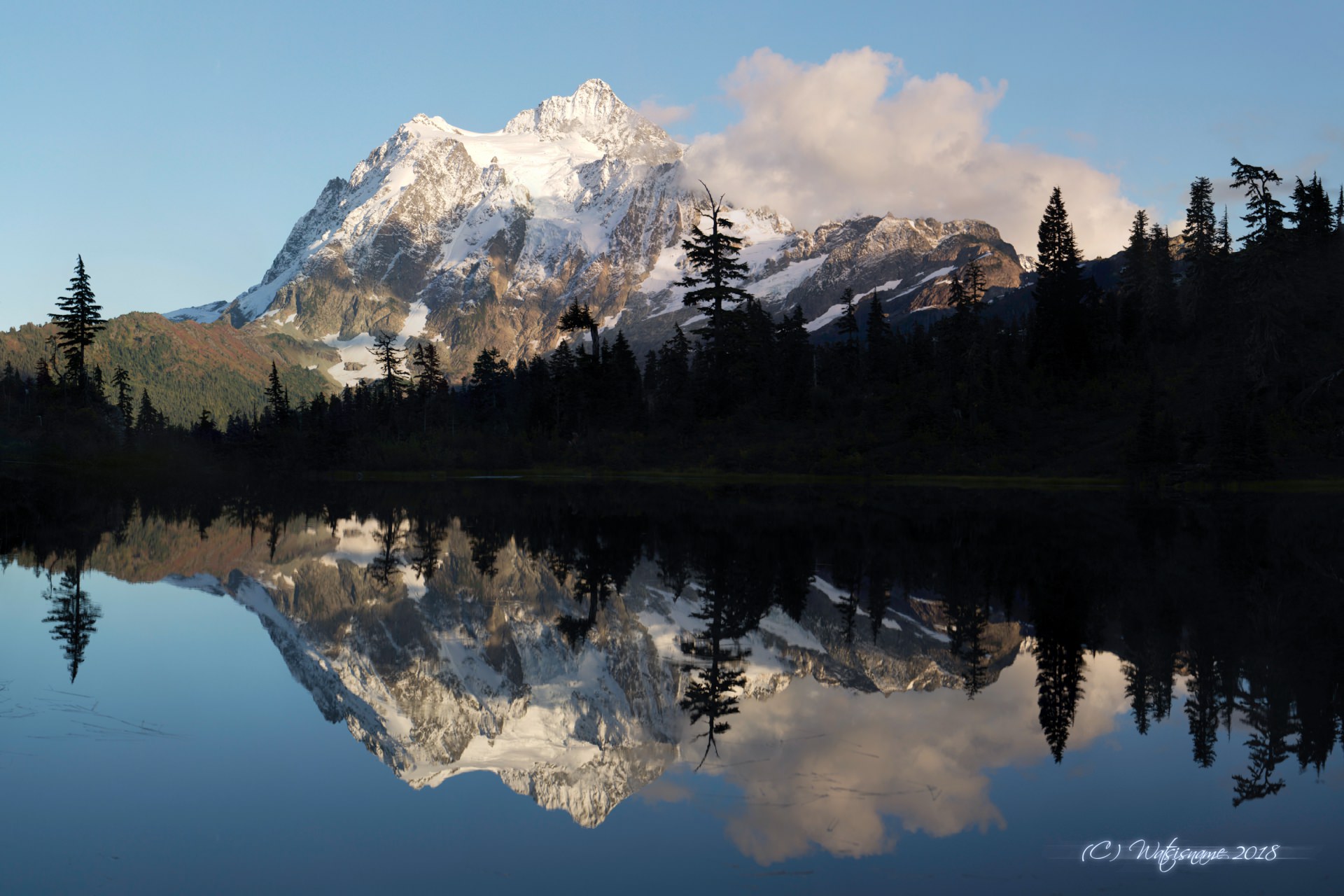 I hope someday we can see such reflections in SpaceEngine!

Verrrry nice! I can almost feel the cold

I hope someday we can see such reflections in SpaceEngine!

I hope someday we can see such *trees* in SpaceEngine!

I've been having extraordinary luck with these alpine lakes lately...   This is Blue Lake in Washington, 1915m ASL, which I visited today to see the larches changing color.

I'll have some photos of the trees to share as well after while.

I've been to Blue Lake

. It was raining that day, but as beautiful as ever.
Futurum Fusionem
Top
Stellarator

That's awesome!  Yes, it can be hard to find a sunny day there (I guess they didn't call it Rainy Pass for nothing), depending on the time of year, but it's beautiful in any weather.
Top
Watsisname
Post Reply