DoctorOfSpace wrote:
MineCrafter473, drama much?  Because the US repealed some random act regarding the internet that makes it the worst country in the entire world?  How much more of a child can you be when you consider this to be the determining factor on a country being bad?  There are far worse countries and far worse things going on in the world.

In other news The Last Jedi was not a good movie

Well to be fair countries like Denmark are rated as quite a bit better by most metrics.  The US has way too many nationalistic religious people....
Top
A-L-E-X

Gnargenox wrote:
Source of the post I wonder what anti-matter's shelf life is? Does it decay at the same rate as normal matter?

Theoretically an antimatter particle should have the same decay timescale as its matter particle partner.  For example, a positron is the antiparticle of an electron, which as far as we know never decays.  In practice, its shelf life depends on the container -- on how well you can confine it and prevent it from annihilating with matter.

Gnargenox wrote:
Source of the post Is the reason the universe is asymmetrical is because it all fused into Dark Matter?

No.  The annihilation of matter and antimatter shortly after the Big Bang is responsible for releasing an enormous amount of energy in the form of photons, which made the universe radiation dominated.  If instead all the antimatter somehow converted to dark matter, then this source of energy would have been removed -- sequestered in the dark matter.  The universe would have evolved very differently.  It would have skipped the radiation-dominated phase and gone directly to matter-dominated.

The reason the universe has an asymmetry between matter and antimatter is thought to instead be a result of small violations of conservation laws in the generation of matter and antimatter (e.g. out of vacuum fields [pair production], or by the decay of other particles), after the Big Bang.  If there is a very slight difference in the amount of antimatter vs. matter generated, then a great deal of annihilation will still occur, but leave behind some amount of matter that we observe today.  (Or for all we know it was the antimatter that won out and we are antimatter creatures calling matter antimatter -- the physics works out the same).

Maybe some of the annihilation does generate dark matter particles.  But the standard model of particle physics makes no predictions for how that would occur, and as of yet there is no consensus model for precisely why this asymmetry should occur.  This is one of the significant unsolved problems in physics.

It's possible there is no assymetry at all- maybe there are equal numbers of universes and antiverses, with opposite arrows of time (one expanding while the other contracts and vice versa) and made of dimensions that are complementary to the other.
Top
A-L-E-X

So has anyone pre-ordered the Boring Company Flamethrower yet?
"Space is big. Really big. You just won't believe how vastly, hugely, mind-bogglingly big it is. I mean, you may think it's a long way down the road to the chemist, but that's just peanuts to space." - Douglas Adams
Top
Hornblower

In other world news this morning, I knocked over a tall glass of cold coffee onto my laptop keyboard. I had time to unplug the cord but not enough time to shut down before hearing the sound a paper clip makes when you snap it in half and then the screen went black. I'm on my 16th hour of Space Engine withdrawal. Even a box of chocolates doesn't help.
CPU: AMD FX-8350 8 core processor 4GHz / GPU: GeForce GT 730 @ 1920x1080, 60Hz with 1GB adapter RAM / RAM: Patriot Signature 4GB 1600MHz 240-Pin DDR3 (only 2GB work, don't buy it) / Motherboard: MSI 970 Gaming MS-7693
Top
Gnargenox

Gnargenox, this is dispatch.  Your distress call has been received and care packages are en route.
Top
Watsisname

This winter is the most snowy in several years in Oslo.  Between 1 and 1.5 meters of snow some places.  We get that amount of snow perhaps a couple of times per decade, but then it's usually in March and now it's only 1 February. I shovelled the roof of my house this evening.  My wife took this image of me leveling out the snowpile in front of the house - taken through the window of the second floor.  We had similar amounts of snow in 2011 and 2006, but that was later in the winter. Whatever planet you are on midtskogen, it looks too cold for life to exist! You're a brave man, and your wife is just as too.

I was screwing around again with planet textures on a different software program until I can fix my computer tomorrow.
I can't believe how much I miss using Space Engine! Gnargenox wrote:
Whatever planet you are on midtskogen, it looks too cold for life to exist! You're a brave man, and your wife is just as too.

I was screwing around again with planet textures on a different software program until I can fix my computer tomorrow.
I can't believe how much I miss using Space Engine!

Please keep me in mind when you post or come up with new planet textures. Especially for our solar system. Looks good.
Top
tornadotodd

midtskogen, ohhh wow!! that a lot of snow!
meanwhile here we may break the temperature record for february. it will be 25c next week!
"man cannot discover new oceans unless he has the courage to lose sight of the shore"
-Andre Gide
Top
Spacer

Finally some good weather tonight in Oslo.  -12C, 130cm of snow and 93% Moon.  Very nice to ski away from the streetlights. A-L-E-X wrote:
Source of the post It's possible there is no assymetry at all- maybe there are equal numbers of universes and antiverses, with opposite arrows of time (one expanding while the other contracts and vice versa) and made of dimensions that are complementary to the other.

That is what I am suspecting... However I don't think you need more than just a negative direction in time. For me, treating the entire universe like a Feynman diagram would say that an antimatter universe should propagate in a negative time direction. But that does create a question, would this antiverse be apart or part of our universe? Being that does it represent a violation in energy conservation or its solution, or does it represent a non-closed energy system. It would make sense... I don't know though.

My "Theory" (Not really a theory, just an educated guess):
► Show Spoiler
Matter is a function in time. The direction in time is causality. There are two sub-types of causality: direction and orientation. Direction is like the flow of entropy, Orientation is like the charge of a particle. Antimatter in our universe, now, experiences entropy forwards because its direction is forwards, but it "faces" backwards. Like as if you were walking backwards. But antimatter in an antiverse has a negative time direction and orientation, it would look like matter there. But as a Feynman diagram shows, the orientation and direction are the same thing, just interpreted differently based on perspective. There is only 1 causality but it looks like 2. This is as much I can "guess" into, and I am not saying thats how it is, just what I think it looks like.
To reality, through nothing, from un-everything.
Top
Terran 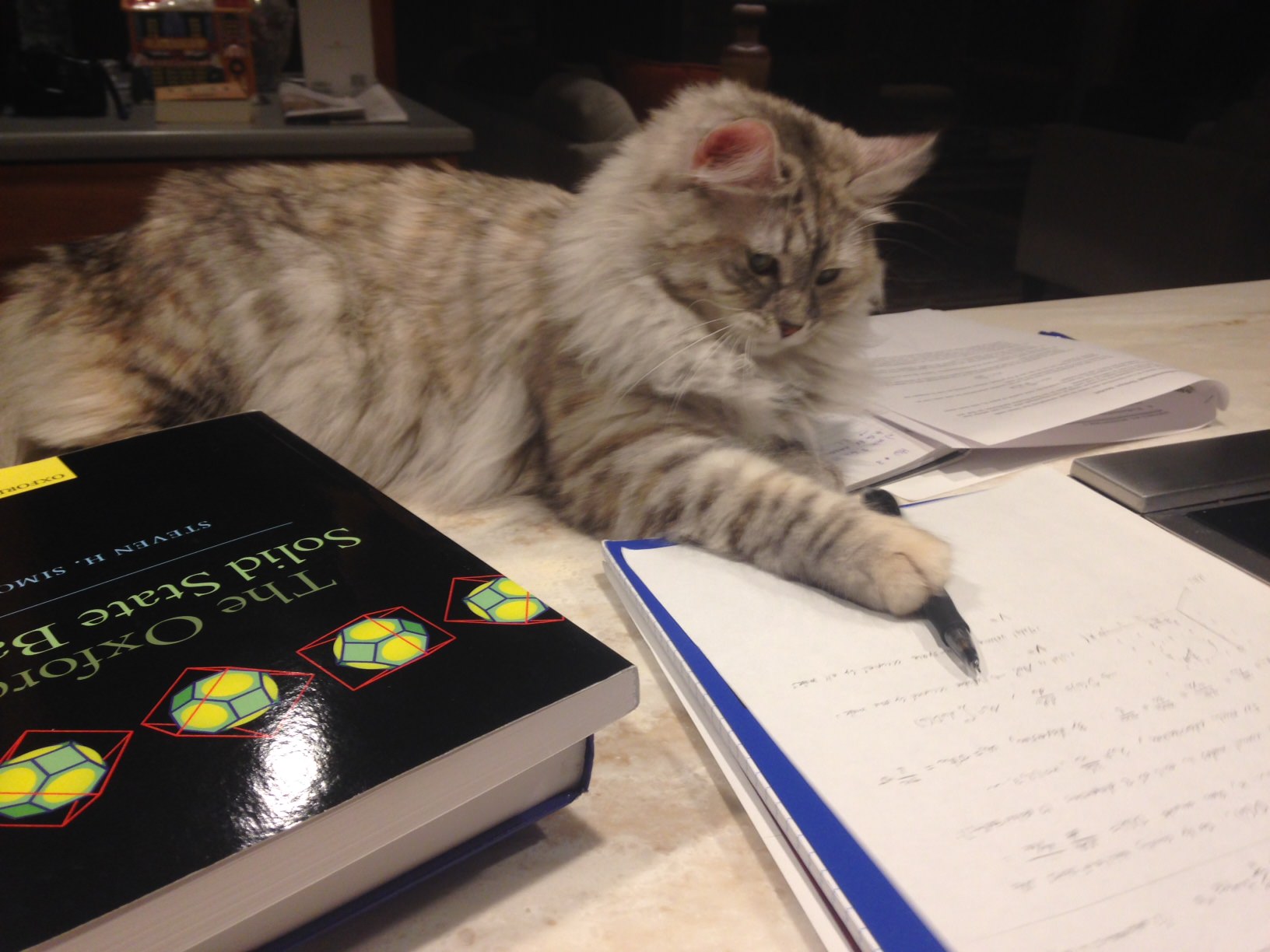 Watsisname, cute!! looks like my cat when i try to study.
it is very beautiful cat too!