A-L-E-X wrote:
Source of the post I'm interested in infrasound.  Is it true that it can cause feelings of paranoia and even hallucinations among people?

Well, audio noise itself certainly has ill effects on health, and it's not unreasonable to think that it can extend to the inaudible range, but it's harder to imagine people being significantly more sensible to infrasound noise than audible noise.
NIL DIFFICILE VOLENTI
Top
midtskogen

There is another new hurricane formed. It was Hurricane Harvey (August 17) then now Hurricane Irma (September 3). it will come to Florida and The East Coast 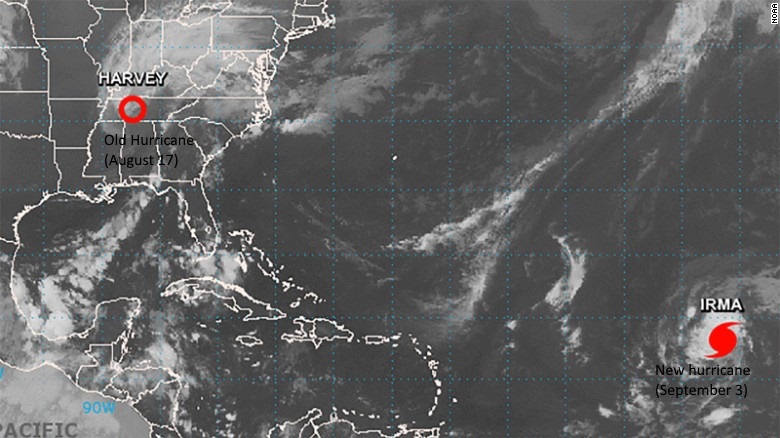 the path is unsure yet. some models show it will hit florida and east coast. some show new york being hit and some show that the hurricane will change path back to the north atlantic ocean. nothing is sure yet. we need to wait and be sure
"man cannot discover new oceans unless he has the courage to lose sight of the shore"
-Andre Gide
Top
Spacer

DoctorOfSpace wrote:
Who could have guessed, weather is a very complex phenomena that is hard to predict

Yes and here we want to add it to SE

I have been following the different models and no one is sure of anything yet.  How many years/decades/centuries lol before you think we could artificially weaken and disrupt these storms by simulating natural processes that do it, Doc?
Top
A-L-E-X

A-L-E-X wrote:
Source of the post I'm interested in infrasound.  Is it true that it can cause feelings of paranoia and even hallucinations among people?

Well, audio noise itself certainly has ill effects on health, and it's not unreasonable to think that it can extend to the inaudible range, but it's harder to imagine people being significantly more sensible to infrasound noise than audible noise.

Sorry I meant to post this earlier but got sidetracked by the hurricane.
https://en.wikipedia.org/wiki/Infrasoun ... _reactions

Human reactions[edit]
20 Hz is considered the normal low-frequency limit of human hearing. When pure sine waves are reproduced under ideal conditions and at very high volume, a human listener will be able to identify tones as low as 12 Hz.[33] Below 10 Hz it is possible to perceive the single cycles of the sound, along with a sensation of pressure at the eardrums.

From about 1000 Hz, the dynamic range of the auditory system decreases with decreasing frequency. This compression is observable in the equal-loudness-level contours, and it implies that even a slight increase in level can change the perceived loudness from barely audible to loud. Combined with the natural spread in thresholds within a population, its effect may be that a very low-frequency sound which is inaudible to some people may be loud to others.

One study has suggested that infrasound may cause feelings of awe or fear in humans. It has also been suggested that since it is not consciously perceived, it may make people feel vaguely that odd or supernatural events are taking place.[34] Engineer Vic Tandy provided such an explanation in his investigations in the 1980s. Tandy, while working in his laboratory, started to feel uneasy and as if a supernatural presence was with him. Later, he could attribute these feelings to a broken metal fan was causing noises of a frequency that triggered them. The noise could not be perceived by the human ear, but Tandy's body reacted to the 19Hz sounds.[35]

A scientist working at Sydney University's Auditory Neuroscience Laboratory reports growing evidence that infrasound may affect some people's nervous system by stimulating the vestibular system, and this has shown in animal models an effect similar to sea sickness.[36]

In 2006 research about the impact of sound emissions from wind turbines on nearby population, perceived infrasound has been associated to effects such as annoyance or fatigue, depending on its intensity, with little evidence supporting physiological effects of infrasound below the human perception threshold.[37] Later studies, however, have linked inaudible infrasound to effects such as fullness, pressure or tinnitus, and acknowledged the possibility that it could disturb sleep.[38] Other studies have also suggested associations between noise levels in turbines and self-reported sleep disturbances in the nearby population, while adding that the contribution of infrasound to this effect is still not fully understood.[39][40]

In a study at Ibaraki University in Japan, researchers said EEG tests showed that the infrasound produced by wind turbines was “considered to be an annoyance to the technicians who work close to a modern large-scale wind turbine.”[41][42][43]

Infrasonic 17 Hz tone experiment[edit]
On 31 May 2003 a group of UK researchers held a mass experiment, where they exposed some 700 people to music laced with soft 17 Hz sine waves played at a level described as "near the edge of hearing", produced by an extra-long-stroke subwoofer mounted two-thirds of the way from the end of a seven-meter-long plastic sewer pipe. The experimental concert (entitled Infrasonic) took place in the Purcell Room over the course of two performances, each consisting of four musical pieces. Two of the pieces in each concert had 17 Hz tones played underneath.[44][45]

In the second concert, the pieces that were to carry a 17 Hz undertone were swapped so that test results would not focus on any specific musical piece. The participants were not told which pieces included the low-level 17 Hz near-infrasonic tone. The presence of the tone resulted in a significant number (22%) of respondents reporting feeling uneasy or sorrowful, getting chills down the spine or nervous feelings of revulsion or fear.[44][45]

In presenting the evidence to the British Association for the Advancement of Science, Professor Richard Wiseman said "These results suggest that low frequency sound can cause people to have unusual experiences even though they cannot consciously detect infrasound. Some scientists have suggested that this level of sound may be present at some allegedly haunted sites and so cause people to have odd sensations that they attribute to a ghost—our findings support these ideas."[34]

Suggested relationship to ghost sightings[edit]
Psychologist Richard Wiseman of the University of Hertfordshire suggests that the odd sensations that people attribute to ghosts may be caused by infrasonic vibrations. Vic Tandy, experimental officer and part-time lecturer in the school of international studies and law at Coventry University, along with Dr. Tony Lawrence of the University's psychology department, wrote in 1998 a paper called "Ghosts in the Machine" for the Journal of the Society for Psychical Research. Their research suggested that an infrasonic signal of 19 Hz might be responsible for some ghost sightings. Tandy was working late one night alone in a supposedly haunted laboratory at Warwick, when he felt very anxious and could detect a grey blob out of the corner of his eye. When Tandy turned to face the grey blob, there was nothing.

The following day, Tandy was working on his fencing foil, with the handle held in a vice. Although there was nothing touching it, the blade started to vibrate wildly. Further investigation led Tandy to discover that the extractor fan in the lab was emitting a frequency of 18.98 Hz, very close to the resonant frequency of the eye given as 18 Hz by NASA.[46] This, Tandy conjectured, was why he had seen a ghostly figure—it was, he believed, an optical illusion caused by his eyeballs resonating. The room was exactly half a wavelength in length, and the desk was in the centre, thus causing a standing wave which caused the vibration of the foil.[47]

Tandy investigated this phenomenon further and wrote a paper entitled The Ghost in the Machine.[48] He carried out a number of investigations at various sites believed to be haunted, including the basement of the Tourist Information Bureau next to Coventry Cathedral[49][50] and Edinburgh Castle.[51][52]
Top
A-L-E-X

That was a big one.  Mexico earthquake, recorded in my basement in Oslo. Wow, that was magnitude 8.1.  Might be on average just one of those a year.  Great recording!
Top
Watsisname

Watsisname wrote:
Wow, that was magnitude 8.1.  Might be on average just one of those a year.  Great recording!

Weird this is the third time in recent years that I've noticed an earthquake occurring near the landfall time of a hurricane.
Top
A-L-E-X

So, during the past couple of weeks in the Gulf area there have been a cat5 hurricane, a cat3 hurricane dropping >1000mm rain, a M8.1 earthquake, and off Earth the sun has had two major eruptions.  What next, a major volcanic eruption and an asteroid impact?
NIL DIFFICILE VOLENTI
Top
midtskogen

Maybe that eclipse was a sign of the end times after all.
Top
Watsisname

Watsisname wrote:
Maybe that eclipse was a sign of the end times after all.

With respect to earthquakes, aren't we in a greater than average time period for them right now anyway- Subduction quakes seem to occur in clumps or groups.  Also, I read in a Nature research article that certain kinds of weather can serve as predictive tools for earthquakes.
Actually being in "end times" would be a positive, humanity does its best work when it's under pressure.

Hurricane is a high end Cat 4 now but everything I am reading indicates this is only temporary as it's undergoing an eyewall replacement cycle and as the new eye tightens up the pressures will drop and the winds will increase again.

I'm happy I fixed my texture problem at least.  Stars look much better too.