A few years ago, I came up with the most complete simulation game of human interaction ever conceived, inspired by this thread on Civfanatics about what the perfect game would be.

I believe that politics can be simulated completely in a 3D setting, with a real, emergent civilization consisting of individuals. There would be a reproducing population of humans in an Earthlike environment. Gameplay would be divided between 'God mode' and control of an individual, and you'd be able to switch between the two at any point.

Every human being has five elements:

Their diseases, injuries or scars, need for air or nourishment, level of exhaustion, strength and muscle mass, etc. If they are 6'2 or they have a harelip or are circumcised, it gets shown here (along with a basic 'genome' to determine heritable traits and appearance).

Their primary mental state. Think of something along these lines:

There would also be more normal, static modifiers like 'patient' or 'ambitious.'

Their fundamental value in life. This decides the beliefs that they hold, how they respond to situations, what goals they have, and how they behave in regards to their surroundings. For example, someone who values material growth would seek the freedom to profit in their station, and reject patriarchal or communal ideas. Someone who values survival would consider only their own needs or those of their immediate family. Someone who seeks knowledge or meaning would probably join a cult or become a philosopher, and would tend to favor fundamental theories over practical ideas. Etc.

Emotional and physical triggers are the determining factor in outlook (a person who lives in constant fear for their life will value survival, but that gets less common the more peaceful and wealthy the society they live in). Outlooks can change in periods of transition or stress.

Basically a tech tree. Every person has ideas; these are what constitute their knowledge. Furthermore, while certain ideas may require an individual to have prerequisite ideas before they can be discovered by them, these may not apply to the idea being taught to one person by another. The average person's ideas will shift over time as their society advances, and they may cease to learn earlier ones even if their own ideas were derived from them (most real-life people would not be able to rebuild a modern society from scratch even if they could fix computers or drive a truck).

Each idea has four levels of knowledge, with varying rules for transmission:

Level zero: This is knowing that the idea exists, but not knowing what it is. If primitive archers are fired at by cannons, they can associate it with killing at a distance, but they won't actually realize it works by exploding powder launching a projectile. This produces awe or fear, depending on the circumstances.

Level one: Having a basic understanding of an idea. Wouldn't be too useful, but helpful to have.

Level two: Being educated with an idea. Such a person, for instance, could grow corn and fix a broken staircase, but would not be able to maximize their crop yield or to build a staircase from scratch.

Level three: Understanding an idea completely. These people could teach their ideas to others far more efficiently than level two, and almost all innovation would require this level.

How to invent an idea? If a person knows the prerequisite idea(s), than engaging in certain actions accumulate "points" which give a chance of inventing that idea. These actions need not be deliberate. A mathematician may sit down and systemically work out geometry, or an officer can think of a brilliant new tactic after being repulsed by the enemy. For most ideas the actions required are rather complex. To take our example of an officer inventing a tactic, based on what he did on a given month:

That's an extremely rough concept - the conditions could be made into anything imaginable. The officer still needs quite a bit of luck to actually invent the idea, since these modifiers only last the month, although I suppose there ought to be a small, permanent bonus for accumulating enough points.

Certain ideas have opposing counterparts. A person may believe one idea over another competing idea (this doesn't affect knowledge of them). The outlook of a person decides which idea he takes as a belief. Here's some concept art, with the numbers corresponding to levels of knowledge: 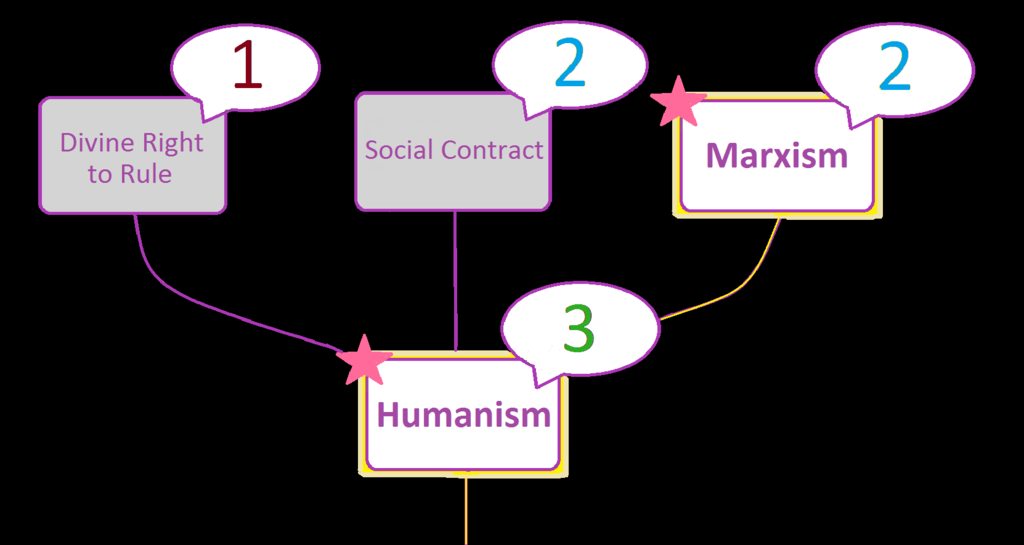 As seen here, the person fully comprehends the idea of humanism and has studied its various offshoot ideas. He believes in Marxism, which requires him to believe in its parent ideas as well.

Sometimes beliefs develop that support each other mutually, and are transferred more or less wholesale between humans. These are doctrines. They mean that ideas which aren't really dependent on each other can occasionally be intertwined. For creating a doctrine, just imagine something like this, based on ideas.

A person's awareness of the physical world. As well as keeping track of active objects (such as other people, animals, storms, etc.) this takes the form of a 'map' for each person. Information is gathered about the world either through viewing it or through interacting with others. However, physical maps (which would require cartography-related ideas to create) are very important, since the maps in people's heads are extremely inaccurate on large scales and degrade if not constantly refreshed.

There are four main components that make up the political gameplay:

This game will attempt to emulate a societal consciousness. Any person that is aware of another person has an attitude towards them. Actual interaction between people is not necessary for this; for instance, a king's visage on a coin is enough to create an attitude towards him among his subjects. It is communication that will create societies here, rather than an abstract modeling of 'culture.'

These are formed in societies that grow past a single extended family (they become better organized the longer they last). Their function is determined by consensus of their members and can be altered according to those members' priorities. They encompass everything from a warband to a school to a council of nobles. Each one has its own collective wealth, whether from patronage or their members' pockets, and they attract like-minded individuals through notoriety. However, the motives of their individual constituents will still exist - if their goals don't remain cohesive the group will fall into corruption or split up.

This is how much physical power any person has. You could call it a kind of 'sphere of influence.' The offensive value depends on what sort of damage a person can do: size and strength boosts it, but not as much as having a big axe. Any individual's power gradient can extend across the whole of the map, but is reduced exponentially in areas outside of their immediate location, depending on their ability to travel. Not many people will fight if they are under the influence of a larger power gradient, so this will allow an organized group of soldiers to dominate a much larger population.

Note that the values of gradients exist entirely in the heads of individuals. A row of spearmen in formation, for instance, might see charging horsemen as having a lower value than some scattered swordsmen would. Those same spearmen, not knowing of gunpowder, would assign a row of riflemen a very low score until they started firing. Scores can change even on an individual basis. A warrior that kills five others, or a line of chariots that smashes an enemy's formation will be assigned higher scores by their opponents than they normally would. I can imagine a very skilled general winning victories and gaining lots of momentum from this. As well as individual soldiers/groups, this boost can permanently alter how certain types of weapons are seen by an entire society, serving as an all-purpose corrective to the game's balance.

Applying a power gradient to groups or armies will be some combination of a single score, the scores of its various subgroups, its overall leader, and every one of its individuals. It's not something I can answer without actually making the game myself.

Groups create and enforce certain rules upon themselves and those they have influence over. This is probably the most unemergent aspect of the game, with certain actions being canned and made contingent on ideas (property, customs, rank, etc). They are still triggered through emergent pressures, though.

I originally thought that every object in the game would be assigned a value by every person, so that someone who wanted a sword would value both currency and a blacksmith with swords for sale, and set prioritized goals to first acquire currency and then seek out a blacksmith. But this is probably impossible... right?

Before you post, I want you to know that I already posted this idea on Civfanatics forum a year ago and received a variety of responses. You might want to look and see if your objection/comment has been brought up there already.

I don't have so much time now but I'll probably read all this very carefully one day.

I'd also like to have such a game, I have some experience in videogames developing so maybe when my projects will be over I might consider making a team to make this game true.