A-L-E-X wrote:
Source of the post Right now we have a superbug infestation going on in our local hospitals (Candida Albans) that's resistant to all antibiotics and the state is worried people will find out what hospitals have it so they refuse to reveal the info and the media isn't even covering it outside of one station (WABC).

Yes, it is a bit worrisome that there is nary but a mention of this global problem in the news, besides a few online blogs writing about it. I see this as a failure of the journalistic industry. They focus on new outbreaks of, admittedly still dangerous, Ebola half a world away in the Congo, and yet the lethal threat of superbugs invading our hospitals and food is being blithely ignored.

I guess honesty is an overrated trope in the media.

I probably wouldn't even know about it but I keep close track of these things- both my parents passed away from superbug infestations in hospitals.  Our overuse of antibiotics (not just as medication but also their use in farm animals) has really come back to haunt us.
Top
A-L-E-X

Gnargenox wrote:
Source of the post There's a candidate planet that may be close to confirmation. It's a 1.1±0.1 Earth-radius planet in a 365.4 day orbit around a 0.97 solar-radius sun. If it is confirmed, it would be the _first_ true Earth-analogue. Fingers crossed that they can confirm that it is indeed an actual analog. If so, needless to say it would be one of the closest we've ever got to detecting a Earth-twin exoplanet, and be an absolute must for a atmospheric spectroscopic observation. Despite all that, the chances of it actually bearing life are still slim.

Fingers crossed that they can confirm that it is indeed an actual analog. If so, needless to say it would be one of the closest we've ever got to detecting a Earth-twin exoplanet, and be an absolute must for a atmospheric spectroscopic observation. Despite all that, the chances of it actually bearing life are still slim.

What makes you say that it's chances of supporting life are minimal?
The only Astrogriff
Top
Messier

Messier wrote:
Source of the post What makes you say that it's chances of supporting life are minimal?

Perhaps it is my inner pessimist, but even if the planet is the perfect mass, has an atmosphere, and is within the HZ of it's star - that does not automatically mean it will support advanced biological life (by advanced, I don't mean technological, just multicellular). There are a lot of factors that go into life arising on a planetary surface, and while I don't think the environment has to be exactly Earth-like to support abiogenesis, there are still other nuances that are involved in organic life forming which are not purely addressed by the mass and orbital properties of the planet. I do think we can detect life on a exoplanet with the upcoming missions we have planned. However, it would be foolish to say that the exoplanet automatically has life on it because of its similar physical properties to Earth.  Overall, the chances of any one exoplanet having life seem minimal when all factors are taken into consideration.

This discovery of the Earth-analog candidate is really exciting though, and further proof that at least in basic physical properties, Earth is not that rare in the cosmos.
Futurum Fusionem
Top
Stellarator

Being the only detectable planet in the system and having low stellar metallicity (Sun’s 40%), the planet is highly likely to have formed in situ and formed rocky like Earth.

Gnargenox wrote:
Source of the post There's a candidate planet that may be close to confirmation. It's a 1.1±0.1 Earth-radius planet in a 365.4 day orbit around a 0.97 solar-radius sun. If it is confirmed, it would be the _first_ true Earth-analogue.

JD you already made an addon for it?!  Can we download it?

Stellarator, complex life might be rare, but microbial life might be fairly common.  Even things like lichen can live on the exterior of the ISS and quite possibly on Mars.
Top
A-L-E-X

Thanks for the additional info G!

I am curious to see if they know how old the system is. That could really solidify any notion of habitability. If it is younger then a few hundred million years, it's habitability would be precocious. If the system is very old on the other hand, then the planet might have only recently found itself in the HZ as its parent star slowly heated up during its main sequence.
Futurum Fusionem
Top
Stellarator

I heard there is news that the electron has been mapped?
Top
A-L-E-X

A-L-E-X wrote:
Source of the post I heard there is news that the electron has been mapped?

Not exactly.  An electron doesn't really have a fundamental shape or geometry to it.  Rather, how it is distributed in space (specifically, the probability of finding it, as a particle, in some region of space) depends on the situation.  The probability is given by the square of its "wave function", and the shape of the wave function depends on its energy and the manner in which the electron is contained (or not).

An electron trapped inside of a box (a square potential well) will instead look like a standing wave, much like the vibration of a plucked guitar string.  And just like how there are only specific notes that a certain string will make for its length and tension, an electron trapped in a box can only have certain allowed values of energy.  Here's an illustration (wave function at left, probability distribution at center, and energy levels at right). 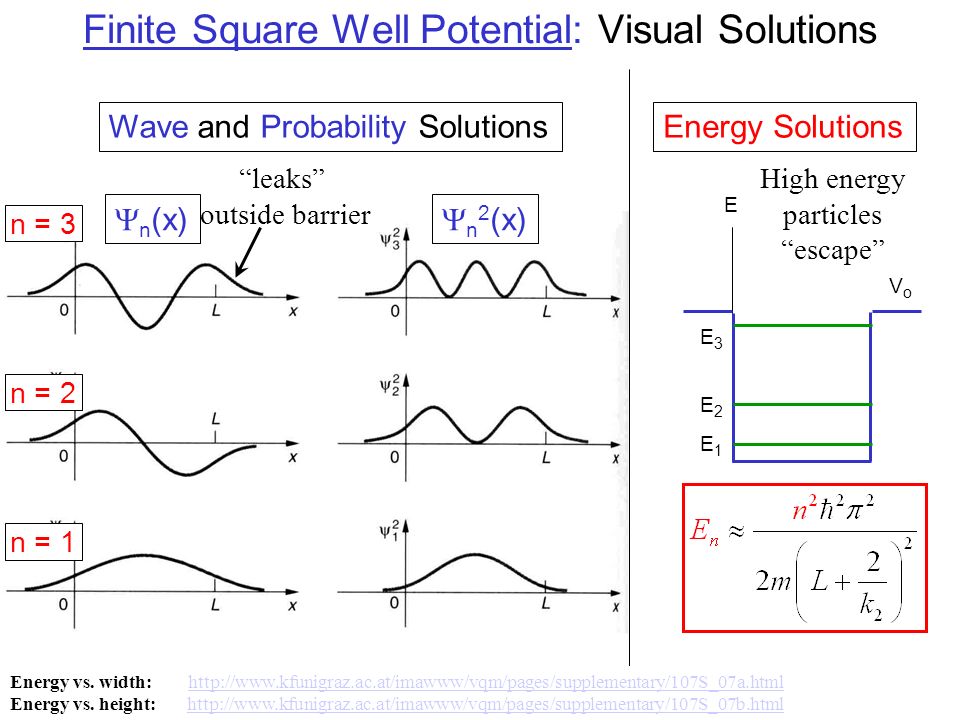 What they did in this recent study was map out the wave function / probability distribution for electrons trapped in a "quantum dot", which is a specific type of potential well that acts a lot like an artificial atom.  An electron in a quantum dot is allowed only certain energy levels, which can be fine tuned by the size and geometry of the dot.

This is very interesting and useful (particularly for studying further technological applications of quantum dots), but as a way of "mapping the electron" this is isn't new.  The "shape" of the electron has already been directly imaged in hydrogen atoms, and with the Schrodinger equation it is possible to compute it for almost any other imaginable situation.

Thanks, Wat, as a fundamental particle (particularly since particles aren't really particles but hybrid particle-waves), it sounded weird that it would be mapped geometrically, this sounds more like a probability function.  Can this be done with every particle?  How about for the positron?
Top
A-L-E-X

Yes, exactly.  If you have a quantum particle confined in a box, you can't predict where exactly a measurement will find it.  Instead you can only predict the probability of finding it at various locations.  That's what they mapped out in this situation, and what the probability distribution will look like depends on the particle's mass, energy, and how it is confined.

A-L-E-X wrote:
Source of the post Can this be done with every particle?  How about for the positron?

In principle, sure.  An easy example that can even be done at home is with photons.  Pass a laser through a very small hole, and it will diffract and produce an interference pattern on the other side.  For a laser this pattern can be thought of as the amplitude of the electromagnetic wave associated with the light, or equivalently as the number of photons that reach various locations.  But the same pattern will appear even if you fire single photons at a time.  Then the interpretation is that the pattern represents the probability function for the photon after it has passed through that opening.

My avatar image is an example of this, too.  It's a photograph of the pattern formed by a laser after passing through 3 small holes arranged in a triangle.  But we can also say it is a map of the probability function for a photon after passing through those holes.  It doesn't simply make 3 spots on the other side as Newtonian intuition would suggest. Instead the photon wave function spreads out and interferes with itself in a complicated way and generates a beautiful complex, but symmetrical, pattern.  The pattern depends on the energy of the photon (wavelength of the laser), and the size and shape of the opening(s) it passes through.  Smaller openings will counter-intuitively make the pattern larger. 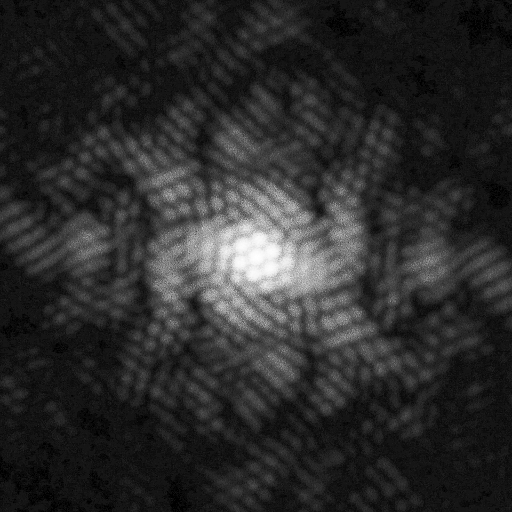 Wow Wat that looks somewhat like the kind of waves you might see on a beach!  Or more like the overlapping of two waves, where they sometimes reinforce each other and sometimes cancel each other out!

And when you mentioned a smaller opening making the pattern larger I couldn't help but think of how a smaller aperture in a camera lens increases the depth of field!

Wat, I wanted to get your take on this, I posted this in the conspiracy thread too but no one has seen it yet, and it isn't really a conspiracy, the military acknowledges it and says they dont know what it is but it's been happening for years and people have been afraid to talk about it.

This has been all over the news around here


Experts were careful to note that there are many non-alien explanations for these unexplained sightings. Still, this isn’t the first major report on UFOs in recent years. In December 2017, the Times published a story about the Pentagon’s Advanced Aerospace Threat Identification Program, which shut down in 2012, and described “sightings of aircraft that seemed to move at very high velocities with no visible signs of propulsion, or that hovered with no apparent means of lift.” In 2018, a UFO research group shared a declassified Pentagon video which supposedly showed a U.S. Navy aircraft encountering a UFO.

Updating this post because GMA conducted an interview with military personnel- the sec'y of defense came out and said that there are only two possible explanations- extraterrestrial or another nation with technology far in advance of what the US has.