It is said that this is a photo about Sagittarius A*.
Related introduction (Transfer from http://blog.sina.cn/dpool/blog/s/blog_1 ... 2yi0z.html):
On April 1, the European Commission, the European Research Council, and the Event Horizon Telescope (EHT) announced that they will hold a joint press conference on April 10th.  The world has demonstrated the major research results of the ground-breaking telescope.
It is understood that the press conference will be released simultaneously in Brussels, San Diego, Shanghai, Taipei, Tokyo, and Washington in four languages: English, Chinese, Spanish and Japanese, highlighting EHT's international cooperation spirit.  This international cooperation project has also received funding support from the Academy of Sciences and the Ministry of Science and Technology.  Participating in EHT research institutes, there are many research institutes of the Chinese Academy of Sciences and the Observatory, the National Science University, Huake University, Nanda University, Zhongda University, Peking University, China University of Science and Technology, and Taiwan University.
EHT has built a virtual telescope with a diameter equal to the diameter of the Earth for black hole detection through the collaboration of Very Long Baseline Interference Technology (VLBI) and multiple radio astronomy stations around the world.  The industry generally believes that EHT has received the first black hole photo in human history and will be announced at the press conference on April 10.  According to an informed source who disclosed the name, EHT released the observation data of Sagittarius A* (Sagittarius A*), which took more than two years.  Sagittarius A* is a super-quality black hole in the center of our galaxy, which is surrounded by star dust and gas, compared to 4.02 ~ 4.3 million suns.  As everyone knows, black holes engulf everything, including light.  Therefore, the EHT will only publish an image of the "event horizon", the image at the edge of the black hole.
Regarding what this image looks like, this will be the first time that humans have seen the black hole after hearing the black hole gravitational wave a few years ago. It is another limit verification of Einstein's general theory of relativity.
Einstein's general theory of relativity predicts that black holes not only exist, but also "behind the scenes" of some extreme phenomena in the universe.  Its body is small, its mass is very large, and it has a very strong gravitational force. In a certain area around it, even light cannot escape.  This area is also known as the "event horizon."  The "Event Vision Telescope" actually attempts to observe the "event horizon" of the black hole.
When the black hole swallows the surrounding material, it forms a rotating accretion disk. The radio waves generated by the friction of the substances can pass through the dust and reach the earth and be captured by the radio telescope.  However, the resolution of a single radio telescope is too low, even if the diameter of up to 500 meters, the world's largest eye, is not enough.  EHT therefore networked radio telescopes around the world to form an Event Vision Telescope (EHT) with a mirror diameter equivalent to the distance between the telescopes, reaching the entire Earth's diameter and increasing its resolution enough to capture black holes in the center of the Milky Way.
According to reports, the "Event Vision Telescope" has collected information on two super black holes, one is the "Sagittarius A*" in the center of the Milky Way, and the other is located in the center of the super-large elliptical galaxy code-named M87.  Sarah Markov, a professor of astrophysics at the University of Amsterdam in the Netherlands, said that the photo taken by the "Event Vision Telescope" will be a true aerial view that will help us understand why black holes can have a profound impact on the celestial bodies in the universe.
Last edited by LBV 2012-26 on 18 Dec 2019 19:19, edited 2 times in total.
Top
LBV 2012-26

I'm very psyched about this, to say the least. This might be one of the most historic astrophotographs, right up there in the history books along with the results of Hubble's Deep Field surveys.
Futurum Fusionem
Top
Stellarator

A number of us will be on the Space Engine Discord server watching and discussing the press conference as it happens.  The conferences start at 13:00 UTC and there will be several of them held simultaneously with live streams available.  Check the media advisory for details.

Countless terabytes of scientific data to be condensed into an image for an audience familiar with the Interstellar imagery, what could possibly go wrong?

More seriously, what they'll show today will be interesting, but perhaps even more interesting will be what they've learnt which is not suitable to represent in an image.
NIL DIFFICILE VOLENTI
Top
midtskogen

First reaction: How boring, looks just like the predictions. Do we know already what there is to know?
NIL DIFFICILE VOLENTI
Top
midtskogen

midtskogen wrote:
Source of the post First reaction: How boring, looks just like the predictions. Do we know already what there is to know?

One immediate revelation from the image is that it has solved a discrepancy between different indirect methods of measuring supermassive black hole masses.  Now we can measure directly by the size of the shadow, and it turns out the higher previous estimates were correct.

There are tons of scientific studies that are now possible due to being able to make these images.  Not just for testing General Relativity in the strong regime, but also for our understanding of accretion disks around black holes and the formation of jets.

Personally I still can't quite put into words what this first image release feels like for me.  In science we usually work with plots of data whose interpretation and importance may be abstract and arcane, but there's something incredible about actually seeing the thing you've been studying but could never before see.  Like the first photograph of atoms.
Top
Watsisname

The press conference is over, it is actually a photo of the M87 black hole, not Sagittarius A*, but still excites me.
Top
LBV 2012-26

Stellarator wrote:
I'm very psyched about this, to say the least. This might be one of the most historic astrophotographs, right up there in the history books along with the results of Hubble's Deep Field surveys.

At first, i thought it was a photo from Sagittarius A* as well. But who cares, it's the first visual prove of black holes like predicted in Einsteins theory of relaticvity and thats a huge milestone for astronomy and physics!
And after all, M87 is the biggest Galaxy in the Virgo Supercluster, the Cluster we belong to and here we see the big, humongous mass monster in the centre of it, the main gravitational point of the super cluster! That's just amazing!

Will the resolution of the picture be higher when all the data has been evaluated?
Top
Typbürste

I had a slight hope that they would present something unexpected in the image and could say that this was something we hadn't thought of but it makes sense now and here's why.  Would be more exciting.

A major breakthrough is that there has been established a method for such imaging.  The image looks like a perfect proof of concept.  It can only get better from here.
NIL DIFFICILE VOLENTI
Top
midtskogen

There is an excellent pair of video about it here. One explaining what is expected and how the appearance works in accordance to relativity.

The other is the results.

Just to avoid any confusion, that image of SgrA* shown by Veritasium is based on simulations, not real data.  EHT has not released an image of SgrA* yet, though that is in the pipeline.

Randall of XKCD has made a nice size comparison to give some sense for how big M87's black hole really is.  It's a monster, at ~6.5 billion solar masses. 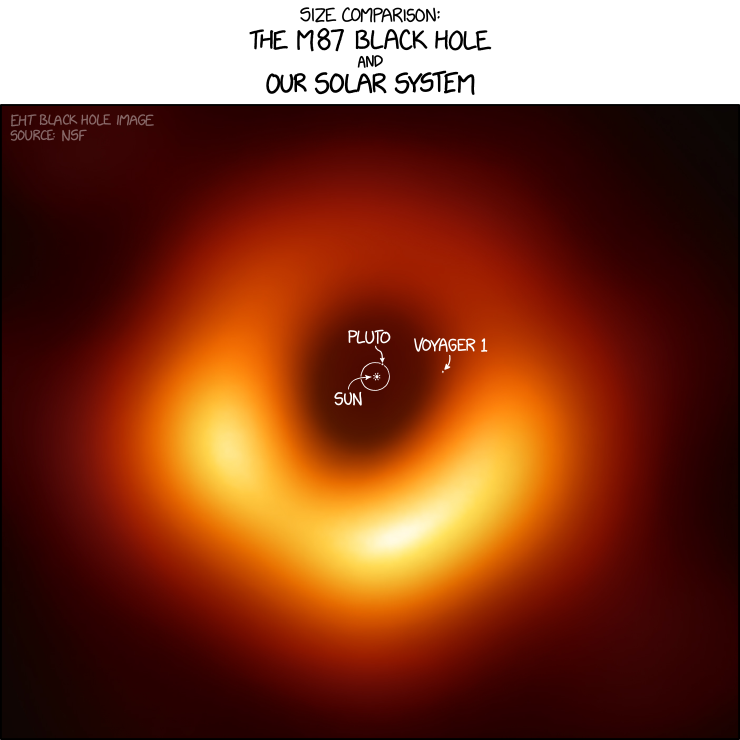 If you were to freefall into it (starting from rest just above the horizon and assuming no spin for the black hole), then after crossing the event horizon, it would take you another 28 hours to reach the center, as measured on your own clock.

For SgrA*, you would instead have just over 60 seconds.
Top
Watsisname

Watsisname wrote:
Source of the post it would take you another 28 hours to reach the center, as measured on your own clock.

If you cross the event horizon at an angle, would that change?
NIL DIFFICILE VOLENTI
Top
midtskogen
Post Reply