1) Probably about what you would expect to result from this situation: something bad.
(yes, this is to scale, or at least as best I can manage with a measuring tool) 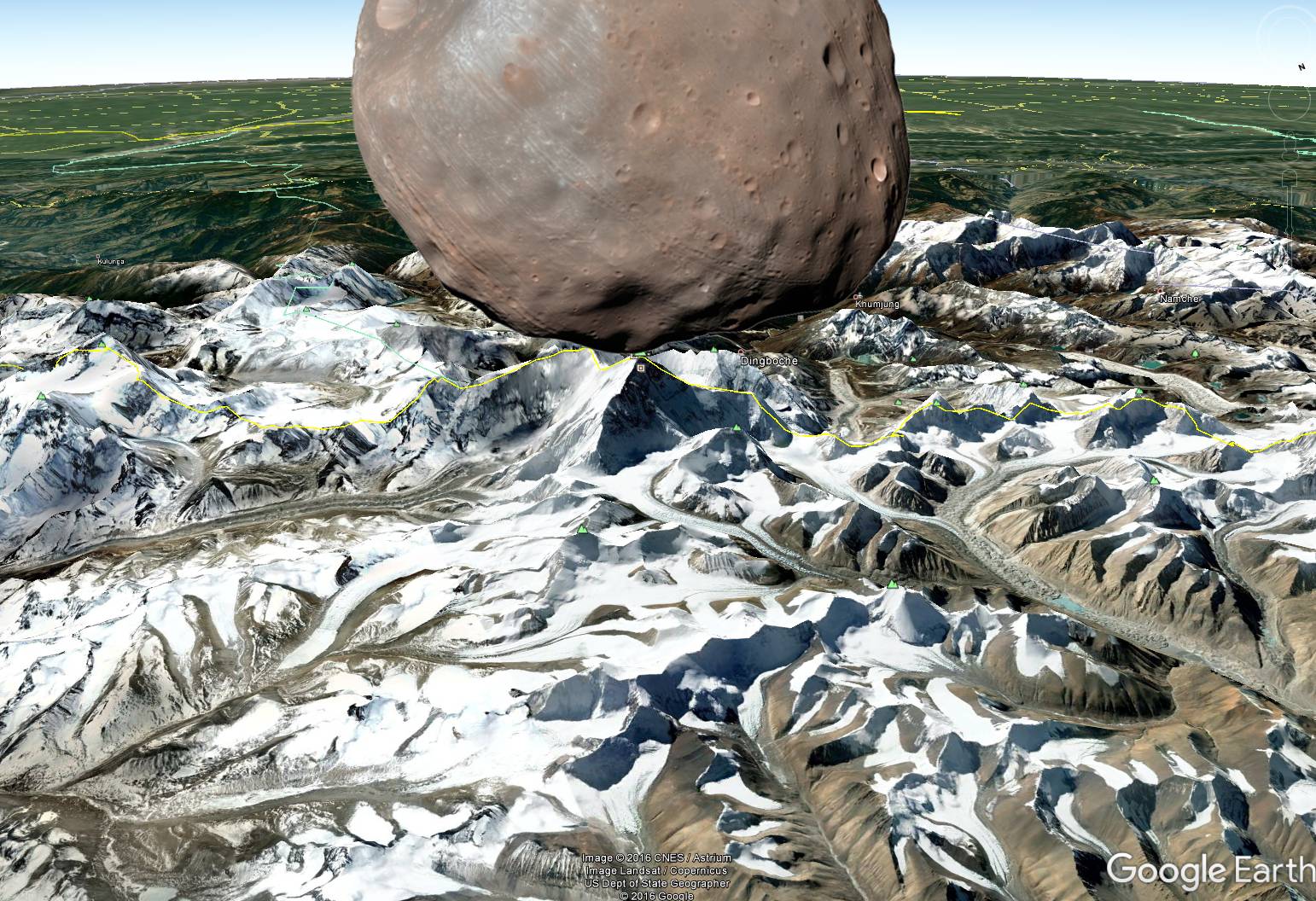 Phobos would quickly cease to be an asteroid, and Chomolungma would quickly cease to be Mother of Mountains.  In a spectacular cascade of collapsing rock, the landscape would be changed forever -- mountains and valleys scoured clean in an expanding disk of rubble behaving more like a fluid than a solid.  The energy released in this collapse is on the scale of 200,000 megatons of TNT, or about 10 million Hiroshima bombs.

Moving with it will be a huge displacement of the atmosphere.  A similar effect happens with large pyroclastic flows, where a violent wind capable of shattering trees surges well in front of the main mass of volcanic ash and rock.  Except in this case, it's not a piece of the mountain rushing downhill that's causing it -- it's the entire mountain plus a minor moon.

How far this devastation would reach is hard to say, but it should suffice to conclude that I would not want to be among those mountains on that day.

2)  Same deal, just replace the Himalaya with the landscape around the South Pole.

3)  A very big splash, lots of rubble among the trench.  I would not want to be on or near the Pacific Ocean on that day.

4)  Meteor crater is in Arizona, but either way, I'll let the image do the talking: 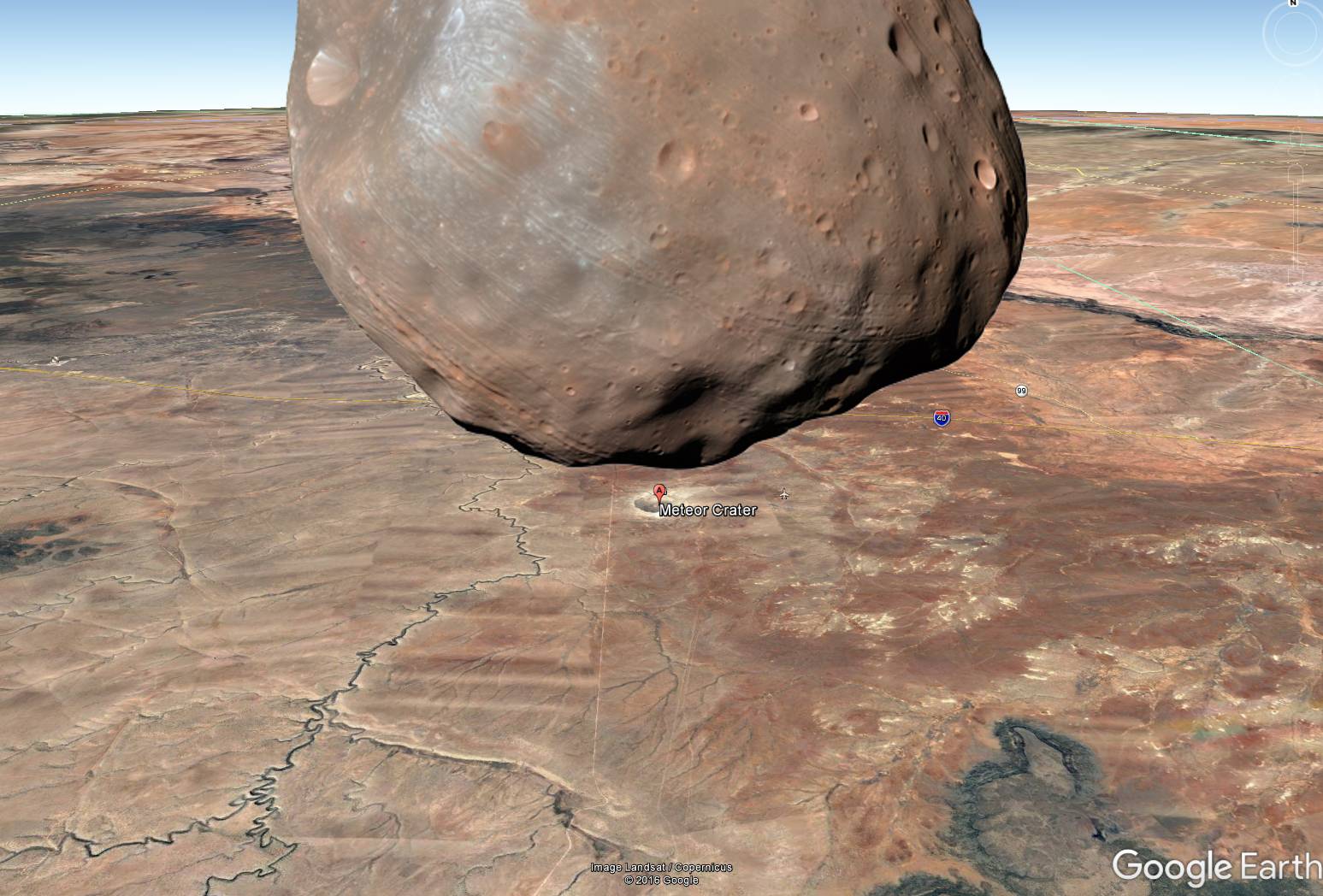 Tsar Bomba was only 25 Megatons. So scaling that up..

200 Gigatons would be catastrophic for our planet, The blast alone would topple buildings in New York, The seismic effects could possibly cause techtonic activity as Everest is on a faul(It would make it's own anyway). The thermals of the explosion wouldn't really be put into consideration as the blast and seismic attributes would reach further.

The dust cloud created would take about a year at most to clear and cause a 'nuclear winter' effect.

It's not a 'Extinction level event', However it would end our current civilization.

Then nothing would really happen, The only thing a moon would do is cause tidal stresses. Mars and Venus are where they are becuase of different issues. Mars for instance is too small to maintain an active core, Becuase of that it lost it's core and in turn lost it's magnetic field. No magnetic field -> No atmosphere.

Quontex wrote:
Source of the post 200 Gigatons would be catastrophic for our planet, The blast alone would topple buildings in New York, The seismic effects could possibly cause techtonic activity as Everest is on a faul(It would make it's own anyway). The thermals of the explosion wouldn't really be put into consideration as the blast and seismic attributes would reach further.

Well, this isn't a nuke with 200GT yield.  The energy is in the gravitational potential of an entire moon, and on a per unit mass basis it's pretty small (like ~2% the energy density of TNT).  So it's not released like a massive explosion, but rather a huge collapse of material.  Most of the energy is spent in shattering rock and sweeping it out over the surrounding landscape.
There is definitely potential for some other very catastrophic results, though.  It's a lot of mass to add to an area.  It would deform the crust beneath it and cause extreme seismic and volcanic activity.
Top
Watsisname

What if Cali orbited Earth? Distance and mass is the same as pictured. Starlight Glimmer wrote:
Source of the post What if Cali orbited Earth? Distance and mass is the same as pictured.

If Cali replaced the moon, probably stronger tides and that's it. If Cali was orbiting at the same time as the moon, it would probably collide with the moon, which would not be good news for us humans

@Xoran
Well, you do make a point there but I wanted a more in depth explanation of what would really happen.
Top
Cantra

Yes, Humans or earth life as a whole are fairly adaptable when we need to be. Humans can adapt and live in pretty extreme environments, Only problem is you would need to acclimatise yourself first.

This is a post by Watsisname talking about breathable atmosphere and the like, Should find your answers there.

We would change our physiology depending on our environment, However developing wings is a bit of a stretch. We would change is relation to our environment, For example we would be taller on the moon due to the lack of earth-like gravity. Alongside the fact thier bone structure would deteriorate and they would be unable to come back to earth, If they remained for a long period of time.
Specs: i5 6600K - No OC / GTX 960 FTW - @ 1380mhz OC / 16GB of RAM / 256GB SSD / 2TB HDD
Top
Quontex

There is a range of atmospheric conditions in which humans can live without the need for life support, though it is likely to be very small compared to the range of conditions we can expect to find on "habitable" terrestrial planets in nature.  Acclimatization does help boost the survivable range a little bit, but not a whole lot.  In general, worlds for which humans can comfortable settle by just letting our bodies adapt to it are probably very rare and far apart.  Our knowledge is insufficient to be able to ascribe numbers to it, but in my view I would be surprised if there is any other planet in the galaxy that would work.

The good news is that our science and technology help us even further. We can of course survive in otherwise hostile environments with life support and shelters, but by the time we're an interstellar species we might expect that we could modify a planetary environment to better suit us.  We could also imagine that we may be able to genetically engineer ourselves to better suit the environments we wish to move to.
Top
Watsisname

So would Cali only cause larger tides?
Top
Cantra

Ah, recall back to our discussion on the old forum.  We can compute that its tidal force on the Earth would be about 30 times stronger than the Moon's, but it would also provide more light (it's closer and larger, though I don't know what its albedo is), and have a stronger influence on Earth's rotation rate.

There would also be a difference in the Earth's orbital-obliquity cycles, which is potentially very interesting for determining how glacial periods would play out, but much more difficult to compute.
Top
Watsisname

Makes sense. So Earth would probably be tidal locked to it? It would be interesting to see. I wonder what Primitive humans would think of it.
Top
Cantra

Yeah, the system would get mutually locked a lot more quickly.  I haven't time right now to compute the timescales though.

Imagining what life would be like on an Earth locked to its moon is very fascinating.

Good point. Here is the script for Cali. So you can play around with it as you like.