Abstract:
I will discuss recent results on the environmental context - astrophysical and planetary, that makes possible the synthesis of precursor molecules to RNA, peptides, and lipids. My focus will be on the role of stellar mid-range UV light from about 200 to 300 nm as a source of energy and as a very specific selection agent in chemical evolution.

. Don't be fooled by the title of this lecture, it's not a psuedoscienctific rant. I found the end conclusion to be much more eloquent.


Also, if possible, look into the Smolin–Susskind debate, and the Susskind-Hawking battle (the latter recorded in a book by Susskind entitled "The Back Hole War". Man that sounds cool!). It makes for good reading and a healthy scientific diet.

That was great ! A nice follow up on the same subject covered but PBS spacetime but explained in a fresh way I han't thought about before.
Top
vlad01

Watsisname wrote:
Source of the post Abstract:
I will discuss recent results on the environmental context - astrophysical and planetary, that makes possible the synthesis of precursor molecules to RNA, peptides, and lipids. My focus will be on the role of stellar mid-range UV light from about 200 to 300 nm as a source of energy and as a very specific selection agent in chemical evolution.

Very interesting stuff, as UV and its levels are pivotal to the development of life in the cosmos at large.  I was always interested as to what the absolute stellar UV limit is to prevent even very exotic life (like silicones polymers) from developing.

Yes, and a subject that has been a foci of misunderstanding for a long time. Too many times have people ridiculed the so-called 'holographic universe' theory based off of the name alone.

Only when they actually study it and attend to presentations made by erudite individuals who actually know what they are talking about, do they realize it holds water within established physics (well, okay maybe string theory is a bit far out

Ah, Susskind is always worth a watch anyways

Stellarator wrote:
Source of the post Ah, Susskind is always worth a watch anyways

I really like Susskind's presentation style, both in lecture and in his books.

Also, (and more on the theoretical side), you might enjoy hearing his ideas on the ER=EPR conjecture, if you aren't familiar with it already!
Top
Watsisname

Watsisname wrote:
Source of the post you might enjoy hearing his ideas on the ER=EPR conjecture, if you aren't familiar with it already!

I was not aware of that, but thanks for the heads up! I'll check it out.
Futurum Fusionem
Top
Stellarator

My black hole home doesn't have a neighbor. It's sad really... I could use the company.
Futurum Fusionem
Top
Stellarator

DoctorOfSpace, while we are at black hole mergers, scientists have observed a handful of stellar mass (more or less) black hole gravitational waves events. How often, statistically speaking, do binary supermassive black holes merge in the observable universe? I assume such events to be associated with galaxy collisions only. What are the chances of detecting gravitational waves from a supermassive BH merger within a lifetime?
Top
An'shur

An'shur wrote:
Source of the postWhat are the chances of detecting gravitational waves from a supermassive BH merger within a lifetime?

Quite good, actually!  The expectation is that LISA will be able to detect a few 10s or 100s of massive black hole coalescence events per year.

Massive black hole binaries result from galaxy mergers, as the central black holes find each other and spiral together pretty rapidly (within about 100 million years).  It has been a problem though to understand how, once they get to about 1 parsec apart, they manage to continue to spiral together to merging.  At distances much greater than 1 parsec the inspiral works efficiently by scattering stars, yet gravitational wave emission doesn't become too strong until scales much less than 1 parsec.  So for a while astronomers did not understand why we do not see large numbers of black hole binaries "hung up" with ~1parsec separations -- the "final parsec problem".

Lately this problem has been pretty much resolved, and it turns out there are actually several mechanisms that allow the inspiral to proceed all the way to coalescence.  Not only is that good for our understanding of mergers, it also means we are very likely to see the process in gravitational waves.  The entire population of massive black hole binaries in the universe produces a stochastic background of gravitational wave noise, which should be detectable in Pulsar Timing Arrays.  At least one of these systems should be nearby and massive enough to resolve individually above that background noise, as well.


What is the actual coalescence rate across the universe?  Estimates vary by author and model, but optimistically it may hundreds per year out to a redshift z=5, and pessimistically still about 10. 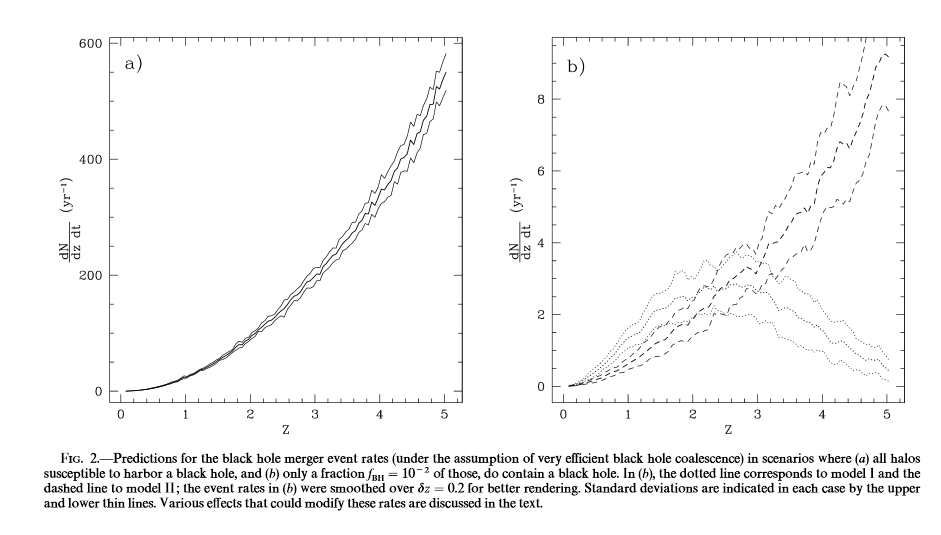 To interpret this figure, think of it as showing the number of events you expect to see per year, if you look out to a distance where the redshift is z, but happening within 1 unit of z of that distance.  So for example if you want to know how many total merger events there are per year within z=5, then you would add up the number in each z=1 interval out to z=5, which for the left figure is nearly 1000, and for the right image is 9 (model I) or 15 (model II).

Watsisname, thank you. I did not realize that galaxies collide all the time.

I was surprised by these numbers as well.  I did not expect that there would even be one detectable massive black hole merger event per decade, let alone many per year.  But I guess it's not really that the rate is high -- 1Gpc3 is a huge volume of space containing a lot of galaxies -- but that the waves from such a merger are very strong and detectable out to very large distances.

This also reminds me of the math behind the development of life being common or not in the universe.  The universe is very big, so even rare events must happen all the time.
Top
Watsisname

The first episode of John Michael Godier's Event Horizon podcast, a new channel comprised of interviews Godier does with eminent scientists of astronomy and astrophysics. This one was a interesting topic with an interesting interviewee.

The main reason I posted this is because Godier uses Space Engine footage at various parts in the video.